As the numbers of COVID-19 cases and deaths in India continue to mount, public health officials are carefully watching yet another looming threat: the appearance of mutations that could be making the virus circulating there more infectious or more capable of causing severe disease.

Scientists believe that the variants of SARS-CoV-2 responsible for this second wave of cases in India already include at least two mutations that make them more dangerous. These mutations are already familiar to COVID-19 experts. One is found in a variant first identified in South Africa, while the other is part of a variant believed to have emerged from California. Researchers believe that these two mutations may, respectively, make it easier for the virus to infect human cells, and to evade the protection provided by immune cells like antibodies. According to the latest data from the public genome database GISAID, 38% of genetically sequenced samples from India collected in March contain the two mutations—scientists have labelled this the B.1.617 variant.

“It’s taken us by surprise,” says Dr. Ravindra Gupta, professor of clinical microbiology at the University of Cambridge who has studied the SARS-CoV-2 virus and its variants, including the one emerging from the UK, B.1.1.7. that appears to spread more easily among people, and is now the dominant strain of virus causing new infections in the U.K. and the U.S. “The steep, rapid increase in cases is really quite startling. It’s probably the result of relaxed social distancing, a lot of social gatherings including religious gatherings, also combined with new variants.”

Sumit Chanda, director of the immunity and pathogens program at Sanford Burnham Prebys Medical Discovery Institute in San Diego, Calif., describes the situation in India as a sort of perfect storm. “People became complacent, and politicians were declaring victory over the virus—a mission accomplished mentality,” he says. “They decided to have one of the biggest religious ceremonies and mass gatherings of humans in the world—I saw pictures and no one was masked, and it was happening in highly dense population centers. Then you have the emergence of a variant and that’s what is really driving what is happening over there.”

Chanda says it’s likely that the mutations evolved from the excessive replication that’s occurring among the burgeoning infections in India. With every new person the virus infects, it has a new opportunity to frantically copy its genome. And in its rush to duplicate its genome, the virus makes mistakes—repeatedly—and those mistakes sometimes end up making the virus fitter and stronger. Those “mistake” versions become variants that start to outcompete and dominate other, less fit viruses.

For the people the virus infects, that could also mean a viral variant that causes more severe, and even deadly disease.

Following India’s first wave of COVID-19 in the spring of 2020, health officials locked down the country, but it turned out that people who were infected didn’t get that sick; in fact, the case fatality rate was low. That led to a proportion of the population developing some level of natural immunity to the virus. But that proportion wasn’t enough to provide anything close to herd immunity, so when social restrictions were lifted in May 2020 and people began congregating again, it created the perfect conditions for the virus to mutate. “Once you let your guard down, these variants basically have more field to play on,” says Chanda. “When you have unmitigated spread, then that’s more fuel you give to the virus to make these mistakes, and the stronger viruses will pop out.”

Chanda, Gupta and others are also investigating whether another phenomenon might be at work driving the severe disease in India. It’s possible that people previously infected with SARS-CoV-2, but who did not have a severe case of COVID-19, might get even sicker if they are reinfected—a dynamic seen with some other disease-causing viruses, like dengue.

Researchers refer to this phenomenon—in which people are infected and only partially successful in fighting the virus so they continue to harbor the infection for months rather than days—as “suboptimal protection.” In one such patient, who was infected for about four months, Gupta documented the steady changes the virus made as it mutated to become better and better at evading any immune responses directed against it. “Some people can’t clear the virus—they get infected and they can’t get rid of it—so they have some immunity to the virus but the virus learns to live with their immune system, and makes mutations to adapt. And those same mutations adapt again when they infect someone else.”

It’s not clear if this is happening in India, but it could explain why so many people are getting sick so quickly. In any case, from a public health perspective, it makes sense to assume this is what’s going on—the response should be to urge people to take preventive actions like wearing masks and social distancing even if they have been infected in the past, which would be beneficial during an epidemic whether or not the virus is spreading among the previously infected. “We should be planning for the worst case scenario and assume people are being reinfected. There’s not much lost by over-calling it, since the rate of infection is already so high,” says Gupta.

As countries including the U.K. and U.S. start to send supplies and aid, India’s experience should serve as a warning for the world. The Indian variant has already been reported in the U.K. and Japan, and samples from the U.S. also appear to contain the variant’s genetic fingerprint, so building up immunity quickly through mass vaccination is more critical than ever.

“India is a cautionary tale that if we open up bars willy nilly, this could happen to us,” says Chanda. “We are at the point now [in the U.S.] where we have suboptimal immunity because people are still being vaccinated.” That is, this is exactly the time that the virus has enough room to maneuver, and genetically adapt to evade vaccines. The key to preventing that from happening? Get more people vaccinated. 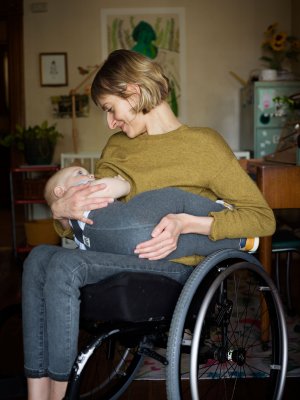 My Pandemic Baby Is Willing Us Outside
Next Up: Editor's Pick