Hong Kong Is Testing Out a Vaccine Passport for Bars. Will It Boost Lackluster Vaccination Rates?

Food and Environmental Hygiene Department officers and police leave after inspecting the license of a restaurant and bar after it reopened, in Lan Kwai Fong, a popular drinking area in Hong Kong on April 29, 2021.
Anthony Wallace—AFP/Getty Images
By AMY GUNIA / HONG KONG

Linq, which bills itself as an LGBTQ-friendly bar in Hong Kong’s Central district, roared back to life this weekend—more than 5 months after closing due to COVID-19 restrictions. While revelers, some of them shirtless, danced to Dua Lupa inside on Friday night, bar staff outside struggled to make sure everyone was complying with the government’s new regulations that allowed Linq to open its doors.

Would-be patrons, hoping to get in, fumbled through technical difficulties as they downloaded the required government contact-tracing app to their phones and dug through their wallets to find proof that they’d been vaccinated. Others attempted to evade the checks. Some gave up and drank on the street outside, mingling with friends returning from the bar with handfuls of cocktails.

A.J. Verma, who is fully vaccinated, told TIME on Friday it felt a bit weird to be back in a bar while so much of the world still struggles with the COVID-19 pandemic. But, he couldn’t contain his excitement about Linq being opened again—he’d already been given a warning about hanging from a light fixture above the bar to dance. “We have to slowly get back to normal,” he says.

Bars and nightclubs across Hong Kong were allowed to resume business on April 29 as part of new rules that relaxed pandemic restrictions across the city. Among the regulations is a “vaccine bubble“—in which food and beverage establishments are allowed to host large groups and stay open until 2 a.m. for the first time in months, as long as all staff and customers can provide proof they have received at least one dose of a COVID-19 vaccine and use the government’s contact-tracing app.

Earlier in the week, the government also announced a quarantine-free “travel bubble” with Singapore—the first opportunity for most residents to leave the city and come back freely in more than a year—but only for those who have been fully vaccinated.

The moves are part of the semi-autonomous Chinese territory’s bid to boost sluggish vaccination rates—which is about 15% of the city’s 7.5 million residents receiving at least one dose two months into the vaccine drive. That figure is among the highest in Asia, but lackluster considering vaccination is free and open to all residents over age 16.

Experts say Hong Kong’s vaccine passport experiment could offer clues for other governments that are considering rolling out their own set of expanded privileges for people who have gotten COVID-19 shots.

A complex set of rules

But, restaurant and bar owners say the new rules are frustratingly complex. Different sets of social distancing rules, labeled A through D, allow diners to sit in varying group sizes and stay until different times, depending on the vaccination status of the restaurant’s staff and guests, and whether the guests are using the city’s contact tracing app. They also allow for a raft of loopholes and work-arounds—including a combination of both vaccinated and unvaccinated patrons in some circumstances.

At The Old Man, an Ernest Hemingway-inspired cocktail bar, supervisor John Martin Aexel III says that he worries about alienating customers. “I’m not sure how we’re going to cope with it,” he says, over a Soldier’s Home #1925, a rum-based cocktail adorned with a mini alcohol-infused apple.

One provision of the rules requires anyone dining out after 10 p.m. to use the contact-tracing app—which has been met with privacy worries and skepticism by some Hong Kong residents.

“I’m gonna have to be put in a position where I’m gonna have to tell people to leave after 10 p.m. even though we don’t close until 12 a.m., because some people don’t want to use the [app],” Aexel says.

Food and Environmental Hygiene Department officers and police walk past restaurants and bars after they reopened, in Lan Kwai Fong, a popular drinking area in Hong Kong on April 29, 2021.
Anthony Wallace—AFP/Getty Images

Many bars in the city had already outmaneuvered social distancing restrictions in a bid to survive. One gay bar, where on a normal night before the pandemic drag queens could be found lip-synching Ariana Grande medleys to a tightly-packed dance floor, reopened as a restaurant, serving food like nachos and mozzarella sticks. Others have operated illegally (one bar manager was jailed for allowing a 64-person birthday party). Another bar started serving takeout food and encouraging customers to drink on the street outside (consuming alcohol in public is legal in Hong Kong).

Health experts say these factors, combined with low trust in the Hong Kong government, could blunt the intended effects of convincing more people to get COVID-19 vaccines and allowing life to safely return to normal.

“It’s really, really complicated,” Zach Mazhar, who works at a bar and restaurant on a sticky street in the semi-notorious nightlife district Lan Kwai Fong, tells TIME over thumping music. “It’s going to be hard for us to manage.”

Why vaccine passports are controversial

Vaccine passports, regulations that require proof of COVID-19 immunization for some activities, have been controversial since they were first proposed as a way to safely kickstart economic activity.

Critics often cite privacy concerns and worries about government overreach. In the U.S., several states—including Arizona, Utah, Texas and Florida—have banned or restricted businesses and local governments from requiring people to disclose their vaccination status. “Vaccination is up to each individual, not the government,” Arizona Gov. Doug Ducey said in an April 19 press release. But New York rolled out a vaccine passport, becoming the first state to do so; its Excelsior Pass app can be used for access to places like Madison Square Garden.

Although a petition against the idea gathered more than 300,000 signatures, the U.K. has plans to test a COVID-19 passport program that would allow large crowds to return to theaters, nightclubs and stadiums—if people show proof of vaccination or of having recovered from COVID-19. Denmark and Israel have both rolled out similar programs.

The E.U. is expected to introduce its own vaccine passport program called a Digital Green Certificate, and South Korea announced it will exempt full-vaccinated people from the two-week mandatory quarantine for residents who return from overseas.

Ben Cowling, an infectious disease epidemiologist at the University of Hong Kong (HKU), says that, in general, vaccine passports aren’t desirable in the long-term, as they can drive inequity and discrimination for people who can’t recieve vaccines for medical reasons or might not otherwise have access to them. But in the short term, they might make sense in a place like Hong Kong where shots are currently widely available.

Read More: Why the COVID-19 Variants Spreading in India Are a Global Concern

A lukewarm response to COVID-19 vaccines

As countries around the world rush to vaccinate their citizens, the financial hub Hong Kong is facing a problem few places have: a large supply of vaccines, and an ambivalent population.

Hong Kong residents can choose to receive the BioNTech vaccine or China’s Sinovac. But only about 15,000-20,000 people a day are showing up to get their first dose. The government’s vaccine booking website shows many available appointments in the coming days. Local media reported in early April that health experts warned that it might take more than a year to reach herd immunity. But that might not be possible on any timeline; in a YouGov poll of Hongkongers last summer, only about 40% said that they will take a COVID-19 vaccine.

The reasons for this are complex. Many feel don’t feel that they need a vaccine to protect them from the virus. Hong Kong has kept the pandemic in check with a combination of strict border controls, social distancing measures, contact tracing and widespread testing. Mask-wearing is ubiquitous. Since the pandemic began, around 12,000 cases have been recorded in the former British colony, but only about 200 people have died—rates that are a small fraction of those in the U.S. or Europe.

Plastic barriers stand on tables to enforce social distancing measures due to the coronavirus at a restaurant in Hong Kong on March 28, 2020.
Justin Chin—Bloomberg/Getty Images

In addition to launching a vaccine passport, the Hong Kong government is taking more coercive actions to boost vaccination rates. Officials announced that the city’s 370,000 foreign domestic workers—who are mostly from the Philippines and Indonesia—would be required to be tested regularly for COVID-19 unless they were vaccinated. Vaccination would also be required for visa renewal. The news sparked criticism, including from Philippines’ foreign affairs secretary Teodoro Locsin Jr., who said on Twitter that the plan, “smacks of discrimination.”

For many, the new regulations won’t profoundly change the way they’re living. Gyms have already reopened and the size of gatherings in private spaces hasn’t been restricted since the pandemic began. Despite group size limits at restaurants, larger groups are often seated together with sheets of plexiglass between them—which are, in theory, meant to block contact and reduce disease transmission, but in practice are small enough that people are able to talk around them.

Will it convince people to get vaccinated?

Hongkongers interviewed by TIME at a vaccination center were either not aware of the new incentives, or said they were not the reason they had gotten vaccinated.

But the new rules have prompted at least some people to get a jab. Ming, a 23-year-old Hongkonger, tells TIME he was on the fence about getting the vaccine. “My family was telling me your face can’t even move after the vaccine,” he says, referring to a rare and temporary side-effect of the BioNTech jab. But knowing that his vaccinated friends would be able to go to bars this weekend convinced him to book his first dose for Friday. “I don’t want to party at 7-Eleven when all my friends can party at the bars,” he says, referring to the practice of buying beer from a convenience store and drinking on the street.

Some say that no incentives will convince them to get a jab. Ron Poon, 29, tells TIME that he has safety concerns over the vaccines, and he wants the government to provide more data about their long-term effects. “I haven’t travelled in two years, it’s become a habit,” he says. “I won’t put my health at risk.”

But others are happy to be returning to some of their pre-pandemic activities. “I’m happy and comfortable to go out and be in a space that has other vaccinated people,” says Verma, who attended Linq’s “Cherry Pop” pop music night on Friday. “This place is my church.” 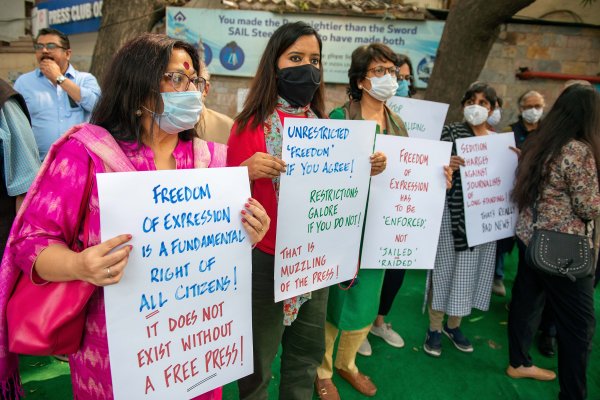 India Cracks Down on Free Speech As COVID-19 Crisis Mounts
Next Up: Editor's Pick