U.S. Sends Vaccine Supplies to Help India Fight Its Devastating COVID-19 Surge – but No Vaccines Yet

A COVID-19 vaccination center in Mumbai, India, is closed due to a shortage of vaccine on April 19, 2021 as India experiences the largest surge of the disease in the world.
Satish Bate–Hindustan Times/Getty Images
By Tony Czuczka / Bloomberg

The U.S. will send India raw materials for vaccines and step up financing aid for Covid-19 shot production, joining European countries in pledging to help stem the world’s biggest surge in cases.

“Just as India sent assistance to the United States as our hospitals were strained early in the pandemic, we are determined to help India in its time of need,” President Joe Biden tweeted on Sunday.

Material needed to produce Covishield, the Oxford-AstraZeneca vaccine made in India, has been identified and “will immediately be made available,” Emily Horne, a spokesperson for U.S. National Security Adviser Jake Sullivan, said in a statement.

Sullivan spoke by phone Sunday with his Indian counterpart Ajit Doval, according to the statement, and the pair agreed to stay in close touch.

Additionally, the U.S. Development Finance Corporation will fund an expansion of production capability by Indian vaccine maker Biological E Ltd., or BioE, to at least 1 billion doses by the end of 2022. Ventilators, therapeutics, rapid-test kits and personal protective equipment will be sent as well, according to the statement.

The U.K., France and Germany also pledged aid for India, which has reported some 1 million new cases over the last three days and 2,767 deaths in the latest 24-hour period. The outbreak is increasingly closing the rest of the world to travelers from India and threatening the country’s economic recovery.

India is administering an average of about 2.6 million doses per day, according to the Bloomberg Vaccine Tracker. At that pace, it’ll take an estimated two years to cover 75% of its population.

“I think that’s going to be something that is up for active consideration,” Anthony Fauci, head of the National Institute of Allergy and Infectious Diseases, said Sunday on ABC’s “This Week,” while cautioning that he didn’t “want to be speaking for policy right now.”

The U.S. stockpile of AstraZeneca shots reached more than 20 million doses earlier this month and has grown since then, prompting persistent calls by doctors and others to donate the shots to other countries that are way behind the U.S. in their vaccination efforts. That’s gained urgency with India’s worsening crisis.

AstraZeneca hasn’t requested regulatory approval for its two-dose vaccine in the U.S., which has three other authorized vaccines to deploy. Biden by March had ordered almost enough Covid-19 vaccines to fully inoculate every American adult twice.

The U.K., which has seen Covid cases dwindle, is sending nine airline containers of supplies, including oxygen concentrators and ventilators from surplus stocks, that will begin arriving in New Delhi on Tuesday, the Foreign Office in London said in a statement.

Prime Minister Boris Johnson said the U.K. “will continue to work closely with the Indian government during this difficult time,” according to the statement. 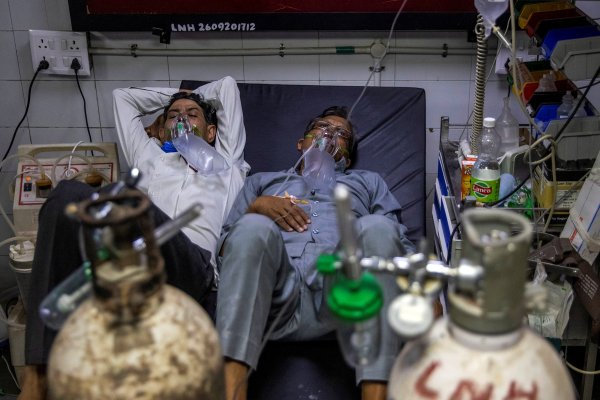