The People of Myanmar Have Rejected the Generals. ASEAN and the World Must Do so as Well

A poster showing de-facto leader of Myanmar's military government, General Min Aung Hlaing, is torn in half on railings outside the country's embassy, on 8th April 2021, in London, England.
Richard Baker / In Pictures via Getty Images
Ideas
By Alex Aung Khant
Alex Aung Khant is a youth activist from Myanmar, a member of the National League for Democracy, and the grand-nephew of Aung San Suu Kyi. In 2019, at age 25, he became the youngest candidate in local elections in Yangon and the first to publicly release his campaign expenditures online.

Myanmar’s political turmoil started much earlier than the coup d’ état that took place on Feb. 1. For the past ten years, the military has put on a grand show of relinquishing its power, and certainly appeared to do so when Aung San Suu Kyi and the National League for Democracy (NLD) won elections five years ago. But all of that was merely superficial, as the military-drafted Constitution of 2008 reserved a quarter of parliamentary seats for military officers, and gave the generals control of three key ministries—Defense, Border Affairs and Home Affairs.

As early as September 2015, junta leader Senior General Min Aung Hlaing stated that there were no plans for a military takeover. Now it is an entirely different story. Nearly 750 civilians are said to have been killed, with more than 3,500 activists, politicians, journalists, young protestors and even doctors arrested, and another 1,000 in hiding with warrants issued for their arrest—all in just 80 days.

Read more: Why I Believe Myanmar’s Protesters Will Succeed

Sadly, this is not the first time that Myanmar has seen its democratic transition undercut by military oppression and violence. This time around, however, the people are no longer waiting on their detained political leaders and are no longer tolerating a return to dictatorship.

A massive wave of ordinary citizens, especially young people, has risen to the challenge and participated in one of the most remarkable resistance movements ever seen. The Civil Disobedience Movement (CDM) is proof of democracy’s foothold in Myanmar and proof of the progressive thinking of a younger generation of activists and political leaders. Their sacrifices amid blatant atrocities are very much deserving of the recent Nobel Peace Prize nomination. Under the banner of the “Spring Revolution”, the democratic resistance has also consolidated a new national unity movement through a common enemy, overcoming previous ethnic, religious and class differences.

Members of the Korean Civil Society Association, which supports Myanmar democracy, hold an emergency press conference in front of the Indonesian Embassy in Korea and condemn the attendance of the Southeast Asian Nations Association (ASEAN) summit of the chief commander of Myanmar's military regime, Min Aung Hlaing, on April 22, 2021 in Seoul, South Korea
Chris Jung/NurPhoto via Getty Images

A handful of elected members of the Pyidaungsu Hluttaw (Myanmar’s legislature)—the majority from the NLD—has attempted to provide institutional leadership to the movement by forming the Committee Representing the Pyidaungsu Hluttaw (CRPH). The CRPH is overwhelmingly seen by the Myanmar population, and by supporters in the international community, as the effective government in exile. Its members have now formed an interim National Unity Government (NUG) and are making laws against the military regime. In a leap towards a federal democracy, the CRPH has removed all ethnic armed organizations from the list of unlawful organizations and instead designated the Myanmar military as a terrorist organization. The creation of a federal army, consisting of an armed coalition of ethnic armies, has meanwhile seen large support.

Despite the long history of failed promises to Myanmar’s ethnic groups, it seems that the CRPH’s political vision and overtures have been able to win their trust this time. Most ethnic parties and ethnic armed organizations now seem ready to set aside their differences and cooperate towards the goal of a united and federal Myanmar.

Read more: How Myanmar’s Protests Are Giving a Voice to its LGBTQ+ People

Since the coup, the junta has proven incapable of controlling the country or asserting its legitimacy, and its continued acts of violence are self-defeating, highlighting its lack of success. On Apr. 21, the junta announced that Senior General Min Aung Hlaing, would attend the special Association of Southeast Asian Nations (ASEAN) summit, being held to discuss the crisis in Myanmar. The meeting, in the Indonesian capital of Jakarta on Apr. 24, represents his first foray abroad since the coup, and looks set to be a diplomatic offensive to shore up regional support. But while a litany of denouncements of the coup by world powers has been made, it remains imperative that the international community continues to put words to action by refusing official recognition to the generals, and preventing any official representation of Myanmar by them.

For a country just ten years into its democratic transition, Myanmar has, undoubtedly, a long list of hurdles and shortcomings to overcome. But as internal efforts come together, we are already seeing signs that freedom and democracy will prevail, and that Myanmar truly has a chance of fulfilling its potential in ways we had all hoped it would. It is now up to the international community to help ensure that it does. 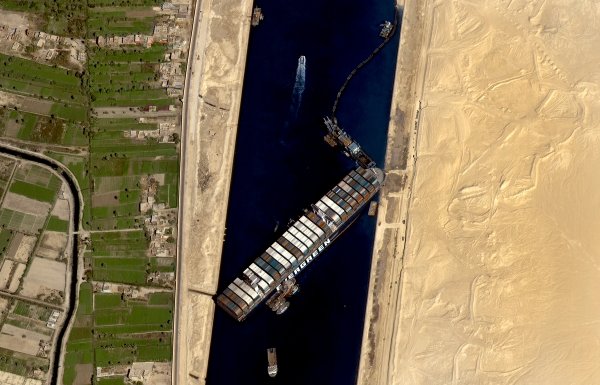 Why the Suez Canal Blockage Should Worry Us About the Future
Next Up: Editor's Pick