As a jury’s guilty verdicts were handed down on Tuesday to former Minneapolis police officer Derek Chauvin, on trial for the murder of George Floyd, people across America found a moment to exhale. Houston-based artist Ange Hillz, meanwhile, went to work: in 24 hours, he created this week’s TIME cover portrait of Floyd, to accompany a story from TIME’s Janell Ross.

“My choice was to use a lot of color to represent all of the colors of people who supported this outcome… all of the diversity” Hillz tells TIME. “I was so happy for the family, the world was happy.“

But in a testament to how tenuous this moment of joy and resolution is, Hillz delivered the final artwork from an airport in Minneapolis while en route to the funeral of Daunte Wright, another unarmed Black man recently killed by a police officer (and whose death occurred while Chauvin’s trial was in session). “The work continues, we’re not going to stop” said Hillz, well aware of what remains to be done to dismantle structural inequality and systemic racism in the U.S.

Read more: ‘Still So Much Work To Be Done.’ Buoyed by Chauvin Trial Results, the Police Reform Movement Looks Ahead

Hillz has built a lasting relationship with the Floyd family over the past year, having first met them when he created a speed painting of Floyd at the family’s private funeral in Houston last June. Since that day, Hillz says he has communicated with family members regularly.

It is a revolutionary act to create such a likeness of a Black man like George Floyd, who would only normally be visible if he were a celebrity—or a perceived menace. And it is radical to render him as he was: a father, a son and a brother; an ordinary man who, in death, has attained near-iconographic status. The image exists as a tribute to Floyd’s humanity, and this tenuous American moment of possibility.

“All we need is equality,” says Hillz. “Nothing more, nothing less.” 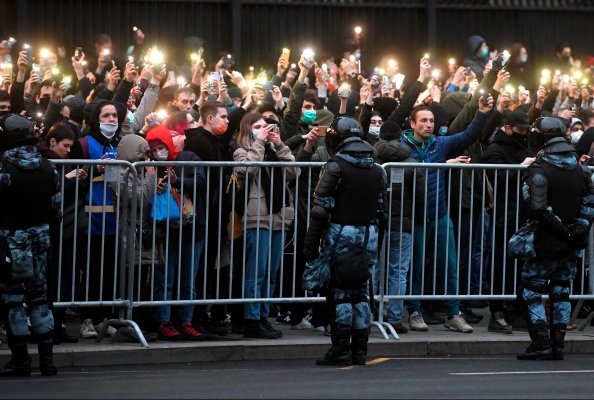 Russia Is Murdering Alexei Navalny in Plain Sight
Next Up: Editor's Pick