Sian Proctor may owe her life to Apollo 11—literally. Born in Guam—the daughter of an engineer who worked at the local tracking station that helped NASA maintain communications with its lunar crews—she was the fourth child of a couple that she suspects did not plan for so many kids, and came into the world just nine months after Apollo 11 stuck its historic first moon landing.

“I think I was a celebration baby,” she says with a laugh. “I wouldn’t be here if it wasn’t for human space flight.”

Proctor herself has a lot to celebrate this year. Come September, if all goes to plan, the 51-year-old professor of geoscience at South Mountain Community College in Phoenix will climb aboard a SpaceX Crew Dragon spacecraft and rocket into low-Earth orbit, spending up to three days aloft before splashing down in the Atlantic Ocean. The mission, dubbed Inspiration4, won’t be the first aboard a SpaceX ship to carry crew; it won’t even be the second or the third. What it will be is the first flight aboard any spacecraft flown by any country or company to be crewed entirely by non-astronauts—four people who until this past February did not know they would be flying to space at all, and now will go to a place that fewer than 600 people in the world have ever gone before. “I thought a flight like this was a decade away,” says Proctor. “But it’s now.”

From the beginning, the American astronaut club was exceedingly undemocratic. NASA would periodically throw its doors open to new entrants, and you were more than welcome to apply—provided you were a military pilot or an engineer or a biologist or a physicist, of a certain age and a certain fitness and a certain temperament, and prepared to go through exhaustive training over the course of years before your turn finally came to fly. Chances were it never would come, because chances were you wouldn’t be selected for training in the first place. It was a fine system—one that gave us our Armstrongs and Aldrins and Grissoms and Glenns—but it was a decidedly exclusive one, too.

Early this year, Jared Isaacman decided it was time to shake things up—and he was in a position to make it happen. Isaacman, the 37-year-old billionaire founder of online payment processing provider Shift4 payments, is a private pilot who always had a hankering to go to space. Will and wallet are not enough to secure yourself a seat aboard a NASA spacecraft, but SpaceX is a different matter—a private company under government contract to fly cargo and crew to the International Space Station, but free to sell flight tickets to anyone it wants to in its spare time. Isaacman approached the company in January and bought four seats for an undisclosed sum.

One slot—the commander’s slot—would be his. The question was how to select the three other people he ultimately chose to fly with him, all of whom TIME visited with this week at Cape Canaveral. Part of the answer, Isaacman decided, would be philanthropy. Long a supporter of multiple childhood charities (including the Make-a-Wish Foundation), Isaacman turned his attention this time to the St. Jude Children’s Research Hospital in Memphis, Tenn. He paid more than $5 million for a 30-second ad during last February’s Super Bowl to announce the Inspiration4 mission and raise funds for the hospital. The ad attracted $13 million in donations, and Isaacman added his own $100 million. For his first crew member, he chose Hayley Arceneaux, 29, a physician’s assistant at St. Jude and a survivor of childhood bone cancer. Arceneaux will be the youngest American to fly in space and the first of any country to go aloft with a prosthetic body part: a metal rod in place of the portion of her right femur she lost to her disease.

“I’m a little concerned about traveling with it, with all those g-forces on it,” Arceneaux admits. “But I want other people with other prostheses to fly and somebody has to go first.”

One of the remaining two seats was allocated through a competition in which entrants designed an online store using Shift4 Payment’s software and shared their entrepreneurial and space aspirations via social media. The other went to the winner of a random drawing among contestants who made a donation to St. Jude. Proctor won the seat determined by designing the online business. The fact that she was chosen at all represented a sweet bit of redemption: She applied to NASA for selection as an astronaut twice before, and in 2009 made it as far the final 47 out of 3,500 applicants before being cut.

“At least one of the people chosen in that class has not even had a chance to fly yet,” says Proctor. “I may actually be going to space before I would have gone if I’d been selected by NASA.”

The final winner was Chris Sembroski, 41, an Iraq war veteran and engineer at Lockheed Martin in Seattle. Sembroski was actually not the person originally chosen—a close friend of his won the drawing and got the call from Isaacman first, but chose not to go for personal reasons. He recommended Sembroski fly in his place, and Isaacman agreed.

“Jared called and told me that my friend had won, and then he said, ‘but he’s elected to pass this up and is passing it on to you. Congratulations, you’re part of Inspiration4,'” Sembroski recalls.

The new crew is being fast-tracked to space. Never mind the multiple years NASA astronauts spend training for a mission, the Inspiration4 team will get no more than six months. Some of their work—fitness tests with University of California, Los Angeles doctors working with SpaceX; centrifuge runs at the NASTAR aerospace center in Bensalem, Pa.; long hours spent in Crew Dragon simulators—is the stuff of any astronaut training. Other parts—like camping with Isaacman for three days on the flank of Mt. Rainier next week—is particular to this mission.

“I want everyone to know what it’s like to be very, very uncomfortable and to push themselves anyway,” Isaacman says. “It helps build confidence when other challenges come up.”

The flight itself will bear Isaacman’s mark too. At his request, the spacecraft will be flying at an altitude of 540 km (335 mi), higher than the 410 km at which the space station orbits. “We want to go past the altitude we’ve grown comfortable with,” Isaacman says. “We want to say ‘Let’s stretch ourselves.'” Since the Crew Dragon will not be going to the station, SpaceX is removing its docking collar and replacing it with a domed window—the better to take advantage of that more rarefied view.

The crew will be doing more than sightseeing in their three days aloft. There will be science experiments to run and maintenance chores to perform, and Proctor plans to teach a college lesson from space. Then, too, there will be history to make. The physics of space travel—the blistering speeds and the heavy g-loads and the huge, explosive machines necessary to make the trips—will perhaps never make rocket flights beyond the atmosphere as routine as airplane flights through it. But space travel can at least become more routine, more egalitarian—a pursuit not just for humanity’s elite, but for some of the rest of us. Inspiration4 is an extraordinary mission—with the paradoxical goal of making space flight a more ordinary thing.

Correction: The original version of this story misstated where Sian Proctor teaches. It is South Mountain Community College, not South Mountain University. 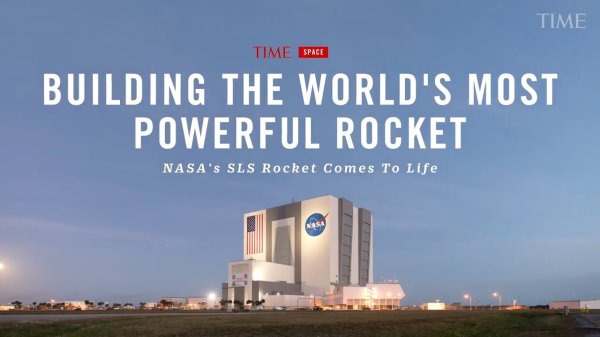 Exclusive: NASA's Most Powerful Rocket Under Construction
Next Up: Editor's Pick