President Joe Biden and Vice President Kamala Harris praised the guilty verdict of former Minneapolis police officer Derek Chauvin for murdering George Floyd, but cautioned that the fight for racial justice in the United States is nowhere near complete.

“This can be a giant step forward in the march toward justice in America,” Biden said in remarks Tuesday evening at the White House. But he emphasized that a verdict of this nature is “much too rare.” “In order to deliver real change and reform, we can and we must do more to reduce the likelihood that a tragedy like this will ever occur again,” he said.

The remarks, which came roughly two hours after a jury convicted Chauvin on three counts for murdering Floyd in May 2020, reflect Biden and Harris’ commitment to reckoning with racial inequities, which they have made a centerpiece of their Administration. But they also acknowledged the challenges they face in making a dent in this systemic problem that has plagued the country for centuries. “A measure of justice is not the same as equal justice,” Harris said. “This verdict brings us a step closer, but the fact is we still have work to do.”

But as Biden and Harris look to turn this rhetoric into action, they will encounter obstacles. On Tuesday they both lamented that Congress had yet to pass The George Floyd Justice in Policing Act— the police reform bill that passed the House in twice, once in 2020 and again earlier this year— but is languishing in the Senate, where it requires sixty votes to get passed. The bill includes provisions that would establish a national standard to operate police departments, require law enforcement to collect data on police encounters, and puts a federal ban on chokeholds.

“It shouldn’t take a whole year to get this done,” Biden said of the bill. He said he told the Floyd family in his conversation with them after the verdict that he was going to continue to push for police reform to get passed as quickly as possible so he could sign it into law.

But it is unclear if Congress will take action, even as some members are hopeful. Rep. Karen Bass, a Democrat from California who led the effort to pass the bill in the House, told reporters Tuesday before the verdict that she had been speaking with Sen. Tim Scott of South Carolina, who is leading Republicans on this issue, and she was “very optimistic that we’ll get it on President Biden’s desk.” But there’s reason for doubt. Last year in the wake of Floyd’s murder, both Republicans and Democrats expressed a desire to work together on the issue of police reform, only to see the efforts fall by the wayside.

The 9-minute and 29-second video of Chauvin kneeling on Floyd’s neck— as Floyd says more than two dozen times that he cannot breathe— sparked the country’s strongest reckoning with racism in recent memory, and protests gripped the nation last summer. When Biden took office in January, systemic racism was one of the core problems he pledged to address, along with the coronavirus pandemic, the struggling economy, and climate change.

Biden did not weigh in publicly on Chauvin’s trial until the jury was sequestered. At that point, according to the White House, the President called Floyd’s family to tell them they were in his prayers and see how they were doing. On Tuesday, Biden said he was praying for the “right verdict” and watched the decision with Harris and their staff in the private dining room. After watching the verdict, he and Harris, along with First Lady Jill Biden, went into the Oval Office and spoke with Philonise Floyd, George’s brother. Audio posted on Twitter by Benjamin Crump, the attorney for the Floyd family, shows Biden calling the family incredible, and telling them, “Nothing is going to make it all better. But at least, God, now there is justice.” 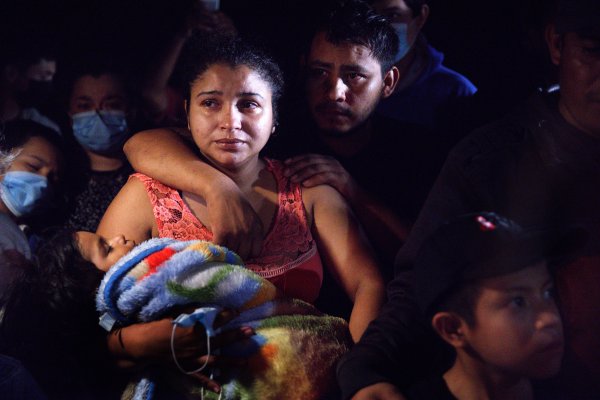 Why Letting in More Refugees Could Work for Biden
Next Up: Editor's Pick