People hug in the parking lot after a shooting at Westroads Mall in Omaha, Nebraska, on April 17, 2021.
Chris Machian—Omaha World-Herald/AP
By Associated Press

OMAHA, Neb. — A murder warrant has been issued for a teenage boy suspected in a shooting at a Nebraska mall that left one man dead and a woman injured, police said Sunday.

Police did not describe the relationship between the two young men.

Police said a third man has been identified as a person of interest in the shooting, but did not release his name.

Terrified shoppers fled for cover as shots rang out around midday near a J.C. Penney store at the mall.

Police said 21-year-old Trequez Swift was shot and died at an Omaha hospital. A woman, 22-year-old Ja’Keya Veland, was wounded in her leg, but her injuries are not considered life-threatening.

Authorities have not described the circumstances leading up to the shooting, but said it was an isolated incident and not a random attack.

Last month, Omaha Police Officer Jeffrey Wittstruck was shot at four times by a 21-year-old man who was accused of shoplifting T-shirts from J.C. Penney at Westroads. Wittstruck survived.

In 2007, a gunman killed eight people and himself inside the Von Maur department store at Westroads. 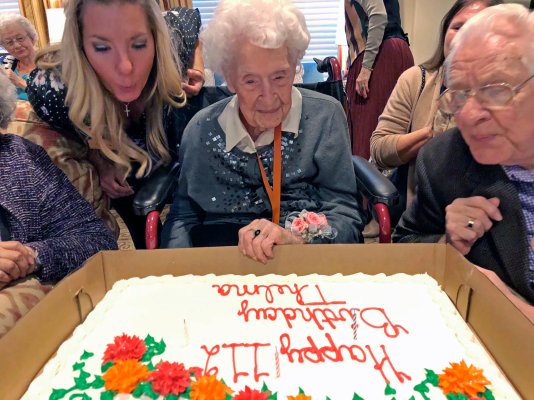 Oldest American, 114, Wants to Eat With Friend
Next Up: Editor's Pick