Chelsea Handler: Marijuana Criminalization Has Always Hurt People of Color the Most. The Time for Reform Is Now

On his final day in office Donald Trump, who I never agreed with, did something I completely agree with: he commuted the sentence of a man who was serving a life sentence for possessing marijuana.

Ferrell Scott had been in prison in Texas since 2008 for marijuana possession and intent to distribute, and because of prison sentencing guidelines, he was sentenced to life in prison.

That’s worth repeating: Life in prison without parole for a nonviolent marijuana conviction.

There are so many things wrong with this story that it’s nearly impossible to know where to start, so let’s get started. To understand America’s cruel and irrational cannabis laws, one needs to look at its incredibly ugly history.

For as long as the U.S. has had laws about marijuana, they have served to disproportionately punish people of color. The very use of the “marijuana” – as opposed to the Anglo word “cannabis” – was reportedly a deliberate choice to whip the white masses into an anti-Mexican and anti-immigrant fervor during the Depression era. After the complete failure and repeal of alcohol prohibition in 1933, America’s puritanical conservatives and government agencies set their sights on drugs. The crusade against marijuana use had already begun: In the 1920s and 1930s William Randolph Hearst, the very conservative, very wealthy newspaper publisher helped start America’s descent into its destructive war on drugs by publishing a stream of stories about marijuana’s supposed evils. Reefer Madness, a propaganda film released in 1936 that vilified cannabis as a source of extreme criminal violence, was produced by a church group and successfully frightened many white Americans about cannabis.

Congress then passed the Marihuana Tax Act of 1937, which effectively made cannabis illegal, even though there was no serious cannabis problem and no public outcry for regulation. Harry Anslinger, commissioner of the Federal Bureau of Narcotics (now known as the Drug Enforcement Agency) from 1930 until 1962, started a massive – and baseless – propaganda campaign to simultaneously demonize both cannabis and its users. In Congressional testimony in 1937, Anslinger shared a letter from an editor of the Alamosa Daily Courier in Colorado that said, in part, “I wish I could show you what a small marihuana cigaret can do to one of our degenerate Spanish-speaking residents. That’s why our problem is so great; the greatest percentage of our population is composed of Spanish-speaking persons, most of who [sic] are low mentally, because of social and racial conditions.”

In 1977, President Jimmy Carter tried to inject some much-needed sanity into the discussion when he told Congress that “penalties against possession of a drug should not be more damaging to an individual than the use of the drug itself.” But the effects of the Anslinger-inspired war on marijuana and minorities are still with us today.

Twenty-seven states and the District of Columbia have decriminalized small amounts of cannabis, and an increasing number of states have legalized it. In several states, however, marijuana is still fully illegal. This piecemeal approach leaves cannabis justice at the mercy of “states rights,” the same “states rights” that has allowed Jim Crow justice to flourish in America since the end of Reconstruction in 1877. And many individuals remain incarcerated for behavior that might not be considered criminal today depending on their location. As Ferrell Scott said while behind bars, “There is a whole marijuana industry. Some people distribute marijuana to get a life savings. I distributed marijuana and got a life sentence.”

The prohibition and criminalization of cannabis stands out as one of the greatest miscarriages of justice in American history, and it demands radical reform. Last year, the Democratic-majority House passed the MORE (Marijuana Opportunity Reinvestment and Expungement) Act, but the Republican-majority Senate failed to act. Now the country has a Democratic President, House and Senate in place, and they must take action. The MORE Act would not only remove marijuana from the Schedule I of the Controlled Substances Act and eliminate criminal penalties for individuals who manufacture, distribute or possess it, the legislation would also establish a process to expunge convictions related to federal cannabis offenses. Americans should not be locked up for a recreational substance that may actually be less harmful than beer, wine and your favorite cocktail. 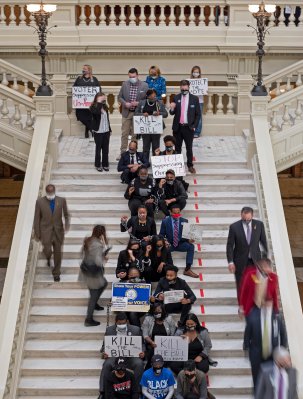