US Special Presidential Envoy for Climate John Kerry speaks to the press after a meeting with the French president at The Elysee Presidential Palace in Paris on March 10, 2021.
LUDOVIC MARIN/AFP via Getty Images
By Charlie Campbell / Shanghai

On Wednesday, Washington’s climate envoy John Kerry becomes the first senior Biden administration official to visit China—but he touches down in Shanghai at a time of high diplomatic tensions.

China and the U.S. are the world’s top two carbon polluters, accounting for 27% and 13% of global greenhouse emissions in 2019, respectively. Their close cooperation is essential if the world is to mitigate the effects of climate change, be it wildfires in California or heat and drought in Australia and melting polar ice.

The geopolitical stakes are also high. Following combustive talks between the world’s top two economies in Anchorage last month, little hope remains of recapturing the relative cordiality of the Obama years. The superpowers continue to spar on a range of issues, including human rights abuses in Tibet and Xinjiang, the erosion of political freedoms in Hong Kong, and Beijing’s increasingly aggressive posture toward Taiwan.

In fact, bilateral ties have reached such a low, following four years of Trump, that the environment is one of the few areas where trust-building appears plausible. Seeing this, Beijing has brought veteran diplomat Xie Zhenhu out of retirement especially to be Kerry’s chief interlocutor. The pair worked together successfully in the lead up to the 2015 Paris Agreement, which seeks mid-century carbon neutrality in a bid to limit global temperatures at 2˚C above pre-industrial levels.

“U.S-China cooperation on climate change has the potential to deliver great benefits for both countries and the world,” says David B. Sandalow, a fellow at Columbia University’s Center on Global Energy Policy, and a former environmental official at the White House, the State Department, and the Department of Energy. “Even at the height of the Cold War, the U.S. and Soviet Union worked together on public health and arms control issues.”

Just as bilateral talks in early 2015 built momentum toward Paris, Biden must be hoping China will play an important role a virtual Leader’s Summit on Climate on Apr. 22. The online gathering will be an opportunity for major emitters to make concrete commitments before the landmark U.N. COP Climate Summit in Scotland in November.

Read more: The U.S. and China Must Cooperate on Climate Change

“There has never been a U.S. administration that has given the climate crisis higher priority by the Biden Administration,” says Sandalow. “The summit is important to send a signal to the world that the U.S. federal government is back in the fight.”

Speaking to media before his departure, Kerry has said that the climate crisis was so important that it was “urgent” for Washington and Beijing to “compartmentalize” the issue. Differences between the two sides “will never be traded for anything that has to do with climate,” he said.

These look to be the main areas of focus during his visit.

Chinese President Xi Jinping pledged at the U.N. General Assembly in September that China would achieve peak carbon in 2030 and carbon neutrality by 2060. China’s 14th Five-Year Plan, approved in March, switched the country’s development from “high-speed” to “high-quality,” with the aim of realizing a “beautiful China” and forging an “ecological civilization.”

Read more: How China Could Change the World by Taking Meat off the Menu

But while China is by far the world’s leader in solar and wind power deployment, it still consumes more coal than the rest of the globe combined, and continues to green-light new coal projects. Coal consumption fell to a new low of 58% of primary energy production in 2019, but saw a slight revival last year as regions sought to offset the negative economic effects of the trade war and pandemic. China’s current 1040 gigawatts (GW) of coal-fired power supply—equivalent to the whole U.S. power grid—is to be supplemented by another 100 GW under construction and an additional 150 GW planned.

As such, the U.S. will be pressing China to put an exact figure on what “peak carbon” entails, since leaving the peak unquantified only encourages China’s regions to frantically build coal capacity to even higher levels in the run-up to 2030.

Greening the Belt and Road Initiative

China’s fondness for coal is reflected in Xi’s signature Belt and Road Initiative (BRI), a $1 trillion series of transcontinental trade and infrastructure projects touted as a modern version of the fabled Silk Road. Coal-fired plants feature heavily, because they are cheap for local partners and Chinese engineers can easily supply the technology. Since 2013, the BRI has committed over $50 billion in state finance to constructing 26.8 GW of coal facilities across 152 countries, reports Quartz.

“Coal is the most immediate area where international climate diplomacy could capitalize on Chinese political ambition,” says Li Shuo, a senior global policy adviser for Greenpeace in Beijing.

Greening the BRI makes economic and political sense for China, as coal-related projects are frequently targeted by protests and litigation in host countries, undermining their viability and thus the interest of Chinese investors. In Turkey, 88% of pre-approved coal projects have been cancelled since 2010; in Indonesia, 51% have been since 2015. “Increasingly banks and investors in China are paying more attention to this issue,” says Ma.

In a similar fashion, China’s record on green investment is mixed. It has become one of the world’s top backers of green energy projects, including a record-breaking solar farm in Argentine and a wind farm in the U.K., as well as a slew of initiatives across Africa. Yet China leads the world in carbon-intensive finance, too. Over 70% of all coal plants built today are reliant on Chinese funding.

The U.S. and China could also work together to reduce the carbon footprint of investments made by Chinese and international financial institutions. Already, the Beijing-based Asian Infrastructure Investment Bank (AIIB) has committed to not funding any coal projects in any of its 103 member countries. The U.S. will be pushing more Chinese banks to follow this example.

“The demand for coal will linger for a while, but we have the effective means of financing supply to help our clients smooth the transition to a low carbon and eventually a zero carbon economy,” AIIB President Jin Liqun tells TIME.

Employees work on the assembly line of Neta electric car at a factory of Hozon New Energy Automobile Co., Ltd on February 19, 2021 in Jiaxing, Zhejiang Province of China.
Cheng Jie/VCG via Getty Images

A lot of beneficial cooperation remains to be had—at least potentially. China has the largest property market in the world, for instance, making up a fifth of all construction investment globally. It is expected to plow $13 trillion into the property sector by 2030. Imagine if the U.S. and China could work together on zero carbon buildings, and building-code best practices, learned from the experience of American states like New York and California.

In turn, the U.S. has much to learn from China’s technological leadership and economies of scale in the realm of electric vehicles. More electric vehicles are sold in China each year than in the rest of the world combined, and some 98% of the world’s 500,000 electric buses are to be found on Chinese roads. Meeting Paris Agreement goals requires at least doubling the global switch to electric vehicles, making all new cars and trucks zero emission by 2040.

Read more: John Kerry Is Already Calling on China to do More on Climate Change

But it’s unlikely that these deals can be resurrected in the new atmosphere of competition that exists between the two nations. This is especially true regarding technology, which has become a key battleground given recent spats over 5G, IP theft, and aversion to Beijing’s attempts to upgrade its reach and capabilities through the Made in China 2025 and China Standards 2035 programs.

“Many of these areas are very easy political targets in the U.S. because they are perceived as helping our major competitor achieve more.” says Li. “So a lot of the previous cooperation is no longer feasible.”

Against this backdrop, Kerry’s trip to Shanghai could be tremendously important. “Such a visit is absolutely necessary,” says think-tank director Ma, “to try to pave the way for any successful meeting and multilateral process” 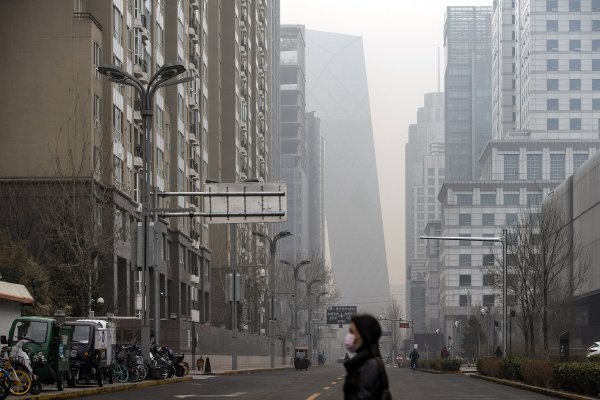 Our Digital World Can Deliver a Greener Industrial Future
Next Up: Editor's Pick