Black Women Are Fighting to Be Recognized as Long COVID Patients

It took five years of chronic pain, nausea, fuzzy thoughts and a cruel mixture of fatigue and insomnia for Wilhelmina Jenkins to be diagnosed with myalgic encephalomyelitis/chronic fatigue syndrome (ME/CFS). But even after she received that diagnosis, in 1988, she faced her fair share of doubters—not because her symptoms didn’t meet the bar for diagnosis, but because she is Black.

At that time, researchers mistakenly thought ME/CFS, a syndrome that sometimes follows a viral illness and leads to long-term pain, fatigue and other symptoms that can last decades, primarily affected upper-class white women. It was pejoratively labeled “yuppie flu,” and many doctors believed it to be psychosomatic.

Offensive and damaging for all women, that scorn was particularly harmful for patients of color, because it meant they were left out of studies and ignored by doctors and researchers. Despite symptoms so crushing she had to abandon her flourishing career in physics, Jenkins found the energy to speak out about her condition anywhere she could, from the U.S. Centers for Disease Control and Prevention (CDC)’s headquarters in her home of Atlanta to national television shows. “It was so important to have my face out there, so that people would see this is a disease African Americans got,” she says.

In part thanks to Jenkins’ advocacy, the CDC today acknowledges that ME/CFS, a disease that affects some 2.5 million people in the U.S., is “at least as common in African Americans and Hispanics as it is among whites,” but most research on the condition does not represent that diversity.

When COVID-19 hit last year, and case clusters began popping up in Black communities, Jenkins, now 71, braced herself for another fight. She knew that, since ME/CFS can follow viral illnesses, COVID-19 could be a mass trigger. She also knew that, particularly in communities of color, many patients would have no idea why they weren’t getting better after a couple weeks. “I knew they were not going to be reached,” she says.

She ended up being right on both counts. Researchers now believe at least 10% of COVID-19 patients develop long-term symptoms, including some that sound identical to those associated with ME/CFS: constant fatigue, cognitive dysfunction, chronic pain, gastrointestinal distress and more, many of which worsen after exertion. Some researchers now believe the conditions are one and the same, and some Long COVID patients who have been sick at least six months meet diagnostic criteria for ME/CFS.

The data about Long COVID prevalence, and who is likely to get it, are still coming together, but some studies have found that the condition is more common among women than men. Women of color have also caught COVID-19 at disproportionately high rates. So it’s logical to assume that many Long COVID sufferers are women of color. But, just as Jenkins feared, many patients of color had no idea what was happening to them after they got sick. Cynthia Adinig, a 35-year-old Long COVID patient from Virginia, was one.

She says she felt blindsided when she learned, months into her illness, that the medical establishment has known about ME/CFS and other post-viral conditions for decades, but said little about COVID-19’s potential to trigger them. “We were not prepared,” she says. “Why did no one warn us? Why was no one saying this” could happen?

That feeling propelled Adinig to join Jenkins and two other Black female activists—Ashanti Daniel, a 40-year-old ME/CFS patient from California, and Chimére L. Smith, a 38-year-old Long COVID patient from Maryland—in fighting for a better future for Black women who develop these syndromes. Their goal is to educate women of color about ME/CFS and Long COVID, and to secure recognition and solid science from the medical establishment. In addition to speaking about their experiences in the media, they are calling on researchers and legislators to direct research dollars toward ME/CFS, Long COVID and their effects on people of color.

Daniel doesn’t consider herself a born activist—but she received her ME/CFS diagnosis on ME Awareness Day: May 12, 2017. “If you get your official diagnosis on that day, you don’t have a choice,” she says with a laugh. “You have to participate in advocacy.”

Pre-pandemic, that meant leveraging her former career as a registered nurse to drum up awareness of ME/CFS, and the need for racially sensitive care, in the medical community. More recently, it has meant building a bridge between ME/CFS patients and the Long COVID community.

While there’s a flourishing online community of support groups for people with Long COVID, there wasn’t much discussion about possible overlap with ME/CFS at first. Patients like Daniel and Jenkins took it upon themselves to change that, reaching out to Long COVID patients posting about hallmark ME/CFS symptoms and offering strategies that have helped them live with their own. (One big one? Ignoring frequent medical advice to exercise and “push through” the exhaustion, which often makes symptoms worse.) “I could have [avoided] a solid five or six ER trips had I had [these strategies] early on,” Adinig says.

Those ER trips did less to help her than the advice of ME/CFS patients, Adinig says. It wasn’t until she compared notes with a white friend who also has Long COVID that Adining realized how many tests and treatments she hadn’t been offered. “I had to have blood, sweat, and tears to wait nine months post-COVID to get [a presumed COVID-19 diagnosis],” Adinig says. “Even after I get a presumed COVID diagnosis, I still go and see specialists, and they’re like, ‘Oh, I don’t think anything is wrong with you.’”

Both Adinig and Smith got sick early in the pandemic, when COVID-19 testing was not easily accessible. As a result, they say, it has been an ongoing challenge to be diagnosed and treated for Long COVID. Just recently, Smith says, she was turned away from a research study because she was never officially diagnosed with COVID-19, even though her doctor now believes she has Long COVID. The rejection is frustrating to her personally, she says, but even more so because it means yet another Black woman won’t be studied.

She and her fellow advocates are fighting for more women of color to be included in research studies, so that the science on ME/CFS and Long COVID can finally reflect their patient populations—and so that women of color who do get sick will be believed. Adinig has connected numerous Black Long COVID patients with researchers, to ensure they’ll make it into studies. Smith is also lobbying Long COVID organizations to include Black doctors, researchers and politicians in their work.

“I do believe that it is my responsibility to warn other Black people, especially Black women,” Smith says. “I’m doing this so that another Black woman who comes after me will not face the same humiliation, the same degradation.”

Jenkins is also still searching for answers herself. Even after years of research—albeit without much funding—scientists still don’t know exactly why some people get sick with a virus and never return to full health. ME/CFS could be related to long-term changes in immune function or energy production, among other theories, but no one knows for sure. There’s just as little certainty around Long COVID.

“I would like one good scientific explanation of why my brain stopped working in 1983,” Jenkins says. “If someone can get that to me while I’m still on Earth, I will be very happy.” 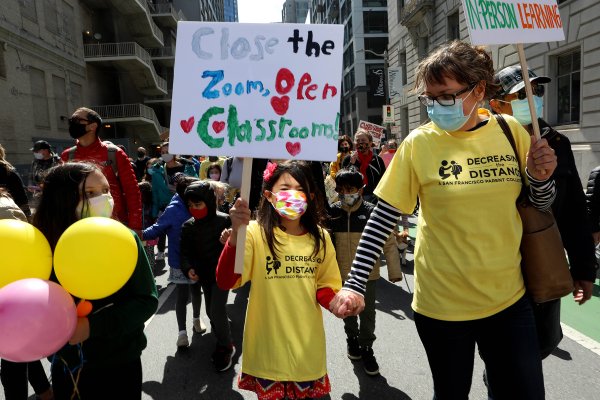 Blue States Have Failed in School Reopenings
Next Up: Editor's Pick