TV Is Having a Talking-Head Crisis, From Sharon Osbourne to Dr. Oz to Meghan McCain

On March 22, midway through a series of guest-hosted shows, Jeopardy! fans revolted. Their target was Dr. Mehmet Oz, the Oprah-approved, Ivy League-educated surgeon, author and host of The Dr. Oz Show, who was the most recent celebrity to step into the late Alex Trebek’s dress shoes. As viewers fumed on social media, Variety called Oz’s engagement a “black eye” on the show and some 600 former contestants signed an open letter arguing that he “stands in opposition to everything that Jeopardy! stands for.” Indeed, everyone from other physicians to elected officials to GLAAD has blasted Oz, over the years, for pushing weight-loss scams, giving a platform to anti-vaxxers, normalizing gay “conversion” therapy and, most recently, endorsing shoddy COVID remedies. That didn’t necessarily disqualify him from a two-week gig reading pre-written questions and making small talk. From another angle, though, the outrage made perfect sense. At a time when the idea of objective facts has been so catastrophically eroded, if you can’t trust the host of Jeopardy!, whom can you trust?

It’s not like Trebek was independently verifying the game’s every answer. Yet in his 36 years as host, as the American public grew politically polarized and the public square was increasingly polluted by mercenary hucksters and partisan spin doctors, he came to symbolize a refreshing reverence for pure, depoliticized knowledge. Now—and especially during a pandemic when TV is so many people’s main portal to the outside world—Jeopardy! feels personal because it represents a beloved but endangered aspect of a cultural conversation starved for truth, intellect and insight.

Maybe that helps to explain why we’re seeing so many controversies emerge among the talking heads who populate the traditionally tame realm of game shows and daytime chat programs. Also in March, Sharon Osbourne, a long-time panelist on CBS’s The Talk and metal first lady, exploded when co-host Sheryl Underwood pressed her about a tweet in which she defended Piers Morgan from accusations of racism. (In his own on-air meltdown, Morgan had stomped off the set of Good Morning Britain amid questions about his very public disdain for Meghan Markle.) Soon, former Talk colleagues were alleging that Osbourne had a history of making racist and homophobic comments. By the end of the month, she’d exited the show.

Meanwhile, on ABC’s The View, token conservative Meghan McCain was getting tangled in her own web of racial doublespeak. On his program Last Week Tonight, John Oliver pointed out that, months before tweeting “Stop Asian Hate” in response to the mass shooting in Atlanta, she’d announced that she didn’t have a problem with Donald Trump calling COVID-19 “the China virus.” McCain apologized. But then, as she is wont to do, McCain drifted back to sanctimony, decrying the “slippery slope” of identity politics. In its 25 years on the air, she said, The View had had only one Asian-American co-host (Lisa Ling). “Does that mean that one of us should be leaving at some point because there’s not enough representation?” McCain demanded. “Is identity politics more important than qualifications of a job?” MSNBC host Tiffany Cross responded to those rhetorical questions: “Yes. One of you should definitely lose your job. I’ll give you two guesses, but you’ll only need one.” After all, McCain—the daughter of the late Senator John McCain—was not exactly a shining example of the meritocracy herself.

What’s dispiriting here isn’t just the textbook white fragility on display; it’s also the shallowness, navel-gazing and self-promotion that suffuse the discourse itself. The Talk greets the most intense phase of a society-wide reckoning on anti-Black racism, and a talk show that’s supposed to reflect a diverse set of perspectives winds up marking that moment with Osbourne screaming “How can I be racist about anybody or anything in my life?” at her Black co-host. After a devastating wave of violence, this country may finally be ready to have a conversation about its long history of mistreating Asian Americans, and The View marks the occasion with McCain concern-trolling over identity politics. More than a year into a global health crisis that has killed millions, and there’s still room in public life—on the venerable Jeopardy!, even—for a famous physician who used his platform to hype hydroxychloroquine as a COVID treatment. (It has, in fact, been an especially bad year for TV’s most controversial celebrity doctors. A little over a month before Dr. Drew Pinsky stuck his foot in his mouth over vaccine passports, a young woman named Hannah Archuleta filed suit against the boot-camp-style teen treatment center where she was sent after appearing on Dr. Phil, alleging that she had been sexually assaulted by a staff member. The rapper Bhad Bhabie, perhaps the most famous troubled teen to appear on the latter show, soon came forward with her own account of abuse at the facility.)

It’s not that every thoughtful voice has been entirely shut out of the conversation. Scholars like Isabel Wilkerson and literary novelists like Kazuo Ishiguro are still carving out well-deserved space on bestseller lists dominated by celebrity memoirs, James Patterson thrillers and Bridgerton romances. Smart films and TV shows grounded in social criticism—Judas and the Black Messiah, Succession, Parasite—are still being made, honored and debated, although not usually with the same fervency as Joker. Crucial high-level concepts, from critical race theory to the Anthropocene, are still breaking out of the Ivory Tower. The problem is with the interlocutors who shepherd these ideas into the mainstream. How many viewers learned the word “intersectionality” when Meghan McCain denounced it, between sobs, in a much-discussed View diatribe on the alleged anti-Semitism of Rep. Ilhan Omar in 2019? Whether you embrace or reject intersectional politics (which seek to acknowledge how different aspects of people’s identities interact), it’s fair to wonder if McCain could produce a clear definition of the term.

Raoul Peck provides a concise summary of the situation, over a nightmarish montage of The View and Fox News clips in his searing new documentary series Exterminate All the Brutes: “American scholars have largely abandoned the role of public intellectuals to pundits and entertainers,” he says. “No proof, no arguments are necessary. It is opinions against opinions, shamelessly passing off impudence as reason.” We may not deserve smarter, but we need it. Desperately. 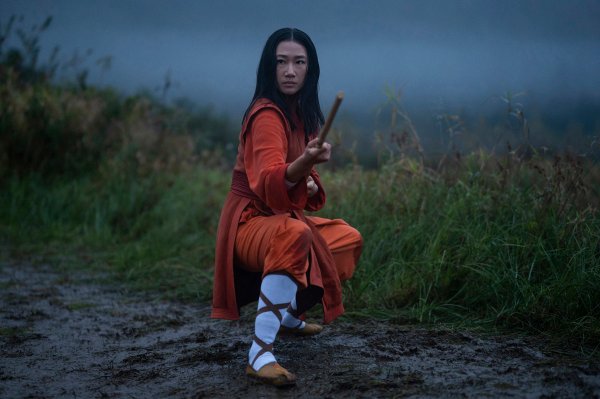 How a New Kung Fu TV Series Is Reclaiming Much More Than Just the Martial Arts
Next Up: Editor's Pick