Photo-illustration by Lon Tweeten for TIME; Getty images
Ideas
By Tom Wheeler
Tom Wheeler was chairman of the Federal Communications Commission from 2013 to 2017. He is currently a senior fellow at Harvard Kennedy School Shorenstein Center and a visiting fellow at the Brookings Institution.

Facebook founder and CEO Mark Zuckerberg is telling everyone who will listen that it is time to regulate the internet. But do Facebook and other platform companies support meaningful oversight or simply a regulatory Potemkin Village?

Zuckerberg’s efforts began with a 2019 op-ed in the Washington Post, “The Internet needs new rules.” The article proposed four specific actions including things that Facebook was already doing. A few months later Facebook released a white paper reiterating the ideas. When it was presented to the European Union, the official responsible described it as “too low in terms of responsibility.” It is this same set of proposals that are the basis for Facebook’s multimillion-dollar television, print and digital advertising campaign proclaiming, “We support updated internet regulations.”

Affirming the need for oversight of digital platforms is a positive step and should be applauded. But for the last 20 years, tech companies such as Facebook have fought government oversight, warning that regulation would break the magic of digital technology and the wonders of “permissionless innovation.” Now, however, as other nations, and even states within the U.S., have made differing efforts to mitigate the harms delivered by Big Tech, a common set of national rules no longer seems so onerous.

A tried-and-true lobbying strategy is to loudly proclaim support for lofty principles while quietly working to hollow out the implementation of such principles. The key is to move beyond embracing generic concepts to deal with regulatory specifics. The headline on Politico’s report of the March 25 House of Representatives hearing, “D.C.’s Silicon Valley crackdown enters the haggling phase,” suggests that such an effort has begun. Being an optimist, I want to take Facebook at its word that it supports updated internet regulations. Being a pragmatist and former regulator, though, I believe we need to know exactly what such regulations would provide.

Read more: Facebook’s “Oversight Board” Is a Sham. The Answer to the Capitol Riot Is Regulating Social Media

At the March hearing, Zuckerberg was asked by Vermont Rep. Peter Welch, a Democrat, if he would support creating a new federal agency to regulate digital platforms. The reply was encouraging: “The solution that you’re talking about could be very effective and positive for helping out.” Such an agency has been proposed by a group of former regulators of which I am part. If the haggling has begun, it is worthwhile to identify some of the items worth haggling over.

First off is the new agency itself. The preponderance of proposals in Congress are to give increased authority to the Federal Trade Commission (FTC). The FTC, its commissioners and staff are dedicated public servants, but the agency is already overburdened with an immense jurisdiction. There is a history of companies seeking to transfer oversight to the FTC in an effort to get its issues lost amid other the issues of other companies. Oversight of digital platforms should not be a bolt-on to an existing agency but requires full-time specialized focus.

The European Union has proposed a new regime to regulate platforms that have “gatekeeper” power. The United Kingdom has similarly proposed new oversight for platforms with “significant market share.” The United States, too, needs a focused and specialized government oversight to protect consumers and competition.

Digital companies complain (not without some merit) that current regulation with its rigid rules is incompatible with rapid technology developments. To build agile policies capable of evolving with technology, the new agency should take a page from the process used in developing the technology standards that created the digital revolution. In that effort, the companies came together to agree on exactly how things would work. This time, instead of technical standards, there would be behavioral standards.

The subject matter of these new standards should be identified by the agency, which would convene industry and public stakeholders to propose a code, much like electric codes and fire codes. Ultimately, the agency would approve or modify the code and enforce it. While there is no doubt that such a new approach is ambitious, the new challenges of the digital giants require new tools.

Such a structure could help deal with the current congressional concern about misinformation, for instance. The agency could identify harmful content as an issue, convene a code-setting group and instruct that group to develop behavioral standards by which the companies would build algorithms to curate content for veracity rather than revenue and identify and mitigate harmful content as an editorial responsibility. These standards could require transparency into such efforts and mandate audits to assess the platforms’ efforts.

The new agency could also develop a code of privacy practices. Currently, the “privacy protections” of the platform companies are not “protections,” but rather “permissions” to which the consumer must consent before being allowed to use the service. Those policies are typically indecipherable legalese and vary from one platform to another. The new agency could oversee, approve and enforce privacy expectations for the digital platforms.

It could also be an important part of efforts to promote and protect competition in the digital marketplace. The Justice Department and FTC would continue their enforcement of the antitrust laws, and Congress would consider whether and how to update those laws. Yet a limitation of antitrust enforcement is that it focuses on a single company rather than broad industry practices. The new agency could enhance competition through specified and enforceable industry-wide behavioral expectations that identify and ban anti-competitive activities while mandating the promotion of pro-competition activities.

“Technology has changed a lot since 1996,” the Facebook ads proclaim, “Shouldn’t internet regulations change too?” The answer is “of course.” The relevant question for the authors of the ad campaign is, just what kind of regulation does Facebook support? 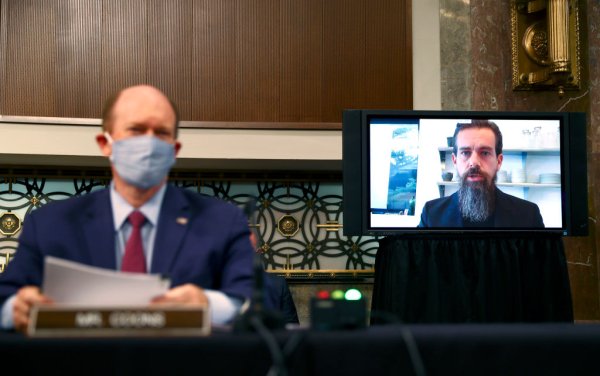 The Biden Administration Must Focus on Antitrust
Next Up: Editor's Pick