When COVID-19 erupted in New York City last spring, it forced me to make a decision as to whether or not I would work the disaster as an emergency medical technician. Unlike the thousands of New York City EMTs and paramedics who ride on ambulances for the city, private transport companies and hospitals, as a volunteer EMT I rode for free, so I had a choice about what part I would play in the pandemic.

When calls for “sick-fever-cough” patients started to infiltrate the city’s 911 system last March, every first responder I know was terrified. I was, too. One night my EMT partner and I sat in my car after a tour and had a long existential conversation. Was volunteering to work as EMTs during a lethal contagion the stupidest thing we could do? Or was it the most self-sacrificing?

In the end I decided to ride. I was far from the only rescuer who wanted to be of service when crisis struck. An army of almost 90,000 health care workers volunteered to step up and bolster the front line in New York.

Read more: Heroes of the Front Line: Stories of the courageous workers risking their own lives to save ours

Every first responder who worked the wartime tours last spring can tell you about what aspect of working COVID-19 was the hardest for them personally. Many nights, the most difficult part of disaster for me was managing family members of the sick. One of my most memorable calls was for a man in his 80s who lived with his son. We found the patient lying in bed, contracted and shivering, so short of breath he could barely speak. While we took his vitals, his son explained that his father, a smoker, had pneumonia, diabetes and a history of heart disease.

“He hasn’t been outside at all,” the son said. “I don’t want him to catch COVID because of his medical history and age, so I’ve been really careful. I only go outside for groceries, and I always change my clothes and wash my hands when I come home.”

The patient’s blood-sugar level was worrisome, over 200 mg/dL. Sugar that high could cause blindness and strokes, kidney failure and heart attacks. My partner and I told the son we had to take his father to the ER—alone. Family members and visitors were not allowed inside hospitals at the time.

The son’s face drained of color. He had a tormented look in his eyes. I could tell he was reckoning with the fact that he had no choices. When he spoke, his voice broke. “I understand,” he said. “If he needs to go, then I need you to take him. He’s been coughing like crazy for days.”

The son started to put on his coat and looked around the room for his shoes. He was standing in the bedroom with his eyes darting all around, living in a world we no longer inhabited, where he got to accompany his father to the ER.

“I’m so sorry, sir,” I said. “But you can’t come to the hospital with us. They won’t allow any visitors right now.”

The son looked at me with a pained expression, and I saw the world’s sorrow slash his face. “I knew that,” he said. “Right, I heard that. I guess I just…I didn’t fully understand. I really can’t come with him? He’s my dad.”

It felt horrible to tell families their worst nightmare was coming true. We were taking their parents to the hospital without them, almost certainly to die. We loaded the patient into the ambulance and the son squeezed his father’s foot.

His father smiled. My partner closed the ambulance doors. I stood in the grass with the patient’s son. He rubbed his temples, took his face in his hands and convulsively wept.

Read more: The Cost: 2 months of indelible photographs from the pandemic in America and the stories behind them

The virus did that. Made tough men weep. COVID-19 taught me this lesson again and again. A dozen nightmarish variations on the same theme with each call.

“This is so sad,” he said. “He’s my father. He lives with me so I could take care of him. This is it? This might be the last time I get to see him? This is unbearable.”

A year into the pandemic, a lot of EMS workers in New York are still struggling to process the horrors and heartbreak of last spring. When I think of last March and April, I feel tired and defeated, watermarked with sorrow.

We carry many heavy things as EMTs: stair chairs, tech bags, patients. But one of the heaviest things we carry are stories. Every rescuer copes with trauma differently. Some EMTs and medics told me they’ve turned to drinking and working more to try to manage the stress. The New York City Trauma Recovery Network, an organization that provides free EMDR (Eye Movement Desensitization and Reprocessing) therapy to front-line workers, has been offering us counseling. But many front-line workers haven’t gone because the disaster is ongoing and they’re too busy working.

Many nights, the landscape in New York City Emergency Management Services feels bleak. EMTs and paramedics in the city are still fighting for better pay and benefits. Some volunteer corps are struggling to make ends meet financially. Assaults against the New York Fire Department’s EMTs and paramedics, often by volatile patients, continue to be a problem.

And yet I still find myself picking up tours on the ambulance.

The thankless, high-risk work EMTs and paramedics do is often called a “calling” because it makes no sense. Because it’s unexplainable. What people don’t understand is that emergency medical services is a family. Many of us come from difficult backgrounds and feel more at home with each other on the street than we do spending time with civilians and blood relatives.

I never knew before I became an EMT four years ago how much I would come to trust and love my partners and first-responder colleagues. I look forward to nights on the ambulance more than any other nights of the week. I love being of service to people in need, and I love being part of a community of likeminded souls. I love the gallows humor between rescuers and the stories patients tell us on the back of the ambulance, a confession box on wheels, that they don’t tell anyone else.

If I had to go back to last spring, I would do it all over again. It was an honor and a privilege to be on the ambulance in the pandemic, to help people feel a little less frightened and alone at the critical hour. It still is. And even though the nightly applause has stopped, EMTs are still out there all day and through the night. Remember them. Support them. They will always answer the call. 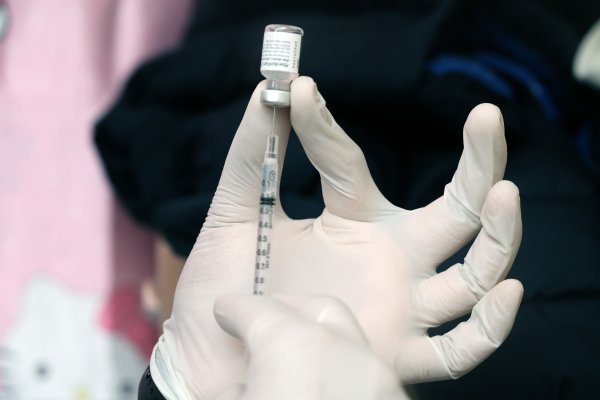 Vaccines Stop Infection, But You Still Need to Wear a Mask
Next Up: Editor's Pick