What Asia's LGBTQ+ Movement Can Learn From Japan

Deputy chief priest Myokan Senda poses for a photograph at Saimyo-ji Buddhist Temple where he has announced he will conduct LGBT weddings after local authorities formally recognised same-sex partnerships in May, on June 25, 2020 in Kawagoe, Japan.
Carl Court/Getty Images
Ideas
By Brian Wong
Brian Wong is a DPhil in Political Theory candidate at Balliol College, Oxford, and a Rhodes Scholar from Hong Kong. They are the founder of the Oxford Political Review.

On Mar. 17, a district court in Sapporo, Japan ruled that the government’s failure to recognise same-sex marriage was “unconstitutional.” The court also found that the official view of marriage—as exclusively a union between “both sexes”—contravened constitutional commitments to equality for all Japanese.

Japan is the only G7 state without laws to prohibit discrimination on grounds of sexual orientation, let alone laws to permit same-sex marriage. But the Sapporo judgment could well change this, heralding as it does a shift in Japanese society.

It also comes off the back of decades of perseverance from activists and allied politicians. The strategies, successes, and great patience of the LGBTQ+ movement in Japan offer a valuable glimpse into how queer activism can flourish in the socially conservative and culturally homogeneous societies of East Asia.

Three lessons can be drawn.

A gradual approach to LGBTQ+ rights pays off

First, an incrementalist approach can and does work in building critical political momentum for change. Instead of seeking to transform national attitudes and discourse at once, the Japanese movement strategically targeted local courts, and municipal governments, gradually pressing them for concessions and reforms.

In February 2015, for example, a new procedure was established in the Shibuya district in Tokyo by which same-sex couples could apply for proof-of-partnership documentation, granting members access to hospitalized partners and other shared benefits. The measure’s architect, local councillor Ken Hasebe, was inspired by San Francisco’s vibrant LGBTQ+ scene and Tokyo’s transgender community. Shibuya’s move was subsequently echoed in major cities across the country, such as Sapporo, Fukuoka, and Osaka, as well as in smaller communities.

Read more: Marriage Equality Comes to Taiwan in a Historic First for Asia

In the six years that have elapsed, the recognition of same-sex partnerships has become a salient political issue on the national level, aided by established parties seeking a more modern public image. The governing Liberal Democratic Party (LDP)—traditionally no friend to the LGBTQ+ cause—has substantially moderated its position, even if some accuse it of paying more than lip service.

In the 2016 elections, the party pledged to “promote understanding of sexual diversity” in its manifesto. This was a response to both international pressure on the country to improve civil rights in time for the 2020 Summer Olympics, as well as internal pressure from members frustrated by the LDP’s intransigence on social matters—among them Tokyo Governor Yuriko Koike. (She quit the LDP in 2017 and founded a new political party that incorporated LGBTQ+ progressivism into a platform that was otherwise conservative on social matters.)

Supporters react to the Sapporo District Court's decision that it is unconstitutional to not allow same-sex marriage in Sapporo, Hokkaido prefecture on Mar. 17, 2021.
JIJI PRESS/AFP via Getty Images

Secondly, the movement has benefited from its quiet focus on specific areas where consensus can be built—healthcare, education, and employment—while avoiding those guaranteed to alienate conservative voters, such as ideological assertions of gender identity and sexual orientation.

For one, pioneers in the movement framed trans rights as a public health issue in 1990s. Gender confirmation surgery was legalized in the late 1990s, as a “treatment” for gender dysphoria. Aya Kamiwaka, the first-elected Japanese trans politician, then successfully pushed for trans citizens to be permitted to change their gender in official registration documents, on the grounds that doing so would enable “broader recognition and support” for those who have undergone surgery.

Bullying in schools and universities has meanwhile been a long-standing issue in the country, where suicides on campuses are poignant reminders of the dearth of mental health support for vulnerable young people, LGBTQ+ youth among them. The death of a gay graduate student in 2015 was invoked by campaigners as evidence of the urgent need for a zero-tolerance policy on harassment and hate speech.

Read more: Here’s What’s Next for LGBTQ+ Rights in Japan

In 2017, the education ministry amended its national bullying policy to enable schools to address bullying on grounds of sexual orientation and gender identity. Anti-outing laws were passed in some localities, with the mental health and well-being of students uniting politicians across the aisle. Even the conservative ruling party proposed the LGBT Understanding and Enhancement Bill in 2019, with the stated aim of “realizing a tolerant society that accepts the diversity of sexual orientation and gender identity”.

The movement adopted similar tactics in advocating employment rights. The Equal Employment Opportunity Law, to this day, does not offer protection to LGBTQ+ workers, but in 2013, the Ministry of Health, Labor, and Welfare added a clause to the model Rules of Employment given to employers, forbidding harassment “related to sexual orientation or gender identification.“

The change emerged from liaison between labor unions, legal counsel, and political advisors to the ministry, with the aim of making working in Japan more attractive to foreign talent. Putting forward a strong economic case enabled the movement to gain traction among leading business networks and even blue-collar workers, who often look to the country’s oligopolies for political cues.

Colourful costumes and signs seen during the parade at the sixth annual Tokyo Rainbow Pride event, on May 7, 2017 in Tokyo, Japan.
Damon Coulter / Barcroft Media via Getty Images

Finally, the movement has sought to reconcile LGBTQ+ rights with the traditional family values espoused in mainstream Japanese discourse.

Feudal Japan had been tolerant of homosexuality, but the Meiji Restoration and post-World War II era saw the ascent of Christianity in the country, precipitating the outward conservatism that still pervades much of Japanese society. A 2013 poll found that just 54% of the population agreed that homosexuality should be accepted in society; 36% said that it should not.

Against this background, the movement has devoted substantial effort to demonstrating the compatibility between the family and diversity in sexual orientation. Through working with churches, paralegal groups, and community associations, activists have sought to dispel popular narratives and tropes concerning gay and lesbian individuals, explicitly invoking the centrality of marriage to a stable family structure as grounds for marriage equality.

East Asia remains a region where social tradition and sexual progressivism often find themselves at loggerheads. Yet this need not be the case. Same-sex marriage, trans rights, and recognition of nonbinary identities are all causes that can be advanced in alignment with traditional values. For instance, the view that parents and educators ought to support more robust LGBTQ+ protections, because doing so is an important mental health issue for the significant minority of youth who are so identified, has gained traction across both Mainland China and Hong Kong.

In societies where dominant cultural mores remain inimical to progressive ideals, advocates must seize upon the opportunity to make themselves understood and welcome in mainstream discourse. The path ahead for the Japanese LGBTQ+ movement is by no means clear. But it exemplifies many virtues that others in East Asia can emulate. 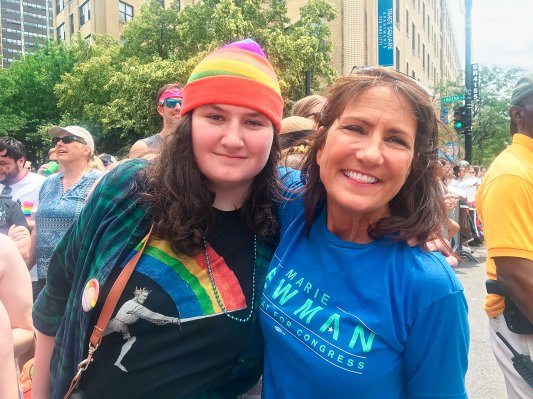 Why the Equality Act Matters For Our Family
Next Up: Editor's Pick