Keep the Filibuster, There Are Better Ways to Reform a Broken System

Senate Minority Leader Mitch McConnell, a Republican from Kentucky, stands in an elevator at the U.S. Capitol following the Senate Republican luncheon in Washington, D.C., U.S., on Wednesday, March 3, 2021.
Photographer: Stefani Reynolds/Bloomberg via Getty Images
Ideas
By David French
French is a senior editor at The Dispatch and a columnist for Time. His new book is Divided We Fall: America's Secession Threat and How to Restore Our Nation. He is a former major in the United States Army Reserve.

It took only days for Democratic jubilation to fade. After passing an immense $1.9 trillion COVID aid package that was one of the most expensive and significant pieces of social legislation in a generation, the Biden administration realizes that much of the rest of its agenda—election reform, gun control, and civil rights—is dead on arrival in the Senate, a Senate that Democrats only narrowly control.

The reason, of course, is the filibuster, the procedural maneuver that allows 41 senators to block multiple forms of substantive legislation. And so, naturally, there are calls from many Democrats to abolish the filibuster, enable all legislation to pass through simple majority vote, and break the legislative deadlock.

When I was researching my book, Divided We Fall, which argues that America is in the grip of cultural and political trends that could tear it apart, I discovered that thoughtful progressives and thoughtful conservatives each suffered from different, deep fears about our political future. Progressives feared minoritarian rule. Conservatives feared majoritarian domination. Ending the filibuster, perversely enough, makes both fears more real.

Let’s look at minoritarian control. The Republican Party has won exactly one popular vote for president since 1988, George W. Bush’s narrow 2.4 percent edge over John Kerry in 2004. Yet it won three presidential elections in that span of time, and only a margin of 42,921 votes in three states (Arizona, Georgia, and Wisconsin) stopped Donald Trump from winning re-election with a second consecutive substantial popular vote minority.

At the same time, combine the geography and political demographics of the United states with the countermajoritarian elements of the Constitution, and Republicans not only have a present electoral college advantage over Democrats, they also have inherent advantages in both the House and the Senate.

What does this mean? Do away with the filibuster, and it’s entirely possible that the next Republican government could enjoy immense legislative power without a majority of the popular vote. In fact, they could lose voters by margins numbering in the millions, yet still exercise decisive control over the government.

The problem is clear—substantial government reforms in the face of impotent majority opposition can destabilize a democracy. Yes, minorities can exercise a degree of control now, but remove the filibuster, and minorities could directly legislate to a degree they could not even at the height of GOP power before the midterm elections in 2018.

So too can absolute majority control. The Democratic Party is seeking to pass laws that would introduce dramatic changes in American elections, transform free speech doctrine, and potentially limit religious liberty. Yes, the Supreme Court can act as a check against unconstitutional legislation, but if court-packing is a simple majority vote away, as some liberals want, then majorities will exercise unacceptable influence over constitutional doctrine itself. The notion that core civil liberties could hinge on congressional majorities is just as destabilizing as minoritarian control.

But let’s be clear that there is no doubt that maintaining the filibuster carries a cost. The GOP, for example, is currently in the grips of a Trumpist base that prioritizes angry opposition over compromise. The party largely lacks a positive agenda, so (with some notable exceptions) its priority is clear: No compromise, even when compromise might be prudent. Stop the Democrats. Some Republicans have gone further, descending into a fantasy world of dark conspiracies.

And make no mistake, Democrats are not eager to accommodate Republicans. One party may be more functional than the other, but both parties share abundant blame for the state of American politics.

Is there a better way? Yes, through decentralization, de-escalation, and strategic moderation. Decentralization means focusing more on state-level reforms. An overwhelming majority of Americans live in so-called “trifecta” states, places where one party controls the governor’s mansion and both houses of the state legislature. That means most Americans live in jurisdictions where, for example, election rules, civil rights laws, gun laws, and a wide variety of economic and social policies are within their partisan control.

Gridlock in Washington does not have to mean gridlock in government, and an emphasis on local control can and should reduce the stakes of federal disputes. In other words, state and local governments should be the principal instrument of legal and political reform. Washington should occupy a less prominent place in our minds. A short-hand way of saying this is let California be California and let Tennessee be Tennessee.

There is also a path to de-escalation. Research demonstrates that a majority of Americans are exhausted by partisan politics. Motivated minorities drive most American polarization. Gerrymandered districts dominated by highly-activated primary voters mean that all too many members of the House need only worry about challenges from extremist candidates and are thus constantly pulled to the partisan edge.

A combination of redistricting reform and voting reforms like ranked-choice voting can limit the powers of partisan extremists. Ranked-choice voting—which allows voters to list candidates in order of preference—most notably can reduce the chances of highly-partisan pluralities dominating political primaries.

Finally, candidates matter. While progressives lament the power of moderate Democrat Joe Manchin, it remains remarkable that a Democrat holds down a Senate seat in one of the most Republican states in the nation. West Virginia voted for Donald Trump by an astonishing 39 points in 2020. Progressives also lament the power of moderate Arizona Democrat Kyrsten Sinema, but without her upset victory in a previously solid-red state, Democrats would not control the Senate.

In fact, both parties can learn from the power of strategic moderation. The GOP has elected successful and popular governors in Massachusetts and Maryland, two deep-blue states, and there’s presently a Democratic governor in Louisiana. During Obama’s presidency, a Republican won a Senate race in Massachusetts. During Trump’s term, a Democrat won a Senate race in Alabama. Yet all too often primary voters fail to understand that the quest for partisan perfection can be the enemy of the political good. In reaching for everything, they gain nothing.

The answer to polarization and gridlock is not partisan escalation. Ending the filibuster would only ramp up partisan acrimony and increase the level of fear and anxiety around American elections. There are better paths through American division. We should try those before we enable drastic measures like majoritarian dominance or minoritarian control. 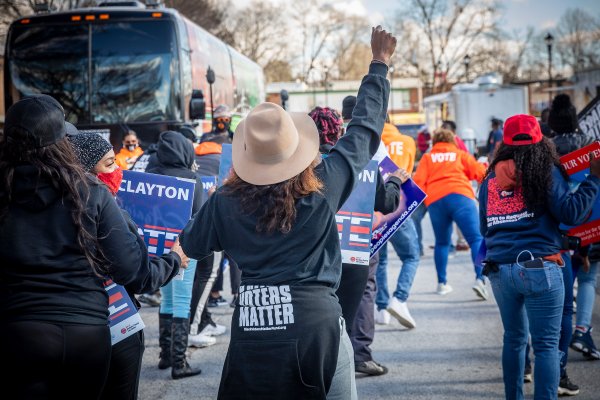 What Democrats Must Do for Black Voters
Next Up: Editor's Pick