Jeremy Lin: Despite Fear and Anger After the Atlanta Shootings, There Is Hope

A makeshift memorial for the eight people who were killed during attacks on three Atlanta-area spas on Tuesday, at Gold Spa in Atlanta, March 21, 2021. Now last week's shootings, in which Robert Aaron Long, 21, has been charged with eight counts of murder, are providing a major stress test for when the legislation can be applied, what it can achieve and how it plays into the state's increasingly polarized politics.
Chang W. Lee—The New York Times/Redux
Ideas
By Jeremy Lin with Patricia Sun
Jeremy Lin is a nine-year NBA veteran. Patricia Sun is the CEO of JLIN Marketing.

What else is there to say?

In a terrible way, this felt almost inevitable. Like when your worst fears come true.

Even as Asian Americans watched with dread as “Kung Flu” and “China Virus” got thrown around last year, we hoped that things would calm down again, that people would see our calls for action and see the racism in plain view. But it didn’t happen.

It kept getting worse.

On March 16, news of the Atlanta shooting made my heart sink. The world felt darker and more frightening than ever before.

And then there was anger. So much anger.

Anger at how long we’ve been told that even though we are always the butt of racist jokes, these are just jokes, and geez, please don’t be so sensitive.

Anger at how our beautiful, rich cultures and vastly different histories are ripped apart and mashed into one giant, demeaning, “exotic” stereotype.

Anger at how the model minority myth allows people to write us off as “doing great” when the most vulnerable of us—our precious elders and Asian Americans struggling to get by—continue to suffer, be dismissed and be targeted.

Anger that the dangerous objectification of Asian women is regularly dismissed because “isn’t it a compliment to be considered attractive?”

Anger at how even after murdering EIGHT people in cold blood, a white male shooter somehow deserves more empathy than the innocent women and men he killed and the devastated families they left behind.

Anger that suddenly all of the same Asian celebrities and authors and representatives are now being asked to speak out because guess what— as a society we never let that many Asian people be represented in mainstream media in the first place.

Anger at how much real and justified hurt there is between the Asian and Black communities even though the system that hurts us is one and the same.

Anger at how demoralizing it is to have to draw analogies and make artwork and tell stories and attend rallies just to hope we can prove to other people that WE TOO, ARE HUMAN.

So, where do we go from here?

I ask myself that a lot. I don’t feel qualified to speak for all Asian Americans. I don’t know all of the history, the nuances, the statistics, the intersectionality. I’m not brave for having been called slurs before.

I didn’t do enough when I was “Linsanity” to break down barriers for the next generation. I just wanted to play basketball during that time in 2012 when I was suddenly thrust into the global spotlight with the New York Knicks. I didn’t recognize the built-up trauma and the multigenerational, systemic injustices. I failed to appreciate and better support the work of advocates fighting for Asian Americans to be seen and heard. It’s one of my biggest failures and one of my biggest regrets.

But for whatever reason, I still have this platform. And I have to believe that things are starting to change.

I think of Benny Luo and his team at NextShark, of Dion Lim, Vicky Nguyen, CeFaan Kim and all the other Asian-American reporters that work long hours and set aside their own grief to make sure Asian-American stories get told. I think of Sarah Wan and her team at Community Youth Center of San Francisco who mobilized Vietnamese-speaking staff right away after 83-year-old Ngoc Pham was attacked and sent to the hospital. I think of Russell Jeung and Stop AAPI Hate who had the foresight to know that if they didn’t count the hate incidents happening to Asian Americans, no one would believe us. I think of Mandy Sun, Sarah Xu and other youth at Boston Chinatown Neighborhood Center, who under the leadership of Joann Lu Yung and other youth leaders, wrote a letter to their superintendents asking for anti-Asian racism to be addressed in their schools.

I think of so many others, in so many different walks of life, working hard to make sure our humanity is recognized. And I realize we have to keep on pushing and not lose hope.

Hope that we can all set aside our egos for a moment to see where we might have casually dehumanized someone else. Hope that we would listen when a group of people share their pain and seek to empathize before we dismiss. Hope that we would each, whatever our race, one day be able to be known in the fullness of who we are.

This past year has seen some of our worst fears come true and revealed some of the ugliest parts of our society. And it will take courage to confront what we see.

In the nine years since Linsanity, people challenged me, educated me and forgave me. Everyday, I’m trying to learn more, listen more, judge less. And if we fight TOGETHER, I truly believe some of our greatest hopes can be realized.

We owe it to the people who fought before us and the generations that come after us to make this world a better place. History is in our hands.

So I ask again. Is anyone listening??? 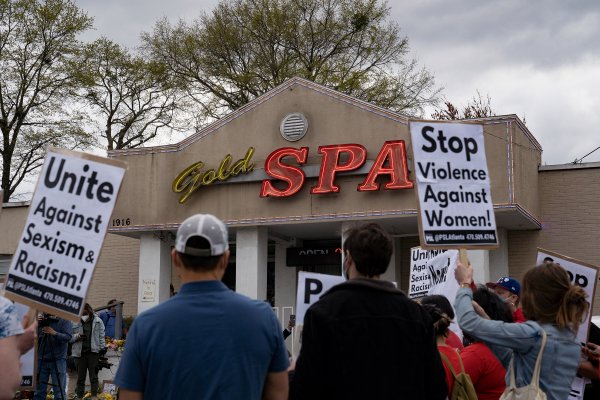 If You're Surprised by Anti-Asian Violence, You Haven't Been Listening
Next Up: Editor's Pick