'It Is Dangerous To Speak Up In India Today.' What the Resignations of 2 Academics Show About Freedom of Expression Under Modi

Two prominent academics stepped down from their positions at one of India’s most respected universities this week, shining a spotlight on the state of academic freedom and a widening crackdown on dissent under the Hindu nationalist ruling party.

Pratap Bhanu Mehta resigned from his position as a professor of political science at Ashoka University near Delhi on Monday. In his letter of resignation, reproduced online Thursday, Mehta suggested that he had been forced to step down because of indirect pressure by the Indian government. In newspaper columns and academic work, Mehta had been critical of the majoritarianism of the ruling Bharatiya Janata Party (BJP).

Arvind Subramanian, an economics professor at Ashoka who once served as chief economic adviser to Prime Minister Narendra Modi, also resigned from his position on Thursday in solidarity with Mehta, calling his treatment an affront to “academic expression and freedom.”

The resignations are the latest example of what observers say is a tightening of academic freedoms, and dissent more broadly, driven by the ruling Hindu nationalist BJP. In 2020, the U.S. NGO Freedom House down-ranked India’s academic freedom score from three to two out of a possible four, “due to rising intimidation in recent years that is aimed at controlling academic discussion of politically sensitive topics.”

Police have also increasingly used sedition and anti-terror legislation to intimidate academics, journalists and activists, says Harsh Mander, a prominent academic who has been on the receiving end of government intimidation. “The government feels now that its only opposition is some voices in academia and civil society, and they are the only barriers to recasting India into a Hindu supremacist nation,” says Mander, who was charged with incitement to violence for a speech he made at a peaceful anti-government protest in 2019. “They have used many tactics to create fear.”

In his resignation letter, Mehta suggested that he had been forced to step down because of indirect pressure on Ashoka University from the Indian government. “After a meeting with [the university’s] Founders it has become abundantly clear to me that my association with the university may be considered a political liability,” he wrote. “My public writing in support of a politics that tries to honor constitutional values of freedom and equal respect for all citizens, is perceived to carry risks for the university. In the interests of the university I resign.”

The founders of Ashoka, a privately-funded university established in 2014 as India’s answer to the Ivy League, had told Mehta in a meeting that his criticism of the Indian government was threatening the planned expansion of the university, according to an Ashoka employee with knowledge of the conversation, who requested anonymity out of concern for their job.

Neither Ashoka University nor the Indian government responded to TIME’s requests for comment. But in response to a similar allegation reported by the Edict, Ashoka’s student newspaper, a co-founder of the university said the Edict’s article was “factually inaccurate.” Mehta did not respond to a request for comment.

Mehta was formerly the university’s vice-chancellor, its highest academic post, until he stepped down in 2019. At the time, he cited personal reasons, but many have speculated that there was political pressure then, too. “That step sat uneasily for many of us, because it appeared that this was part of an escalating strategy where public intellectuals, civil society advocates, and human rights defenders who are progressive, liberal, with a certain idea of the free university and freedom of speech in a democratic society, were being identified, discouraged, and targeted,” says Angana Chatterji of the Center for Race and Gender at the University of California, Berkeley. “The government wants to send a message that it’s not just state institutions, [but] any institution that takes a position critical of the government [that] will be viewed and treated as unacceptable.”

Subramanian, the other academic who resigned from Ashoka on Thursday, cited the alleged pressure on Mehta as a reason for stepping down. “That someone of such integrity and eminence, who embodied the vision underlying Ashoka, felt compelled to leave is troubling,” wrote the prominent professor of economics. “That even Ashoka—with its private status and backing by private capital—can no longer provide a space for academic expression and freedom is ominously disturbing.” Subramanian has been a critic of the government’s economic policies since stepping down from his role as an economic adviser in 2018. He did not respond to a request for comment.

For Chatterji, an Indian academic based in California whose work has focused on the rise of Hindu nationalism in India, the experience of intimidation is personal. In 2008, police attempted to charge her with inciting violence against the state, citing an article she had authored that investigated unmarked graves in Kashmir, where the Indian government has been blamed for human rights abuses in its decades-long counterinsurgency campaign. That was before the BJP came to power in 2014 — but since the party was elected, Chatterji says, she has often found it difficult to return home to India from the U.S. because of threats from individuals associated with Hindu nationalist organizations.

Other areas of civil society are also facing censure in India. In 2020, the government forced the Indian branch of Amnesty International to cease its work in the country, after it publicly criticized the government’s human rights record. “In a myriad of ways, people are being harassed, subdued, subjugated in India today,” Chatterji says. “It is dangerous to speak up in India today.” 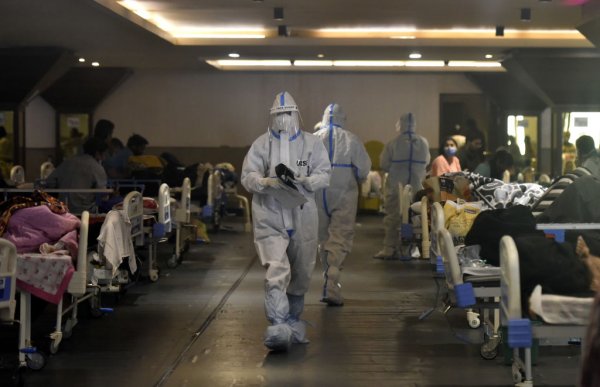