The first high-level talks between the U.S. and China since President Joe Biden took office descended immediately into bickering and recriminations, with each side sharply criticizing the other over human rights, trade and international alliances.

U.S. Secretary of State Antony Blinken began his remarks at the meeting in Anchorage, Alaska, by vowing to raise concerns about recent cyber attacks, the treatment of Muslim minorities in Xinjiang and Beijing’s increasing control over Hong Kong. He said China’s actions threatened the international order and human rights.

“The alternative to a rules-based order is a world in which might makes right and winner takes all and that would be a far more violent and unstable world,” Blinken said.

The Chinese fired back. Yang Jiechi, a member of the Politburo, offered a lengthy monologue in which he said Western nations don’t represent global public opinion and called the U.S. the “champion” of cyber-attacks.

“Many people within the United States actually have little confidence in the democracy of the United States,” he said, citing the killing of Black Americans and the Black Lives Matter movement. Near the end of his opening remarks, he said Blinken’s comments weren’t “normal” and added that in response “mine aren’t either.”

Blinken and National Security Advisor Jake Sullivan responded, with Sullivan saying “a confident country is able to look hard at its own shortcomings and constantly seek to improve, and that is the secret sauce of America.”

Things only got worse from there. Cameras were ushered from the room, only to be called back in. Yang and Foreign Minister Wang Yi took the opportunity to follow up with even more criticism.

“Is that the way you had hoped to conduct this dialogue?” Yang asked, according to his delegation’s translator. “I think we thought too well of the United States. The United States isn’t qualified to speak to China from a position of strength.”

While the Chinese officials protested that the opening criticism by Blinken and Sullivan was no way to treat guests, a senior U.S. official said afterward that the Chinese were intent on grandstanding and engaging in theatrics over substance.

The rocky start signaled just how bad the U.S.-China relationship has become and augured poorly for the prospect of an accommodation or rapprochement between the world’s two biggest economies. The two sides scheduled a series of three negotiating sessions on Thursday and Friday, but the opening lowered what had already been a low bar for expectations out of the Alaska meeting.

Before the meeting began, officials in Beijing had raised the possibility of a virtual summit between Biden and Chinese President Xi Jinping next month, to coincide with Earth Day and turn attention to one area both sides have said they can reach agreement on: combating climate change. It’s not clear if the rocky start to the Alaska talks will derail that effort.

Some tensions were expected at the Anchorage talks. Two months into office, and despite Biden’s criticism of former President Donald Trump, it appears the new American president is unlikely to make major changes to his predecessor’s hard-line approach to China. On human rights in Xinjiang, on Hong Kong’s and even on tariffs, Trump-era policies remain in place.

“At least initially, they’re sticking with what Trump left them,” said Aaron Frieberg, a professor of foreign policy at Princeton University and a national security aide under President George W. Bush. “On concrete things like saying China is committing genocide in Xinjiang — that was a land mine left for them on the way out the door — instead of trying to work around it, they just embraced it.”

China is the most prominent example of Biden’s continuity with Trump so far, but there are others: On Saudi Arabia, Biden held back from sanctioning Crown Prince Mohammed bin Salman even as he went beyond Trump by publicly implicating him in the death of columnist Jamal Khashoggi. Biden is taking up Trump’s push to reinvigorate the Quad alliance of the U.S., Australia, Japan and India. Blinken has praised Trump’s “Abraham Accords,” the rapprochement between Israel and countries in the Middle East.

And while Republicans in Congress accuse Biden of weakness, he is sticking to opposition to the Nord Stream 2 pipeline from Russia to Germany, is refusing to remove sanctions on Iran unless it returns to compliance with the nuclear accord that Trump abandoned and is keeping up a frequent resort to financial sanctions as a tool to express disapproval.

—With assistance from Linly Lin. 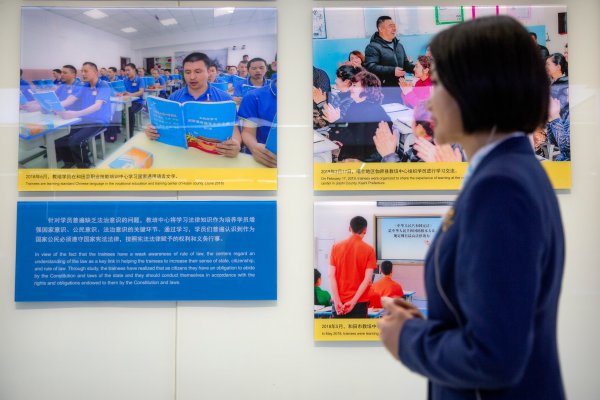