Israel's COVID-19 Vaccination Rollout Is Slowing at a Critical Moment. That's a Warning for the Rest of Us

Now that nearly 60% of Israel’s roughly 9 million residents have gotten at least one shot of a COVID-19 vaccine, the New Jersey-sized Middle Eastern country is offering the rest of the world an enviable glimpse of a future where most people are inoculated against the coronavirus. While it’s still too early to tell the full extent to which vaccination is having an effect there, Israel’s rate of virus-related deaths has dropped faster than global figures since it started vaccinating (see chart below and methodology at bottom). Meanwhile, the latest real-world evidence collected in Israel suggests the Pfizer-BioNTech vaccine—the country’s most commonly administered shot—is preventing nearly 99% of deaths from COVID-19, while also curbing viral spread.

Israel’s mass vaccination efforts got off to an impressive start, with more than 10% of the population receiving their first dose fewer than two weeks into the national vaccination campaign. By comparison, it took the U.S. 57 days to reach the same mark, the U.K. 45 days, and the European Union still hasn’t matched it. Today, Israel is the worldwide leader in vaccinations per capita, at 108 doses administered for every 100 people, per the New York Times (the Pfizer vaccine requires two doses).

But Israel’s breakneck rollout is beginning to slow, according to data from the Israeli Ministry of Health. While the country was administering first doses to as much as 1.5% of its population every day in early January, it’s now distributing fewer than 0.2% of initial doses daily.

That’s a problem, as Israel remains short of the 70% mark that public health experts say is the minimum required level for mass vaccination to turn the tide against the pandemic in a given country.

A closer look at the data reveals that not everyone in Israel has benefited equally from the vaccine rollout. Only 67% of Arab-Israelis and 70% of Israeli Haredi Jews (a group sometimes referred to as “ultra-Orthodox” Jews) over 16 were vaccinated or had recovered from COVID-19 as of March 4, compared to 90% of the rest of the population, according to data shared by Weizmann Institute computational biologist Eran Segal. However, Israel has recently had success targeting older—and thus more vulnerable—members of those communities. By March 4, 84% of Arab-Israelis and about 80% of Haredi Israelis over 50 were vaccinated, up from 68% and 72% respectively on Feb. 22, according to Segal’s data.

Aside from being the right thing to do on moral grounds, better vaccinating these groups could push Israel over the critical nationwide 70% mark. To achieve that goal, Israeli public health officials have been working to address two major problems: vaccine hesitancy among these and other groups, and a failure to reach some residents who live in remote areas with less access to vaccination facilities and trustworthy information. Its efforts could be instructive for the U.S., which is also struggling with comparatively lower vaccination rates among some demographic groups, and for similar reasons. The Centers for Disease Control and Prevention only has race and ethnicity data for just over half of the vaccinations administered in the U.S. as of March 15, but of those shots, nearly two thirds have gone to white Americans, while less than 10% have gone to Hispanic or Black Americans, who make up 18.5% and 13.4% of the U.S. population, respectively.

In Israel, some groups are more vaccine hesitant or skeptical than others. A January survey from the Social Policy Institute at Washington University in St. Louis found that 51% of yet-unvaccinated Arab-Israelis and 42% of Israeli Haredi Jews weren’t planning to get the shot, for instance, compared to just 34% of those who identified as either secular, cultural, or Reform Jews. There’s a similar phenomenon occurring in the U.S., where 42% of Republicans, 35% of rural residents and 35% of Black Americans said in December that they probably or definitely will not get the vaccine, compared to just 27% of the general public, per the Kaiser Family Foundation.

Only 29% of Israelis overall say they trust the government, while 25% of Arab-Israelis say the same, according to the 2020 Israeli Democracy Index. Some Arab-Israelis have been angered by discrimination and hostility towards their community, as well as by Israel’s treatment of the Palestinian territories like the West Bank and Gaza, where vaccinations have barely begun. Some Haredi Israelis, meanwhile, feel their culture and belief system is incompatible with what they view as Israel’s secular mainstream society, and many trust religious leaders over secular authorities. During the COVID-19 outbreak, Haredi groups have butted heads with government officials over lockdowns and restrictions; some have gathered for holidays and funerals despite restrictions against large groups. In an August poll, more than half of Israeli Haredim said their community’s trust in the current government was shaken amid the pandemic.

All of this is relevant to the vaccine rollout, experts say, because people who distrust the government for any reason may be less likely to listen when it pushes a vaccine. “Sometimes, politics really goes against the interest of public health,” says Hadas Ziv, head of projects and ethics for medical nonprofit Physicians for Human Rights Israel. Arab-Israelis, Haredi Israelis and other Israelis have also been exposed to anti-vaccination messaging and misinformation on social media platforms like WhatsApp and via word of mouth.

Some of the U.S. groups expressing relatively high vaccine hesitancy are similarly distrustful of the government—just 9% of Black Americans told Pew in 2019 that they trust Washington all or most of the time, compared to 17% of white Americans, for instance. Former U.S. President Donald Trump’s politicization of the virus and vaccine approval sowed further skepticism, experts say—after Trump promised a vaccine by last year’s Election Day, about 62% of Americans told Kaiser that they were worried a shot would be green-lit for political reasons before it was proven safe and effective. Moreover, inadequate access to care and longstanding mistreatment by medical institutions has contributed to distrust of healthcare providers among Black Americans and other non-white groups. Misinformation about COVID-19 vaccines, meanwhile, runs rampant on American social media networks, as it does in Israeli online communities. While vaccine hesitancy has been dropping in recent weeks, according to a TIME/Harris Poll conducted earlier this month, it remains a major issue for U.S. health officials.

To help solve the credibility issue, Israeli public health officials have turned to trusted voices in communities with low uptake. This approach “turns the gaze of the community to the experts to the local expert—and then the local expert does the persuasion,” says Saad Omer, director of the Yale Institute for Global Health. In December, Aida Touma-Sliman, an Arab-Israeli member of Israel’s national legislature, tweeted a picture of herself being vaccinated to encourage other Arab-Israelis to do the same. “As someone who is very well known as part of the opposition, saying that in this situation, do not follow your mistrust of the government, but follow the best interest of your health—it sounds more like something to believe, than coming from Netanyahu: that despite my opposition, I am telling you, you should do it,” she says, referencing Israeli Prime Minister Benjamin Netanyahu. Yitzchak Zilberstein, a prominent ultra-Orthodox rabbi, shared a similar message with his community in December. “The risk of the vaccine is minimal compared to the many risks of the corona epidemic,” he wrote. Prominent Americans from Michelle Obama to Dolly Parton have similarly shared photos of themselves getting the vaccine in recent days.

Access is also emerging as an increasingly vital issue in Israel. Many of the country’s 9 million people live in urban centers, like Jerusalem and Tel Aviv; it’s been relatively easy for people there to walk into a vaccination site and get the jab. However, it’s been more challenging for the country to vaccinate people in historically underserved areas and communities, which are often largely Arab. “You can’t have places to get it in every tiny village,” says Orna Baron-Epel, a professor of health promotion at the University of Haifa. Similar patterns are playing out in the U.S., where access is suppressing vaccination rates in many predominantly Black neighborhoods, for instance.

Israel has recently been working to make the vaccine easier to get across the country. Aiman Saif, a former government official who’s been tapped to lead Israel’s COVID-19 response among Arab groups, told Jewish-American news outlet The Forward in February that Israel boosted the number of vaccination locations in Arab-majority areas from five or six to over 50, while also adding 30 buses as mobile vaccination stations. Leaders in Israeli Orthodox communities have organized vaccination drives and seminars at religious schools and other locations to boost uptake as well. In the U.S., health systems and local governments have deployed mobile vaccination clinics in rural areas and high density, low-income areas, and the Biden Administration has spearheaded efforts to distribute vaccines at community health centers serving low-income and minority patients.

Although Israel has shown that a lot can be done to reduce vaccine hesitancy and improve access, public health outreach to each of these groups must make up for decades of lost trust. While Israel has been making inroads in vaccinating some of the most vulnerable members of underserved groups, critics say leaders there were too slow to address these often predictable problems. Baron-Epel, for one, fears the government failed to invest enough resources in Arab communities earlier on, in particular. “The ideas are good, what they’re doing is good,” she says. “But it’s not enough, you know, and not fast enough.” The key lesson from Israel for the U.S. and other countries, then, may be a challenging one: hesitancy and access need to be addressed well before they become stumbling blocks late in the vaccine rollout.

Methodology note: The number of COVID-19 deaths in Israel peaked on Jan. 25 at 0.74 fatalities per 100,000 residents, compared to a global peak of 0.18 one day later, according to data from the Johns Hopkins Center for Systems Science and Engineering. While Israel’s peak value was much higher than the global average, its death rate has declined at a much steeper rate since the peak, though it’s too soon to know to what degree this can be attributed to vaccinations. For the sake of comparison, the first chart above presents both Israeli and global deaths as a percentage of the peak value—what’s called “normalizing” the data—so they can be easily compared.

—With reporting by Chris Wilson 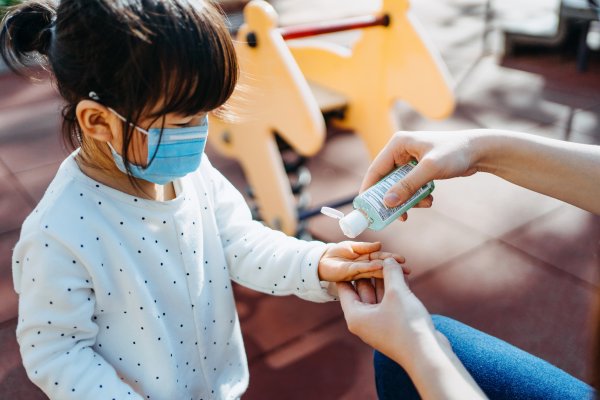 I Got the COVID-19 Vaccine. My Kids Didn't. What's Safe?
Next Up: Editor's Pick