Genius: Aretha Is a Lavish, Lively Showstopper That Hits a Few False Notes

“I am a princess in a fairy tale,” Aretha Franklin announces in the first episode of Genius: Aretha. It’s not a statement of fact so much as an act of magical thinking. Aretha (played with sparkling intelligence by Cynthia Erivo) is talking with the boundary-busting talent agent Ruth Bowen (Kimberly Hébert Gregory) about the public image she wants to create. The reality, at that point in the mid-1960s, is that Franklin is juggling a troubled marriage, a controlling father, a fraught relationship with two sisters who envy her success, and her duties as a 20-something mom of three—the oldest, Clarence, born when Franklin was just 12 and raised as “the family’s baby.” Franklin is struggling amid a racist, sexist industry to become the singular musician she knows she can be. Yet, her future as the Queen of Soul aside, the fairy-tale metaphor is apt. What is a mythical princess but an extraordinary young woman who extracts a happy ending from a story steeped in adversity, family strife, abuse and other psychosexual horrors?

It is this tension—the push of the subject’s incandescent talent and tireless ambition, and the pull of her complicated past—that animates the third season of National Geographic Channel’s docudrama series Genius and its first to spotlight a woman or person of color. Created by Suzan-Lori Parks, the Pulitzer-winning, MacArthur-anointed playwright who scripted the recent film The United States vs. Billie Holiday, Aretha is an uneven yet largely thoughtful, gripping and visually stunning portrait of a generational talent. Its sensitive, though not hagiographic, narrative illuminates a superstar with a widely beloved body of work but a poorly understood biography and inner life.

Rather than cram all 76 of Franklin’s years on earth into one eight-episode season, Aretha concentrates on a roughly two-decade span, beginning in the early ’60s, that encompasses her most creative period. We get a sense of how her professional triumphs, personal conflicts and political consciousness progress as she levels up from half-empty clubs to top-tier fame. Parks contrasts that heyday with black-and-white flashbacks to her childhood in ’50s Detroit, when Little Re (newcomer Shaian Jordan, in a devastating performance of stolen innocence) toured the tent-revival circuit, singing gospel alongside her father, the preacher and civil rights hero the Rev. C.L. Franklin (Courtney B. Vance, squeezing every ounce of nuance out of a complex role). To watch Re—already a mother but conspicuously childlike in dresses with Peter Pan collars and sausage-curled ponytails fastened with ribbons—sing to adoring congregations is to queasily confront the cognitive dissonance of a culture that still too often robs Black girls of their childhoods.

The show’s musical elements, including several full-song performances in each hour, dazzle. There are episodes that trace the making of legendary albums like Amazing Grace (the live gospel recording documented in a breathtaking 2018 film) and Young, Gifted and Black. Franklin’s voice was one of a kind, but Erivo—a brilliant performer who won an Emmy, a Tony and a Grammy for her work in Broadway’s The Color Purple, and is bound to EGOT any minute now—does its versatility justice. The visual details, from exquisite costumes to sets that precisely capture their respective places and times, are equally virtuosic.

Less impressive are the directing and, in some instances, the dialogue. Franklin’s story is the stuff of high drama, and it merits the grand emotional register in which it’s told here. What’s disappointing are the gimmicky choices, like a black-and-white scene set at C.L.’s church that slowly transitions into color as Little Re’s singing electrifies the room, that can overpower the subtleties of masterly acting from Erivo, Vance and Jordan. Too many expository lines articulate sentiments that are already apparent in the performances. “She’s exorcising her demons,” Ruth explains, unnecessarily, during a cathartic studio session. “You changed music,” superproducer Jerry Wexler (an egregiously miscast David Cross) tells Aretha, after listing their biggest hits.

The scripts stumble, particularly, when it comes to contextualizing the development of the singer’s political engagement, from a childhood under the influence of C.L. and other early civil rights leaders through a rushed re-enactment of her public offer to post bail for Angela Davis in 1970. Martin Luther King Jr. appears in one episode, but the show reduces him to a mirror for C.L.’s philandering and for Aretha’s celebrity. It doesn’t help that actor Ethan Henry’s portrayal of Dr. King lacks the charisma and verisimilitude of David Oyelowo’s standard-setting turn in Selma.

Yet, aside from the top-shelf quality of its sights, sounds and performances, what makes Aretha so gratifying to watch is how fully Parks delivers on the promise to illuminate Franklin’s genius. The greatest challenge is in depicting a person whose biography exemplifies struggles endemic to being Black and female in the mid-20th century without underselling the unique intellect and force of will that made her a legend. Scenes set in the storied FAME Studios in Muscle Shoals, Ala., reveal a woman with infallible insight, whose clarity of artistic vision can be intimidating to her collaborators.

Parks seems aware of her opportunity to critique the historical record—and she does so, in part, by openly addressing it. A standout episode lingers on Aretha’s encounter with a white, male reporter who profiles her for, it turns out, an actual 1968 TIME cover story. On the show, the media-wary singer presents a sanitized version of her life, complete with a dinner party to showcase her big, supposedly happy family. But when the issue appeared, the piece reported on the abuse from Aretha’s ex-husband Ted White (Malcolm Barrett) and claimed that she often spent her days sleeping, smoking and “snacking compulsively,” the kind of thoughtless racial and gendered stereotypes that were all too common during that era.

Nothing could’ve been further from the fairy-tale princess image she wanted to project. What was missing–and remains missing from so many other renderings of exceptional women and people of color–was an understanding of the subject’s agency within her life and art. Though it sometimes veers closer to Grimm than to Disney, Genius gives the Queen of Soul the regal treatment she deserves. 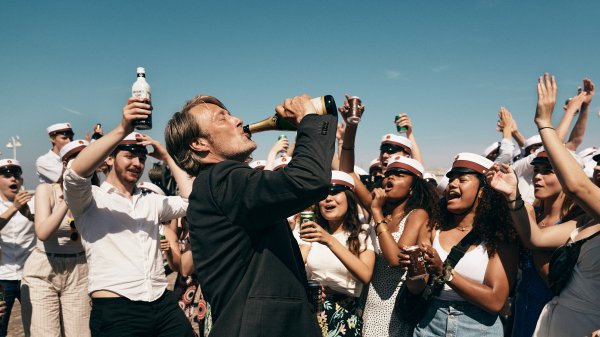 Mads Mikkelsen Can Do Anything. But He's Stuck in the Boring Oscar-Nominated Another Round
Next Up: Editor's Pick