Dating Narcissism: Why We Look for Ourselves in a Partner

When How I Met Your Mother wrapped up last week, fans were delighted to find out that the mother of Ted’s children was his soul mate. Why? Because she was just like Ted: they shared the same dorky interests, a similar sense of humor and a taste in yellow umbrellas. They even shared the same initials! And many complained when (spoiler alert) in the final minutes of the episode, Ted decides to court Robin, a character who in many ways is Ted’s opposite.

In the search for a partner, we struggle to determine who’s our best match. Is it someone who complements us?—the guy who’s calm when you’re emotional; the girl who’s organized when you’re messy? Or is it someone who looks, thinks and acts like us? Do opposites attract or do they “attract and then attack” as eHarmony advertises?

The attributes of the person who “completes” us has befuddled singles for centuries: In Plato’s Symposium, a philosopher asserts that humans began as androgynous creatures with both male and female parts. The gods split each creature in half, separating one being into man and woman. The result? We now spend our lives looking for our soulmate, the one who makes us whole—though it’s unclear whether that other half is just like us or the yin to our yang.

But Plato didn’t have the luxury of examining data from dating sites. An analysis of eHarmony users by FiveThirtyEight.com this week found that while 86 percent of people say they want someone who “complements” them (as opposed to someone who “resembles them”), women and men are much more likely to message those who are similar to them not only in terms of age, attractiveness, education, race and income, but also in terms of less obvious traits like intelligence, creativity and humor. And then there’s the Boyfriend Twin Tumblr that recently surfaced, featuring gay couples that look almost identical running under the headline, “What’s sexier than dating yourself?” A similar Siblings Or Dating? website features straight, gay and lesbian couples who look like they could be related.

Both of these blogs tap that impulse to be with someone who echoes your own personality and looks. That urge is called homogamy, a marriage between two individuals who are extremely similar. For decades, we’ve been becoming more homogamous in terms of education, income, religion and even looks. A Slate article on the Boyfriend Twin Tumblr cites a study that shows people are attracted to versions of themselves: researchers at the University of Illinois at Urbana-Champaign altered their subjects’ faces into those of strangers and asked them to evaluate the strangers’ attractiveness. Subjects favored faces that looked like their own. Another study found that people are even more attracted to those who share superficial traits like letters in their names and birthdays with them.

Social scientists are already anxious about the amount of time we spend thinking about and looking at ourselves, what with the hours we spend advertising our thoughts and activities on social networks and the rise of the selfie. Now it looks like we’re dating ourselves too. It smacks of narcissism — and remember what happened to Narcissus, who was so entranced with his own reflection in a pool of water that he couldn’t move and eventually was transformed into a flower.

But there may be hope for us narcissists yet. Biologically speaking, we’re built to be attracted to people who are dissimilar to us. A famous 1995 study that asked women to smell the sweaty t-shirts of men found that women preferred the smells of those who were genetically dissimilar to them. (Though notably this wasn’t true for women on the pill.) Scientifically speaking, opposites really do attract. Experts have a clear explanation for our tendency towards genetic diversity: our bodies are trying to prevent us from inbreeding. Plus, parents with more diverse MHC genes birth offspring with better immune system.

This genetic diversity impulse cannot apply to gay couples where reproduction is taken out of the equation. And yet data suggests that gay and lesbian couples, too, prefer diversity in their partners. Though Boyfriend Twin may be a fun Tumblr, research shows that gay couples are actually a lot less likely to be homogamous than straight couples.

So in the end which dating impulse wins out? Our narcissistic tendencies, or the quest to diversify our gene pool?

It turns out there may be no universal truth. An October study from Rutgers University found that a specific balance of chemicals affects what type of person each individual is attracted to. People with active dopamine levels (impulsive, curious types) or high serotonin levels (social, conscientious types) tended to like people similar to themselves. But men with high testosterone tended to be drawn to women with high estrogen and oxytocin levels (and vice versa). So who you fall for all boils down to how the chemicals are distributed in your brain. 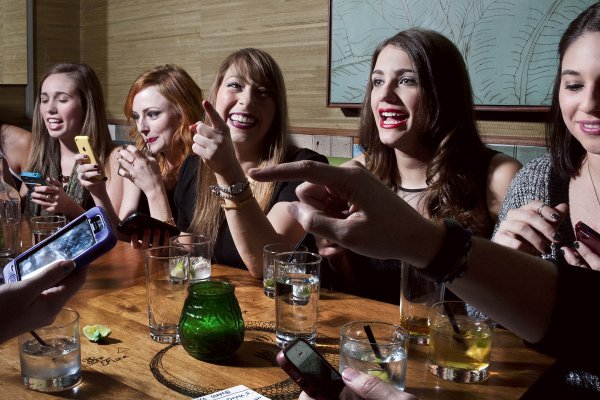 The New Dating Game
Next Up: Editor's Pick