We are finally, it seems, in the home stretch of a long pandemic—one that has been especially hard on parents of young children. While juggling work (or job hunting) and childcare, they’ve struggled to acclimate little kids to Zoom school, explain a lethal virus in terms appropriate for G-rated movie audiences and manage the frustrations of life without playgroups or birthday blowouts or hugs from grandparents. Many of the parents I know have clung to two precious forms of distraction: family cooking projects and children’s entertainment that is actually good.

In that sense, Waffles + Mochi, an adorable kids’ show about food from the Obamas’ Higher Ground Productions that hits Netflix on March 16, feels like a perfect way to pass the seemingly interminable final weeks of lockdown. But neither the timeliness of its debut nor the prestige of its producers is what makes this an instant classic of children’s television; the magic is all in the imaginative, endlessly flexible premise and its outstanding execution. Just one season in, it’s not an exaggeration to call Waffles the Sesame Street of food TV, or Salt, Fat, Acid, Heat Jr.

The story begins in the freezer-burned tundra that is The Land of Frozen Food, where aspiring chefs Waffles—a Muppet-y creature who’s apparently what you get when you cross a yeti with a box of toaster waffles—and her tiny, Beaker-like buddy Mochi watch Julia Child on TV as they run culinary experiments that always yield the same product: ice cubes. One day, the friends hitch a ride to our world on a grocery truck (yes, of course there is a “let’s blow this Popsicle stand” joke) and end up in a cheerful city supermarket owned by one Michelle Obama. Ensconced in the store’s rooftop garden, Mrs. O, as she’s called, gets the puppets started on a series of episode-long quests to learn about different foods, from tomatoes to eggs to pickles.

These are global adventures, thanks to a magical shopping cart that’s eager to transport Waffles and Mochi to relevant destinations and hook them up with people who can help them learn. The characters meet food producers, like Indigenous salt harvesters in Peru, and cook with famous chefs from José Andrés to Salt, Fat, Acid, Heat’s own Samin Nosrat. An episode on rice—which casts Common as the host of a Finding Your Roots type program that, adorably, uncovers that Mochi is partly descended from the grain—makes stops to mold onigiri with a father-toddler team in Japan and trace how rice connects West Africa to the early United States through the lineage of culinary historian Michael W. Twitty, whose enslaved ancestors were originally from Sierra Leone. Despite its overwhelmingly buoyant mood, Waffles doesn’t sidestep tough subjects. Twitty describes a woman, several branches up his family tree, who “was separated from her family and her home and had to work, by force, for free.” Another episode touches on refugees.

The show’s approach is just as diverse as its cast and destinations, mixing live action, puppetry, stop-motion and various other forms of animation to create a homemade vibe that complements its cook-it-yourself ethos and avoids the uncanny-valley energy of so much contemporary, computer-animated kids’ TV. Its visuals aren’t just vibrant; they’re thoughtful in helping young children understand new concepts. When the seasonings aisle suddenly gets cleared out, in an episode on herbs and spices, the store backdrop fades to black and white in an illustration of how those ingredients give dishes “color.” John Early and Kate Berlant, who also appear together on Search Party, voice tastebuds who do for flavors what Inside Out did for feelings. Real kids are everywhere—cooking, eating and talking excitedly about food. Original songs written by Kate Micucci and Riki Lindhome (of comedy-folk duo Garfunkel and Oates) and performed by big-name guest stars are a riot, from Sia lending her pipes to a tomato in a two-toned Sia wig to Jack Black belting out an ’80s dance-pop ode to the versatility of eggs.

Engaging, illuminating, curious and effortlessly inclusive, light but not glib or cloying, educational without being pedantic, made for tots yet clever and stimulating enough for adults to enjoy alongside them, Waffles + Mochi might be the first great kids’ show of the decade (if also one that, in a sign of lean times for public television, only a platform as deep-pocketed as Netflix could afford to execute). Whether your family binges through it or savors each episode, maybe in tandem with a weekly cooking project, it’s sure to liven up your pre-vaccination existence with not just distraction but delight. 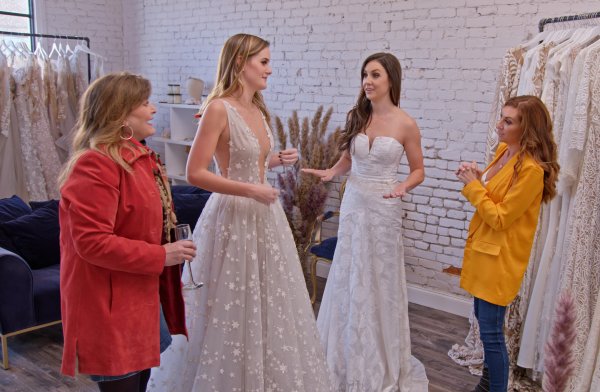 Netflix’s Marriage or Mortgage Dances Around the Dark Reality of Americans’ Finances
Next Up: Editor's Pick