Jair Bolsonaro is trying to shed his image as a “coronavirus denier”. Brazil’s far right president has spent the past year dismissing COVID-19 as “a little flu”, and railing against lockdowns. As recently as Mar. 4 he told Brazilians to “stop whining” about the country’s deaths from the virus, which have surpassed 270,000 – the second highest toll in the world after the U.S. Bolsonaro has dismissed offers from vaccine manufacturers to buy millions of doses, said he wouldn’t get a shot himself, and joked that Pfizer’s vaccine may “turn people into crocodiles.”

On Wednesday, though, the president struck a different tone. At a somber press conference in Brasilia, the first event where he has worn a mask in more than a month, Bolsonaro signed into law three new measures designed to speed up the purchase of vaccines. A week earlier, his government announced it was in advanced talks to purchase vaccine doses from Pfizer and Johnson & Johnson. “We are working and have been working tirelessly since the beginning in the fight against the pandemic,” he said. “We are an example to the world.”

The recasting of Bolsonaro’s COVID-19 credentials continued online, where his politician son shared a dignified photo of his father on Wednesday night with the quote “The vaccine is our weapon” – prompting ridicule from critics. On Facebook, the president did live streams touting his vaccination records and shared regular updates from a delegation he has sent on a “Mission to Israel” to learn about an untested nasal spray to treat the disease.

His new approach came as the number of people dying from COVID-19 deaths each day reached record-breaking levels, in part driven by the spread of a more transmissible variant of the virus, with an unprecedented 2,233 deaths recorded on Thursday.

But analysts say it is politics, not the growing death toll, that is driving Bolsonaro’s attempt to rebrand his pandemic leadership. Growing pressure from Brazil’s business community to act over the last few months was bolstered this week by the return of a major political rival to the national stage. On Monday, former president Luiz Inácio Lula da Silva – the popular leftist who was excluded from the 2018 election because of corruption charges – had his name cleared by Brazil’s supreme court, freeing him to run against Bolsonaro in 2022. He used his first speech after the verdict to condemn Bolsonaro’s handling of the pandemic. “Do not follow a single one of the president or health minister’s moronic decisions. Get vaccinated,” he told Brazilians on Wednesday.

Lula’s return and other sources of political pressure have changed the calculation for Bolsonaro when it comes to COVID-19, says Gustavo Ribeiro, founder of political news site The Brazilian Report. While the president has not admitted any mistakes or embraced social distancing, his change of heart could have transformative effects for Brazil — if it continues. “When we’re talking about Bolsonaro everything must come into conditional for him because he shifts and changes at every turn,” Ribeiro says. “But Lula could force him to actually act as the head of state and tackle the pandemic.”

Very bad. COVID-19 has never been brought fully under control in Brazil, but transmission is now at an all time high, and in on Mar. 5 Brazil accounted for 30% of new daily cases globally. Even though state and local governments have imposed social distancing and lockdowns across much of the country, many say the president’s criticism of such restrictions has fostered resistance to them from his supporters.

The wide spread of COVID-19 across Brazil has allowed the virus to mutate and led to the emergence of new, more immune-resistant and infectious strains, including the P1 variant which was first reported in the Amazonian city of Manaus in late 2020. Scientists say P1 is twice as infectious as earlier strains of the virus and it seems to be better at evading immune response, meaning that antibodies developed by people who caught earlier versions of COVID-19 are less effective against the new strain. Vaccine makers are testing the efficacy of their shots against P1. Lab tests show the Pfizer-BioNTech and Oxford University/Astra Zeneca vaccines are effective against it. Scientists at Brazilian research institute Fiocruz said March 4 that “variants of concern”, including P1, have become dominant in six of eight states they studied.

How is Brazil’s vaccination campaign going?

Just over 4% of Brazil’s 210 million people have received their first shot of the vaccine. While that rate is not much lower than in most Western European nations, it’s frustrating for many in a country that has a long established and world renowned immunization infrastructure. The director of Brazil’s regulatory agency said in February that if the health service had enough supplies, it would be able to vaccinate 60 million Brazilians a month.

Public health experts say that the limited supply of vaccines that Brazil does have was achieved in spite of, not because of, Bolsonaro’s administration. Brazilian research centers Fiocruz and the Butantan Institute partnered respectively with AstraZeneca/Oxford University and Chinese manufacturer Sinovac to produce supplies of their vaccines in Brazil. But the federal government offered almost no funding or support for those efforts, according to Fernando Aith, a public health professor at the University of Sao Paulo. The government only stepped up its investment in the Fiocruz efforts towards the end of 2020, after São Paulo state governor João Doria, a Bolsonaro rival, touted his state’s investment in the Butantan efforts.

“Until very recently, the Brazilian government’s attitude to vaccines was: they aren’t my problem, people don’t need them,” Aith says. “They made no effort to produce vaccines internally or to identify the producers on the international market and buy them. Not only did they not make proactive efforts, they also refused offers to buy vaccines.” According to Pfizer, Brazil rejected its offer to sell Brazil 70 million doses of its vaccine in August 2020.

Adding to the headaches for the vaccine rollout, analysts say Brazil’s current health minister–a military general who was given the role after one of his predecessors was fired and another resigned last spring over disagreements with Bolsonaro– doesn’t have the expertise needed to lead an effective mass immunization campaign across Brazil’s massive territory. Meanwhile, Brazilian media reports growing anti-vaccine sentiment among the population, which has previously been rare in Brazil.

People walk in front of a banner that reads 'Brazil in the ICU, BolsoOverpriced' in reference to Brazilian president Jair Bolsonaro and the high prices of basic goods during the outbreak of COVID-19 in Sao Paulo, Brazil March 9, 2021.
Cris Faga –NurPhoto/Getty Images

What has changed in Bolsonaro’s vaccine strategy?

After months of delays in talks with vaccine manufacturers, in part over Bolsonaro’s criticism of the terms of supply contracts, in early March the government announced it intended to purchase 100 million doses of Pfizer’s vaccine, 38 million of Johnson & Johnson and 13 million of Moderna’s. According to Bloomberg, the contracts have yet to be signed.

“Now we’re starting to see movement. But these efforts are obviously very late and they’re not going to solve the problems that Brazil has in the short term,” Aith says. He adds that even with all the doses that the government claims to have secured, and if all goes well, Brazil will still only have enough doses to vaccinate 50% of its population by the end of 2021.

Aith says one of the laws approved on Wednesday, allowing states and private companies to buy vaccines, will actually hurt the vaccination campaign by driving up competition and prices for the shots, allowing Brazil’s deep social and regional inequalities to dictate who gets vaccinated first. “Now that they realize we need vaccines, they are delegating responsibility for them to local governments and private companies.”

Why Is Bolsonaro warming to vaccines?

There are a few plausible reasons. Figures from Brazil’s business community, large sections of which backed Bolsonaro’s campaign in 2018, have begun to loudly voice concerns that without a vaccinated population, the economy, which shrank by 4.1% in 2020, will continue to struggle well into 2022. And, according to local media, in early March, Bolsonaro was shown a report showing his public support was falling as Brazilians watched other countries speed ahead with vaccination campaigns.

The return of Lula to the political scene is turbo-charging political concerns for the president. “The day after Lula gave his speech on the handling of the pandemic, Bolsonaro did a livestream on social media behaving in a way he’s never behaved –wearing a mask, acting reverential to the dead, stopping criticizing the vaccines, acting more responsible,” Aith says. “I put that down to Lula’s criticism.”

According to Ribeiro, the political analyst, the arrival of another political heavyweight has forced Bolsonaro to rethink his usual strategy on the pandemic. “Since he took office in 2019 Bolsonaro was essentially alone in the ring, with no real political challengers. He is a master of setting the press agenda and distracting from things he doesn’t want to talk about by saying provocative things [including] around COVID. But Lula also knows how to set the agenda.”

While he has yet to confirm if he will run in 2022, the former president’s speech struck a more conciliatory note than he has for several years, reaching out to the business community and the political center, Ribeiro says. The leftist has already received support for his pro-science start from key center-right figures. “I come from a region of Brazil where people are very resistant to Lula and voted massively for Bolsonaro. And many people now say, well you can say whatever you want about Lula but he was right about this or that,” Ribeiro says. “If Bolsonaro keeps being Bolsonaro, Lula is going to appear more and more presidential just by contrast.” 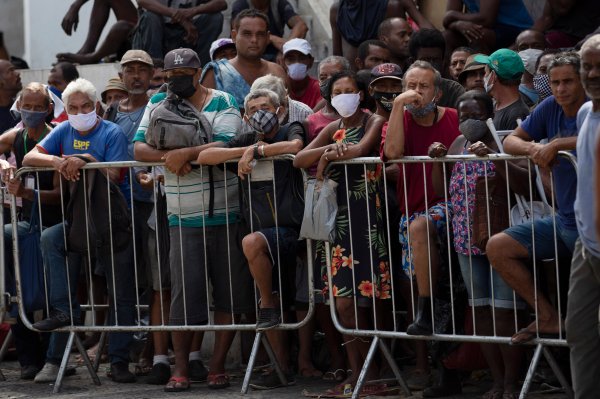