Meghan and Harry’s Interview Won’t End the Monarchy. But a Reckoning Is Coming

It was a bombshell TV interview the palace didn’t see coming. An estranged royal determined to set the record straight made sensational allegations about how she was treated by the family, especially while she was dealing with mental health issues. The institution of the royal family itself came under fierce scrutiny, and questions were raised by the media about whether the Queen’s heir would end up taking the throne.

The BBC’s interview with Princess Diana in 1995 was a milestone in the media’s relationship with the palace. Although Prince Charles had admitted to adultery in a prior television interview, this was the first time a senior royal had broken free of the conventions surrounding the palace and shone a light onto its inner workings.

Over 25 years later, the similar dynamics are again in play—something that Prince Harry acknowledged in the CBS interview with him and his wife Meghan Markle that has shaken the palace to its centuries-old foundations. “My biggest concern was history repeating itself,” he said of Meghan’s treatment by a vituperative media and an indifferent palace. “I’ve seen what happens when someone I love is commoditized to the point that they are no longer treated or seen as a real person. I lost my mother and now I watch my wife falling victim to the same powerful forces.”

The allegations this time around are even more serious than those Diana leveled against the palace a generation ago—involving the alleged racism of the family itself, with an aging monarch on the throne and a country in a moment of change. One (leftwing) British newspaper called it the “worst royal crisis in 85 years.” (In a statement released March 9, Buckingham Palace addressed the “concerning” issues surrounding race raised in the interview: “While some recollections may vary, they are taken very seriously and will be addressed by the family privately.”)

Meghan, who identifies as biracial, revealed that a member of the royal family had had “concerns and conversations” about the color of their son Archie’s skin before he was born. Just as the state of a royal couple’s relationship was off limits before Diana, so has there been an omerta between the media and the royals on the family’s complicated history with race. But now that the only person of color to join the family in generations has spoken freely about how she and her child were treated differently, the legacy of the family’s role in Britain’s colonial past and its relationship to Black, Asian and other ethnic minority citizens is coming under fresh scrutiny. At the very least the idea championed by many in the predominantly white U.K. media back in 2018 that Meghan and Harry’s union showed what a tolerant, post-racial country Britain really is has been exposed as a fiction.

This will not be a surprise to many Britons of color, whose lived experience is testimony to that fiction. But it will cement their belief that the family that is meant to symbolize this country does not represent them, and does not seek to. The damage to perceptions of the family across the countries of the Commonwealth, many in African countries and the Caribbean, may be deeper still. The hope was always that William and Harry would attract a younger and more diverse generation of supporters to the royalist cause, by showing the family’s kinder and more progressive face. That hope, always far-fetched, now seems lost entirely.

So what does this mean for the monarchy itself? Some are questioning whether the institution can possibly survive the fallout of this interview—that claims of racism at the highest levels of the family will hasten the replacement of the monarchy with a non-hereditary head of state. Yet The Firm (as the institution is nicknamed) has always proven adept at weathering scandal, from the abdication of Edward VIII to the more recent allegations of sexual abuse involving Prince Andrew (which he has denied). They are helped in this by a print media that, while noisy, is overwhelmingly committed to the survival of an institution that helps it sell newspapers. Indeed, the major middle-market tabloids are already circling their wagons around the family—as are members of the ruling Conservative party.

But the monarchy cannot afford to become standard-bearers for the forces of conservatism, especially as the U.K’s culture war intensifies. The power of Queen Elizabeth II lies in her utter rejection of politics; as the sovereign, she has positioned herself above public opinion, so that she can act as a mirror of the nation rather than a weather-vane. Meghan and Harry recognize that—indeed, in their interview they went out of their way to disabuse any notion that the Queen was to blame for their treatment.

They did not make the same exception for Harry’s father Charles, the heir to the throne and the man who—at some point in the next decade, most likely—will be charged with leading the family into the post-Elizabethan future. Make no mistake: The Queen’s death will be a moment of profound national identity crisis for the U.K. She is the tether not just between the royal institution and the country, but between a vanished era of empire and a nation in the process of remaking itself for the 21st century. When that bond breaks, we will become unmoored from so much of what we understand about ourselves.

That will be the moment of reckoning for the monarchy—and if the institution continues to find sanctuary in the bosom of the right-wing establishment, then it may not survive in its current form. Revolutions happen in times of deep uncertainty, and no power is entrenched enough to be immune from the swing of the pendulum. A future government might yet draw support from disenfranchising a fading royal family led by a tarnished, unpopular monarch.

For now, the walls surrounding the institution are too high for a single interview to bring them crashing down. But the earthworks below are quietly, imperceptibly shifting. 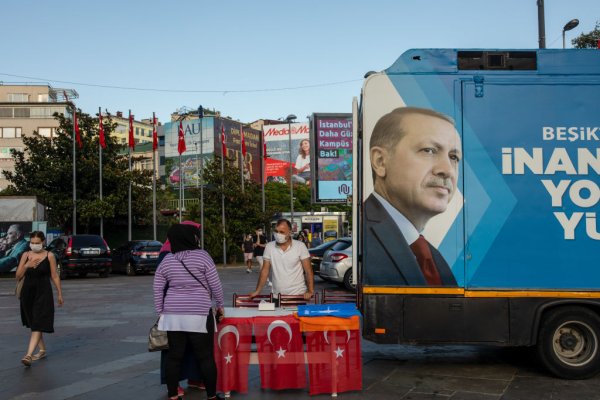 How Erdogan's Increasingly Erratic Rule in Turkey Presents a Risk to the World
Next Up: Editor's Pick