Texas Gov. Greg Abbott’s decision to lift all pandemic restrictions this week came as a shock to even his own health advisers. His critics, from California to the Oval Office, called the move reckless, and potential 2022 challenger Beto O’Rourke described it as a “death warrant for Texans.”

Call it what you like, but it may give him a way to move past the raft of negative headlines coming from his state’s disastrous handling of a winter storm that left Texas literally in the dark. For two weeks, Texas has been a focus of national attention as the cold snap rendered more than 4 million Texans without power, caused at least 70 deaths and so far cost the state economy $19 billion. The total price tag could soar to close to $300 billion, according to one estimate, making it twice as costly as Hurricanes Harvey and Katrina.

Then, earlier this week, with a flick of his gubernatorial switch, Abbott changed the story, ordering Texas’ mask mandate to be lifted and a full return to business as usual — even as scores of Texans are still without water.

“Too many Texans have been sidelined from employment opportunities. Too many small business owners have struggled to pay their bills. This must end. It is now time to open Texas 100%,” he said during a press conference on Tuesday. Lest he be accused of wagging the dog, he said in follow-up interviews that he had planned this for back in February, but delayed until the storm clean-up was underway.

The Republican governor presides over the largest Red State in the country, but it’s not been an easy second term for Abbott, as The Texas Tribune has chronicled. He faces his own intra-party disputes, with a potential 2022 primary very much a real possibility. His job-approval rating with Republicans has gone from 88% in April of last year to 79% last month, according to the University of Texas poll. The same poll in February found just 71% of Republicans approve of how he’s handled the COVID-19 response, down from 86% last April. The state GOP chairman, former Florida Rep. Allen West, hasn’t been shy in criticizing or trolling his fellow Republican.

None of this was helped by Texas’ lack of preparedness for the polar vortex that hit the state last month, or Abbott’s early scapegoating of renewable energy and a vague environmental policy known as the Green New Deal for the ensuing blackout.

Now, Abbott is bringing a new attraction under the tent of the circus that is Texas politics: a fully opened state without a requirement for masks, and with businesses packed with customers shoulder to shoulder as if the pandemic were over. Private businesses are already following suit; the state’s largest retailer, H-E-B, quickly announced it was dropping its own mask mandate in stores.

During the last year, pandemic precautions became a new addition to the nation’s deepening culture war. Masks became political statements, with conservatives refusing to wear them and denying the science that they are second only to the vaccine in stopping the spread of the coronavirus. The burden of putting some cloth over your face triggers an emotional response in some that borders rage, and that rage is a potent force — so potent it may help Texans forget that decades of deregulation delivered a catastrophic blackout.

Abbott isn’t the first Republican to understand — and harness — the culture war’s power. Mitt Romney, as a 2012 candidate, lurched in a “severely conservative” way to win the party’s nomination that year. Republicans in 2004 put a question about same-sex marriage on the ballot in 11 states to drive up turnout in rural and suburban communities to help George W. Bush win a second term. Bush won his first by promising to restore dignity to the White House after Bill Clinton’s affair with an intern.

Of course, the most recent master of this move was Donald Trump, who, as a former President and as a candidate, never met a problem that he couldn’t dodge by tossing a beehive into the culture war. The never-ending litany of grievances, affronts and bombast helped Trump turn so many corners that the history of his time in politics looks like a maze. He picked a fight with the Pope, brought Bill Clinton’s accusers to a debate, promised to purge school curricula that took a critical lens to history, and did everything in his power to give conservatives validation for their complaints. Creating near-constant instability kept Trump on solid footing.

Abbott, it appears, is picking up that playbook and trying for his own second wind. His own health advisers told The Dallas Morning News that they hadn’t weighed in on the announcement. The science isn’t behind Abbott’s decision to make Texas the most populous state without a mask mandate. It may feel like things are moving back to normal, but the facts don’t back it up. More than 44,000 Texans have died of COVID-19. Texas is still in the top 10 when it comes to new infections per capita. It has the highest number of cases on college campuses. There are still 7,200 new cases in the state per day, a number that is growing. And it has one of the lowest rates of vaccination in the country.

Despite all of this, Abbott resolutely opened the door for everyone to go back to normal, sending local officials scrambling to impose their own new limits. There’s now an open fight between Austin and communities — and it has already bumped the state’s energy woes to the back burner. Nothing cures a political problem like finding a new villain, and Abbott is busy setting up local officials as big-government nannies. Never mind that the most important part of a nanny’s job is keeping the kids alive. 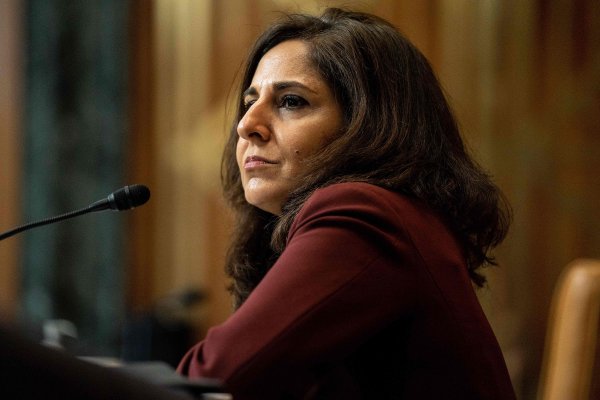 Snarky Tweets Shouldn’t Override Smarts. But They Did for Neera Tanden
Next Up: Editor's Pick