Here's Why the U.S. Didn't Sanction Mohammed bin Salman for His Role in the Jamal Khashoggi Killing

In this June 29, 2019 photo, Saudi Arabia's Crown Prince Mohammed bin Salman listens during his meeting with President Donald Trump on the sidelines of the G-20 summit in Osaka, Japan
Susan Walsh—AP
By Kimberly Dozier and W.J. Hennigan

In newly declassified detail, the world can now read why the CIA believes Saudi Crown Prince Mohammed bin Salman dispatched the 15-man hit squad that killed and dismembered Washington Post journalist Jamal Khashoggi in 2018. MBS, as the prince is known, “viewed Khashoggi as a threat to the Kingdom,” the report asserts, and “broadly supported using violent measures if necessary to silence him.” The plot, which saw Khashoggi lured to his death at the Saudi consulate in Istanbul, turned MBS from a figure many hoped would modernize Saudi Arabia into an international pariah.

But public shaming is where President Joe Biden’s campaign pledge to hold MBS–who denies ordering Khashoggi’s murder–accountable appears to end. On Feb. 26, his Administration announced new sanctions and travel restrictions for dozens of MBS’s alleged henchmen, but punishment of the 35-year-old de facto ruler is limited to bruising his ego. U.S. officials say they won’t be inviting him to visit anytime soon, and Biden isn’t taking his calls, communicating instead with his father, 85-year-old King Salman bin Abdulaziz Al Saud. (MBS will have to make do with conversing with the Pentagon chief.)

The slap on the wrist sparked immediate criticism in Washington from lawmakers and human-rights activists who want to see MBS charged–or even, somehow, ousted from power–for the killing. But the Biden Administration has evidently calculated it has too much at stake to alienate Riyadh; State Department spokesman Ned Price described the diplomatic slights “not as a rupture, but as a recalibration.”

Saudi Arabia is central to ongoing U.S. efforts to offset Iran’s expansionist ambitions in the Middle East, to continue to strengthen ties between Israel and the Arab world, and to help Washington fight the violent extremism Riyadh’s fundamentalist clerics have been accused of helping foster. The nation hosts key U.S. military and intelligence posts, and buys billions in U.S. military equipment, even after a recent Biden ban on offensive weapons sales to the country to stop MBS’s increasingly bloody campaign in Yemen. “Militarily speaking, we have obligations there in Saudi Arabia, and we’re going to continue to meet those,” Pentagon spokesman John Kirby told reporters. Indeed, Saudi news agencies reported that Saudi and U.S. troops began a joint training exercise just two days after the Khashoggi report’s release.

Biden officials hope the diplomatic snubs are just enough to distinguish Biden from Donald Trump’s coddling of the kingdom–and to keep MBS from lashing out at other journalists and dissidents. Saudi analyst Ali Shihabi says the rising royal does feel insulted, and could turn to Beijing both to hedge his bets and to salve his battered pride if he continues to come under attack from Washington. “But if this is put behind us, he will forget about it,” Shihabi says. Biden’s team appears to have calculated that most Americans, coping with COVID-19’s chaos at home, have already done just that. 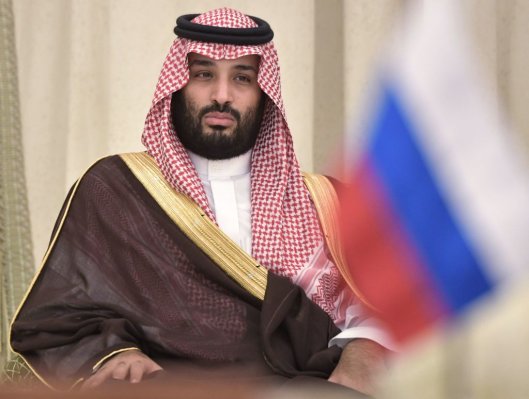