The United States vs. Billie Holiday Is a Messy But Passionate Tribute to an American Legend

Almost everyone has feelings about Billie Holiday, many of them strong. But no one can own her, and if there’s any supreme conclusion to be drawn from Lee Daniels’ disorganized but passionate drama The United States vs. Billie Holiday, it’s that. Daniels’ movie focuses on an underexplored angle of Holiday’s life, one that dovetails with all the things we know about her: Holiday had a traumatic childhood—she was raped at age 10. She was repeatedly attracted to controlling, abusive men. Her emotional vulnerability spurred a heroin habit she couldn’t kick. But her personal problems were intensified by a force determined to crush her, specifically the Federal Bureau of Narcotics, which pursued her with an obsessive vengeance that surely hastened her death, in 1959 at age 44. Holiday’s drug use wasn’t even the agency’s main problem with her: what truly infuriated them was her refusal to stop performing one of her signature numbers, “Strange Fruit,” a protest song—written by Abel Meeropol—whose lyrics evoked, with graphic if poetic detail, the horror of lynching. As one character says in the film, the song’s lyrics “provoke people in the wrong way.” “Strange Fruit” was deemed un-American, and the woman who gave it such potent life onstage and on record became an enemy of the state.

With that focus, The United States vs. Billie Holiday—written by playwright Suzan-Lori Parks and drawn from journalist Johann Hari’s book Chasing the Scream, a study of the U.S. government’s war on drugs—reframes much of what we know about Holiday, stressing her defiance rather than fixating on her personal miseries (however real, and crushing, they might have been). The movie’s chief energy source is Andra Day, as Holiday: the story takes place mainly in the final 10 years of Holiday’s life, and Day captures the singer’s high and low moments, public and private, in a way that feels vital and lived-in.

Holiday’s chief nemesis was Harry Anslinger (here played by Garrett Hedlund), the commissioner of the Federal Bureau of Narcotics and an outright racist. (Anslinger’s long, vicious reign began in 1930, during Prohibition, and didn’t end until 1962.) The commissioner knew he couldn’t send white agents into Harlem. So he recruited a young Black man just out of the service, a polite, handsome charmer named Jimmy Fletcher (Moonlight‘s Trevante Rhodes) to trawl the clubs, and to infiltrate Holiday’s inner circle specifically. Jimmy starts coming around, at first still wearing his uniform, sometimes bearing flowers or an album for Holiday to sign. Holiday, not yet knowing he’s working for the feds, takes a liking to him; in her kittenish purr, she calls him “soldier boy.”

Jimmy is part of the gang that busts her for narcotics possession, but the story of their complex friendship doesn’t stop there. Like many (though not all) of the figures in The United States vs. Billie Holiday, Jimmy Fletcher was a real person, an agent exploited by the government for his “usefulness” as a Black man. Later in his life, Fletcher expressed regret for what he did to Holiday, and their relationship—presented here as a romantic one—is one of the most intriguing and potent angles of The United States vs. Billie Holiday. The scene in which Jimmy and his cohorts burst in on Billie to arrest her—she would later be convicted, serving a sentence of one year and one day—is especially charged: she faces him squarely, as if to impress upon him the depth of his betrayal, and strips out of her ‘40s-style satin undergarments to stand naked before him. Her bare skin, rather than making her seem vulnerable, becomes a kind of armor.

The United States vs. Billie Holiday is a complex and sprawling film, with a sometimes confusing chronology; it can be hard to know exactly when certain events are taking place, and the effect is disorienting. But if Daniels’ films aren’t always neat, tidy affairs—a criticism you could easily lodge against the jarringly provocative The Paper Boy, as well as the grandly titled Lee Daniels’ The Butler—they always feel wholly alive. The United States vs. Billie Holiday may be at times unfocused, but it’s never boring. And as always, Daniels rounds up the finest performers and gives them great characters to dig into: Here, Da’Vine Joy Randolph and Miss Lawrence play two of Holiday’s closest friends, confidants who travel with her and protect her—both are terrific. Rob Morgan, always superb, plays Louis McKay, possibly Holiday’s most heinous husband. (She was married three times.) And Rhodes hints at Jimmy Fletcher’s conflicted soul with the quietest of gestures. Jimmy is a man locked away from his own feelings, unsure how to free himself. Rhodes’ performance suggests that Fletcher, so convinced he was doing the right thing for the sake of his country, actually defiled everything his nation stands for by betraying Holiday. She was really the only America worth fighting for.

Day’s performance makes you believe that. She captures Holiday’s regal bearing, intensified by the elegant gowns the singer favored when performing. (The costumes here, by Paolo Nieddu, are a wonder to behold.) Holiday’s beauty and her carriage—even the boldness of the gardenia she fastened to her glamorously coiffed hair—are important in the telling of her story: her poise only made the feds—and racist white people everywhere—angrier. But if she was graceful and gorgeous, she could also be bold and bawdy. She swore freely and frequently. She loved her dogs, big and small. (Her famous boxer, Mister, is well represented in The United States vs. Billie Holiday.) And most significantly, Holiday’s vocal powers were broad and deep enough to hold everything, from the bittersweet joy of a pink sunrise to the soft-as-sable disquiet of a too-late night. For many of us, her voice isn’t just a casual listening pleasure; it’s a living spirit that we make a home for in our very souls. When Billie sings in The United States vs. Billie Holiday, it’s Day’s silky-supple voice we hear. She sounds like Holiday, but what she’s offering is less an act of mimicry than an intimate incantation, a spell of protectiveness. This movie is a fortress of dignity for a woman who, even as she suffered, refused to let herself be degraded. She was a world unto herself. No wonder her country sought to destroy her. 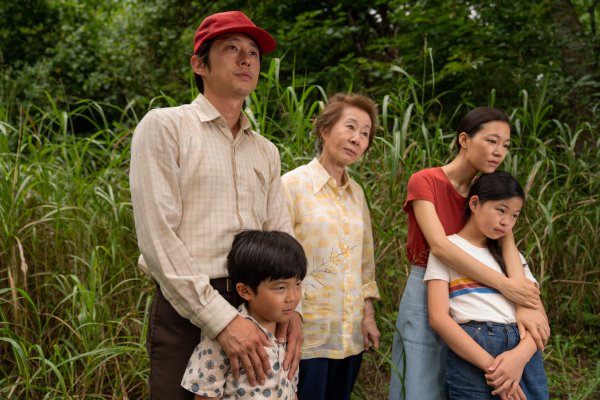 In Minari, a Family Finds Home in the Heartland
Next Up: Editor's Pick