South African athlete Caster Semenya is bringing her legal fight to participate in women’s sports to the European Court of Human Rights (ECHR), her latest bid to “put an end to the longstanding human rights violations by World Athletics against women athletes.” The lawsuit from the two-time Olympic champion challenges restrictions on testosterone levels in female athletes that prevents certain women from participating in international sports competitions.

In a tweet Thursday morning, Semenya shared a press release from her lawyers, Norton Rose Fulbright, which said “Semenya’s ongoing fight for dignity, equality, and the human rights of women in sport took a crucial step forward with the filing of an application” to the ECHR.

The lawsuit asks that the Strasbourg court find that “Switzerland has failed in its positive obligations to protect her against the violation of her rights.” In September 2020, Semenya lost her long-running legal battle at Switzerland’s Supreme Court, preventing her from competing at the Tokyo Olympics unless she agrees to medical interventions to lower her testosterone. She had appealed against a 2019 ruling by the Court of Arbitration for Sport based in Switzerland that upheld 2018 rules from the international athletics governing body World Athletics that prohibit some female runners with naturally higher levels of testosterone from participating in international women’s sports competitions.

Read More: Caster Semenya Won’t Stop Fighting for Her Right to Run, Just as She Is

Such regulations involve “sex testing” for women’s participation in sport, which violates several internationally protected human rights including rights to privacy, dignity health and non-discrimination, according to a December 2020 report by Human Rights Watch. The report called World Athletics’ sex-testing regulations “inherently subjective and degrading,” and highlighted that the testosterone levels used to rule out certain women from participating in sports fall “within an arbitrary and largely unscientific range.” HRW said the regulation has been used to police the bodies of women athletes with higher testosterone levels, forcing medical interventions upon them to lower levels of the hormone so they could keep competing, and has also disproportionately affected women from the Global South.

In a June 2020 report, which highlighted Semenya’s case, the U.N. called for sporting bodies to “review, revise and revoke” eligibility rules and regulations that have negative effects on athletes’ rights.

“I hope the European court will put an end to the longstanding human rights violations by World Athletics against women athletes,” Semenya said in the statement released Thursday. “All we ask is to be allowed to run free, for once and for all, as the strong and fearless women we are and always have been.” 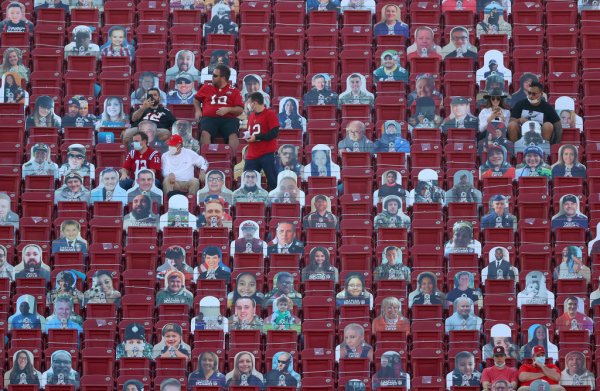 Why the Pandemic Super Bowl Was Rough To Watch
Next Up: Editor's Pick