'I Am Not the President's Lawyer.' Merrick Garland Vows Independence as Attorney General

U.S. Attorney General nominee Merrick Garland assured Congress on Monday that he would remain independent of partisan influences if he is confirmed to the post.

Garland, one of President Joe Biden’s highest-profile nominees, would oversee a wide-reaching department that has a hand in everything from the prosecution of rioters who stormed the Capitol on Jan. 6 to the nation’s broken immigration system. He’s set to take over the Department at a particularly fraught moment, with a crisis in confidence about the DOJ’s impartiality spurred by Donald Trump’s presidency and numerous hot-button political investigations underway, including one into the financial dealings of Biden’s son Hunter and another into the origins of the Trump-Russia probe. How Garland navigates the tricky partisan environment could have huge consequences for public faith in the Department.

On his first day of hearings before the Senate Judiciary Committee, Garland navigated questions that reflected the breadth of his potential purview as attorney general and the danger of becoming viewed as too political.

“I do not regard myself as anything other than the lawyer for the people of the United States. I am not the President’s lawyer. I am the United States’ lawyer,” Garland said, in response to a question from Senator Ted Cruz of Texas about whether Garland would be Biden’s “wingman.”

So far, many of the Biden Administration’s efforts have been aimed at returning the country to a state of stability. This follows a wildly chaotic Trump Administration and several scandals surrounding his attorneys general, Jeff Sessions and Bill Barr, including the zero-tolerance policy that wrenched migrant children from their parents and the use of military force upon peaceful racial justice protesters just before Trump attended a nearby photo-op.

To that end, Garland gave careful answers that aligned with the Biden Administration’s aims to insulate the attorney general from political pressures. He noted he did not expect to have conversations with donors. He emphasized that anyone with conflicts of interest would not be involved in related investigations. And when asked whether he would commit to keeping Special Counsel John Durham—who is investigating the origins of the Trump-Russia probe—in his role, Garland would go only so far as to say that while he had no doubt the decision to keep Durham in place was the “right decision,” he needed more information.

“I’m telling you what I think an attorney general ought to do, which is to look at the facts before making a decision,” Garland said. “I’m also telling you I will never make a decision in the department based on politics or on partisanship. So whatever decision I were to make, it would not be based on that.”

On multiple occasions, Garland cited public and private commitments from Biden that as attorney general, Garland would remain independent of political pressure. It was a reason he said he was convinced to accept the position, leaving behind a lifetime appointment as a federal appeals court judge. He also explained that he saw his role as defending Department of Justice employees from pressure that could interfere with their jobs.

At one point, when asked by a Republican Senator whether he would resign if he were asked to do something illegal or unethical, Garland said he would, if his advice that an action was illegal went ignored. “I do not expect this to happen with this President, who has made it completely clear, publicly and in private, that he will not do that,” Garland said.

What Garland did not bring up as he took care to put distance between himself and partisan politics was his prior nomination to the Supreme Court. In 2016, when Garland was nominated to the Supreme Court by then-President Barack Obama to replace the late Justice Antonin Scalia, GOP Senators refused to hold hearings to consider him, and Garland was caught squarely in the middle of a bitterly partisan battle. In the end, his nomination became the victim of Republicans’ ruthless stall tactics.

Republicans’ bet paid off: Trump was elected, and he replaced Scalia with his own conservative nominee, one of three Supreme Court Justices he sat during his tenure. Iowa Senator Chuck Grassley, the ranking member of the Judiciary Committee who was chairman at the time Garland was nominated to the Supreme Court, directly addressed this in his opening comments on Monday. “I had something to do with that after the death of Justice Scalia,” Grassley said.

Some Republicans needled Garland with questions meant to elicit outrage from their supporters, including Senator Mike Lee of Utah, who accused two woman DOJ-nominees, Vanita Gupta and Kristen Clarke, of condoning “radical” positions in the past. Garland jumped to their defense, vouching for their integrity. “I have complete faith in them,” Garland said. “The buck stops with me, as Harry Truman said.”

Despite the grilling, Garland, who is widely regarded as a pragmatic moderate, is expected to win bipartisan support for his confirmation. Multiple Republican Senators indicated they thought Garland was a good fit for the job. Senator Dick Durbin of Illinois, a Democrat and chairman of the committee, told reporters Monday that a floor vote could be held on Garland’s nomination as early as next week.

In the meantime, Garland has to continue making the case that he will remain uninfluenced by politics.

“I would like for the time that I’m in the Justice Department to turn down the volume on the way in which people view the department. That the Justice Department not be the center of partisan disagreement. That we return to the days when the department does its law enforcement and criminal justice policy, and that this is viewed in a bipartisan way,” Garland said in his closing remarks on Monday. “I know these are divisive times. I’m not naive. But I would like to do everything I can to have people believe that that’s what we’re doing.” 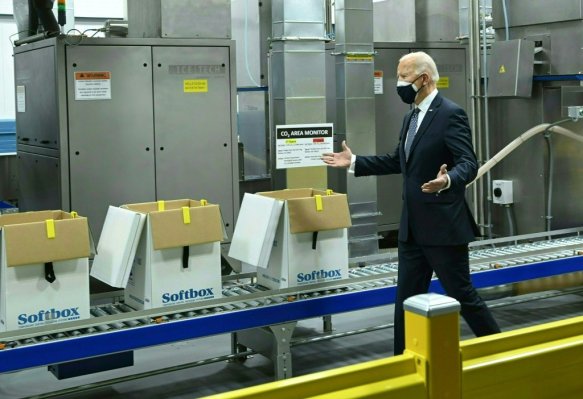 'America Is Back.' Joe Biden Tries to Turn the Page on Donald Trump
Next Up: Editor's Pick