Amid freezing temperatures, nearly half a million Texans remained without power Thursday morning after a record-breaking winter storm pummeled the state’s power grid and left millions without access to heat and electricity. Houston’s Fire Chief Samuel Peña said on Thursday that carbon monoxide poisoning is at an “all-time high” as people attempt to warm themselves with generators, gas heating devices or cars in their garage.

As Texans struggle against the bitter cold, many organizations are calling for donations to help address the crisis. Others are calling for volunteers to help distribute critical supplies and transport those in need to warming stations if they feel safe doing so.

Here are some ways to help people suffering from the Texas power outages. (This list will continue to be updated.)

Austin Mutual Aid: Austin’s mutual aid fund is raising money to help book hotel rooms—the price of which have skyrocketed in some areas—for city residents stranded without power or shelter amid freezing temperatures.

Feed The People Dallas: The Dalla-Fort Worth-based mutual aid organization is asking for both monetary donations and donations of critical supplies to help support those in need in marginalized communities. They’re also accepting volunteers if you’re nearby.

The Austin Area Urban League: The local Austin area Urban League is accepting donations to help provide shelter and critical supplies to the housing insecure in the city.

Crowdsource Rescue: Founded amid the devastation of Hurricane Harvey, this volunteer-based nonprofit helps rescue Texans during national disasters and is currently working to help transport vulnerable people to safer locations and deliver needed supplies. The group accepts donations and well as volunteers.

Austin Disaster Relief: The Austin-area network of nearly 200 churches is accepting monetary donations to help provide supplies and shelter to those in need, and is asking for volunteers to help run and transport people to 24-hour Cold Weather Shelters.

Texas Jail Project: Aiming to “empower incarcerated people in county jails by lifting their voices through stories, testimonies, and community building.,” the Texas Jail Project has received reports from detainees in county jails allegedly without power or running water and is accepting donations to help pay for detainee’s phone calls and commissary purchases.

Free Lunch: This Austin-area group works to provide meals within the city’s Esperanza’s Community and is accepting monetary donations.

The American Red Cross: The Red Cross of Central and South Texas is running shelters and warming centers across the state and accepts donations.

The Salvation Army: The religious organization is helping provide food, shelter and transportation to Texans and is asking for monetary donations as well as critical supplies like blankets and toiletries.

Episcopal Relief & Development: The relief and development agency of the Episcopal Church is helping provide shelter and resources to communities in the Houston, Waco, Austin and other areas.

Where to donate food and water

Feeding Texas: The network of Texas-based hunger relief organizations has a searchable database of local food banks you can donate to. Check to see what’s nearby.

SAFE: This Austin-area shelter that serves survivors of child abuse, sexual assault and exploitation and domestic abuse is asking for donations of drinking water, frozen pizzas, cold and hot cereal, and wipes to its Manor Road children’s shelter. It also takes monetary donations.

Lucha Dallas: This Dallas-based organization is asking for donations of winter gear including jackets, hats, gloves, scarfs, and blankets. It’s also accepting monetary donations to help pay for hotel rooms for those in need.

Front Steps: This Austin-area nonprofit is holding a drive to help provide blankets for the city’s houseless community.

Know of an organization that should be on this list? Email madeleine.carlisle@time.com. 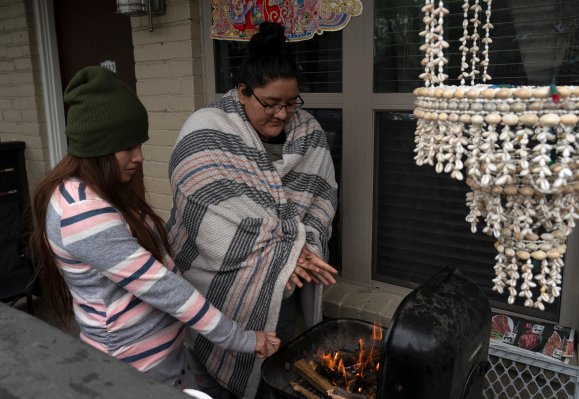 Real Impact of Widespread Texas Blackouts Remains a Mystery
Next Up: Editor's Pick