'America’s Notorious for Saying One Thing and Doing Something Else.' Albert Woodfox Talks Solitary Confinement, Social Distancing and Racial Justice

NEW ORLEANS, LOUISIANA, USA - MARCH 9, 2020 Albert Woodfox at his home in New Orleans, La. A member of the Angola 3, a group of three men who were wrongfully accused of murder, and sentenced to solitary confinement for 44 years. Woodfox was freed from prison in February, 2016.
The Washington Post via Getty Images
By Josiah Bates

Feb. 19 marks the five-year anniversary of Albert Woodfox’s release from Louisiana State Penitentiary. (It also marks his birthday.) Woodfox, 74, had spent over 40 years in solitary confinement while incarcerated there, one of the longest periods of solitary confinement periods in the history of the U.S.

During their time in the penitentiary, Woodfox, along with Robert King and Herman Wallace, joined the Black Panther Party and became activists. “We used education… to help transform ourselves from petty criminals into political activists,” Woodfox tells TIME. “The Black Panther Party played a great part in doing that. It gave me a sense of self-worth and a purpose and a direction.”

They became known as the “Angola Three“—the Louisiana State Penitentiary was also known as Angola Prison—as they worked to improve the conditions of the prison while also educating their fellow inmates and organizing protests.

Their actions caught the attention of the prison administration. In 1972, Woodfox and Wallace were charged with the murder of a fellow inmate, though there was no evidence that connected them to his death. King was convicted of a different prison murder. All three were later sent to solitary confinement.

Woodfox was released in 2016 after multiple challenges to his murder charge in court. He has since written a memoir and been involved in numerous creative projects—recently collaborating with the producer Fraser T. Smith on his album 12 Questions—as well as continuing to advocate for prison reform, criminal justice reform and basic human rights. Speaking with TIME, Woodfox discusses his activism both past and present, his experience in solitary confinement and his expectations for how the Biden administration will address criminal justice issues.

TIME: Can you talk about your experience being in solitary confinement for over forty years?

Woodfox: I was actually in solitary for forty-four years and ten months. [King, Wallace and I] made a conscious choice to fight against what solitary confinement can do to you—it can take away your sense of dignity, pride, self-respect, self-worth. It can destroy your mind, kill your hope.

I think this pandemic has helped King and I explain more what it’s like to be confined to a small area. This pandemic has forced people to quarantine and stay in their houses and cut off socialization with family and friends and pretty much just limit all [that] you can do. So it made it much easier for us now to try to make people understand what being held in solitary confinement is.

I still get requests from a lot of guys in prison to help in any way I can; for some reason what happened to us, what we went through and how we survived has resonated with other individuals who have been in lock-up. We feel a moral obligation to make society aware that these people exist, and [are] aware of the sacrifices that they have made and continue to make even now.

Even five years later, are there things about freedom that you’re still adjusting to?

Yes and no. I have considered myself to be free, mentally and philosophically, since my early forties—when I was able to define the kind of human being I wanted to be. I developed moral values and a sense of self-worth [out of] years of oppression. As complicated and as long as my life is, the results are pretty simple. [Now] I just want to be happy. I want to have the basic necessities that humanity needs to survive and given the opportunity to create happiness for myself and people in my immediate family and my extended relationship with friends.

Read more: ‘You Have One Minute Remaining.’ Why I’ll Always Drop Everything to Answer My Brother’s Calls From Prison

In the last year, much has been said about America undergoing a reckoning on racial justice. Do you see any parallels between your activism while in prison and the Black Lives Matter movement, or the response to last summer’s police killing of George Floyd?

Long before the world embraced it, I saw the similarities between the Black Lives Matter movement and the Black Panther Party. There are a lot of movements in the country right now, and they seem to be growing with influence because the level of consciousness is once again [growing].

I work with a lot of political organizations, and [King and I] made a point, wherever we went for speaking engagements, to ask the host that ran the meeting to connect us with some of the young leaders in Black Lives Matter

George Floyd’s murder touched people. People seeing a man begging for his life, and the cruelty of the police [officer] who was killing him. And the pivotal moment when he realized he was gonna die—he was trying to connect with his mom, and he was calling for his mom. That kind of thing cuts so deep and it raises people’s level of consciousness, and it takes them out of the comfort zone they live in, and makes them realize that the world is not as they’re [being told it is]. This is reality, this is what’s really going on. And we have to do something about it.

Do you think today’s forms of activism and protest are proving to be effective? Particularly the “defund the police” movement, for example.

I think that any form of activism that is against inhumanity is a good movement. It may not be a movement I would participate in, but I still acknowledge it. I don’t see it as a competition. Robert King had this saying when we’d do speaking engagements: he’d say every time somebody throws a pebble in the pond it creates a ripple.

I see any movement in society or in the world right now to make humanity better, to make society constructed in a way that treats humanity in the most dignified way. I see that as a positive step towards the goals of building a better humanity.

What are your hopes for the Biden administration and any potential progress on criminal justice issues?

I don’t have a great deal of faith in the political movements in this country right now. I voted for Joe Biden and Kamala Harris, but he wasn’t my first choice. He was the lesser of two evils; my vote was more against Donald Trump and his white supremacist administration than it was having confidence in President Biden and Vice President Kamala Harris. Right now I have a wait-and-see attitude. America’s notorious for saying one thing and doing something else; we have a very short attention span. We forgive too easily and forget too quickly.

What steps do you think should be taken to ensure that racial justice, racial equality and criminal justice issues remain at the forefront of the national conversation?

Challenge, challenge, challenge. Take a stand. Become a part of a movement, create a movement. Change is never easy. It’s a difficult process. It takes us out of our comfort zone—but it’s necessary. One of my goals is to teach humanity the importance of embracing change, rather than seeing change as the enemy. See it as an opportunity to move forward, to improve yourself, to improve humanity, to improve society.

I try to raise people’s level of consciousness—making them understand the economic and political and social institutions in this country and how they work against humanity rather than for humanity. I have four beautiful great-grandkids. And I would like to leave a society better than it is now. I would hate to see them fighting the same battles thirty years from now. So that’s what my life is about right now. That’s my purpose. 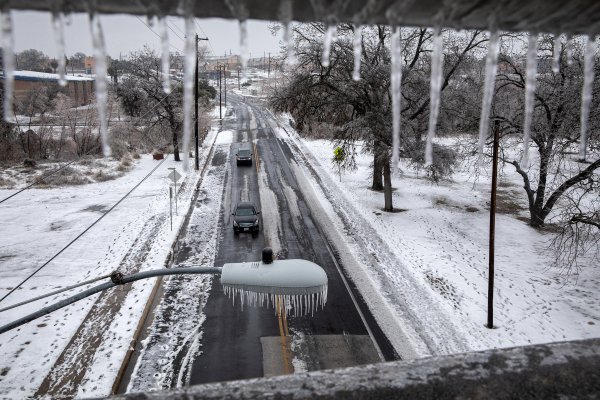 Nearly 200,000 People Still Lack Power Amid Snow, Subzero Temperatures Across Texas. Here’s How To Help
Next Up: Editor's Pick