Joe Biden and Mitch McConnell Could End Up in a Truce, Thanks to Myanmar

If you were like a lot of Washington this week, you haven’t been able to take your eyes off the broadcast of former President Donald Trump’s impeachment trial. Snap numbers show a larger audience than his first trial, now a year in the past. The video of Senators fleeing, the bravery of Capitol police trying to defend the lawmakers, and the wanton lawlessness of the thugs who overtook the building on Jan. 6 have been unmistakably compelling. Trump may be retired against his wishes down at Mar a Lago, but the chaos he created still commands the public’s attention.

Which is why, if you weren’t looking for it, you missed the news that the current President, Joe Biden, took a major step yesterday that could have longstanding ramifications for U.S. relations with its peers in Asia. In announcing an executive order against the military leaders behind a coup in Myanmar, Biden said the move was tying up $1 billion — a potentially crippling sum for the plotmasters in the country also known as Burma. Biden also demanded the military release the country’s de facto leader, Daw Aung San Suu Kyi, and other political prisoners.

“We’ll be ready to impose additional measures, and we’ll continue to work with our international partners to urge other nations to join us in these efforts,” Biden said.

For political Washington, it was barely a blip on the radar. After all, it’s tough to compete with video showing Mitt Romney on Jan. 6 running through the second-floor hallway of the Capitol, past the Ohio Clock and away from the insurrectionists. But for foreign policy Washington, it was as subtle as the Batsignal. Biden’s choice to deploy presidential prestige in defense of a fledgling democracy could be an early clue into how much Biden is willing to insert the United States in global affairs.

It’s also a sign that parts of Biden’s agenda and that of Senate Republican Leader Mitch McConnell may yet find common ground. McConnell has spent decades pushing for Myanmar’s freedom and has in the past received secret correspondence from Aung San Suu Kyi herself. McConnell visited Aung San Suu Kyi in Yangon in 2012, and she returned the courtesy later in McConnell’s home state of Kentucky. “I have never spent more time on an issue and made less difference,” McConnell has said.

Biden probably can’t restore Aung San Suu Kyi to power or to good-standing with the world community. (The Nobel Peace Prize winner fell out of favor — hard — as head of the government that oversaw the persecution of the Rohingya minority.) But he might find common cause with McConnell, the figure who is key to greasing the wheels for Biden’s agenda from trade to health care, foreign policy to the economy. In 2016, when Aung San Suu Kyi had breakfast at Biden’s then-home at the U.S. Naval Observatory, McConnell attended.

Defensive-realists like Stephen Walt have rightly noted that, practically speaking, there is very little Biden can accomplish here. The Myanmar military’s rejection of the outcome from November 2020 is pretty much the final word on who has power in the southeast Asian country. (If this has echoes of America’s concurrent experiences, congrats on passing your comparative politics course.) Myanmar’s day-to-day life doesn’t hinge on its relationship with Washington; Beijing holds the cards, thanks to its robust interest and its aggressive foreign aid program that has more than a few whiffs of Cold War clientelism in China’s very backyard. As Walt notes, there’s only a U.S. problem here if Biden creates it.

And that’s what he did. Biden announced sanctions were coming against the Myanmar leaders on Wednesday and followed up on the topic hours later during a call with Chinese President Xi Jinping, their first as the leaders of their nations.

Biden seems to be making a strong play to emphasize human rights as a tentpole of revised U.S. foreign policy away from Trump’s seeming agnosticism — or admiration, in some cases — toward autocracy. It’s a drift toward an idealized view of U.S. power and morals at a moment when America’s allies are still burning sage to rid themselves of the Trump era. By adding a potential provocation about a country on China’s border, Biden is making a calculation in posture that could shape the entire Sino-American relationship for his term.

Put another way: Biden knows China owns a 90% stake in Myanmar, but even minority shareholders can cause trouble.

Biden’s move may be folly, but it’s not shocking. During his eight years as Barack Obama’s Vice President, Biden witnessed the United States’ continued efforts to woo Beijing’s neighbors. Then-Secretary of State Hillary Clinton became the first chief diplomat since John Foster Dulles to visit Myanmar in 2011 to meet with Aung San Suu Kyi, and she joined Obama a year later when he became the first sitting U.S. President to visit the country, ostensibly to promote democracy and to keep it from sliding back into madness. Absent an outright win, Washington would be happy to inject some distrust between China’s neighbors and the superpower.

Official Washington had long adopted a fawning posture for Aung San Suu Kyi, who won the Nobel Peace Prize while imprisoned in her home in 1991. The daughter of the man who almost won then-Burma’s independence from Britain, Aung San Suu Kyi embodied so much of the West’s hope for the military state. During much of 2007, as I rode along with the late Sen. John McCain’s presidential bid in New Hampshire, we couldn’t get the gentleman from Arizona to shut up about her in the back of the bus. (She’d later be demoted in McCain’s hierarchy of freedom’s champions when Vladimir Putin invaded Mikheil Saakashvili’s Georgia.)

But Aung San Suu Kyi’s star has since faded. She is no longer held up in the same company as Nelson Mandela, Mahatma Gandhi or Václav Havel. Her appearance last year in The Hague to defend her country’s military and its systematic oppression of Rohingya Muslims pretty much made clear her moment as a human rights defender had passed.

That violence didn’t come from nowhere, however. Despite plenty of warning signs, Washington chose to be optimistic about her. In fact, then-Senate Foreign Relations Chairman Bob Corker confronted Aung San Suu Kyi about the treatment of Rohingya Muslims at a 2016 breakfast Biden hosted for her at the Naval Observatory. In a statement, he said he felt she was dismissive about it.

“After witnessing her lack of regard for Burma’s dismal track record on this issue, I plan to pay very close attention to her government’s efforts to prevent innocent human beings from being trafficked and sold into forced labor and sex slavery,” he said.

Now, the military is once again exerting control, Aung San Suu Kyi is once again detained, and Washington, from afar, is once again trying to coax this corner of Asia into democracy, as it did for decades, relying on imperfect leadership structures as the way in. You can’t miss the juxtaposition: a Senate trial at home of one leader for trying to use violence to subvert democracy, while the White House launches sanctions at other leaders abroad for the same sin. For Biden, trying to shape his reality now at home and abroad, much of his aspirations hinge on McConnell, the Republican leader who even in the minority can still bend Washington to his whims. 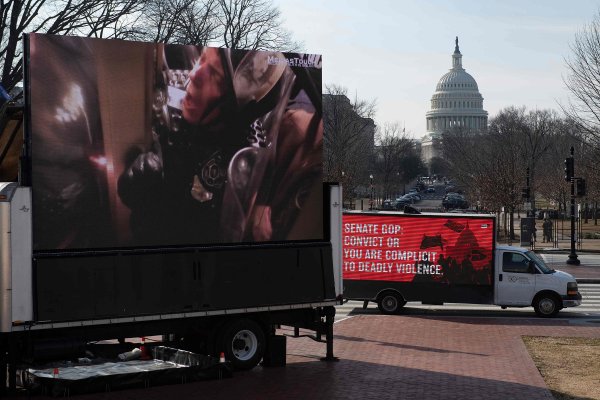 This Video of Jan. 6’s Insurrection Should Be Mandatory
Next Up: Editor's Pick