This Video of Jan. 6’s Insurrection Should Be Mandatory

It was impossible not to feel your pulse quicken as House Democrats pushed the play button on a 13-minute supercut of what transpired on Jan. 6. Barricades fell. Flagpoles became javelins. Windows shattered. Teargas wafted. Police screamed in fear and in agony. People died.

And all of it took place around the U.S. Capitol, a sacred space that right now is doubling as both a crime scene and a jury box for Trump’s second impeachment trial in the Senate. As Senators, who serve as jurors, consider whether the then-President incited the mob that overtook the Capitol, yesterday’s first day of presentations left those of us watching closely with plenty of reason to shake. Using amateur video and news footage alike, the Democratic prosecutors of the case reassembled the events of Jan. 6 with shocking effect.

The real-time coverage of that day relied — rightly — on wide shots from afar, as media became a target of the rioters’ anger. On the video, you can see The Associated Press’ logo on camera gear that had been seized. But the House managers, using footage captured by the failed insurrectionists themselves, took us inside what was happening, unfiltered. We didn’t have to imagine their vitriol. We could hear it in the reconstructed timeline — and it was more raw and frightening than many of us might have imagined.

For better or worse, so many of us in a certain cohort had our initial view of Washington colored by Aaron Sorkin’s The West Wing, an idealized version of Bill Clinton’s politics that skipped right over George W. Bush and gave us a choice between a fictionalized Barack Obama and John McCain. (For my fellow Jed Bartlet aficionados, “Crime; boy, I don’t know” does not count as an honest representation of W. and the conservative movement he represents.)

Optimism flows eternal and novel tactical choices are meant to be outdone in that Sorkin paradigm. After watching those brutal painful 13 minutes yesterday, I kept coming back to another line Sorkin wrote in his second season of this show: “It wasn’t a shooting. … It was a lynching.” The fictional President Bartlet notes that it happened right in front of all of us. That observation didn’t break my cohort when it was on a scripted screen from Sorkin’s laptop. But it’s coming close, now that it’s real.

To say official Washington is confronting its PTSD is an understatement. A violent mob marched to the Capitol a month ago to overturn the results of a fair election, to intimidate their elected leaders who would stand up for certified election results and would show Trump the door. Rank-and-file Hill staffers are still not sure how to process what happened. Reliving it yesterday helped no one’s mental health. Moving off the Hill, the 13-minute montage has now brought home that reality to more than a half a million Americans who streamed the clip on C-SPAN’s YouTube channel alone.

Congress’ first impeachment of Trump was about foreign aid, abuse of power and weaponizing the value of incumbency to keep a grip on power. This one is about insurrection aimed at women and men who are now Trump’s jury. Impeachment 1.0 was about legality and logic. Impeachment 2.0 is about emotion. And, in that, House Democrats have already landed a major win.

I keep clicking the replay button on the House managers’ video of what happened on Jan. 6. A dispassionate read says last year’s impeachment charges of abuse of power were on firmer legal ground, in the sense that Trump was extremely explicit in what he wanted to see happen. But it was yesterday’s video montage that forced me to push pause on the television, to lace up the sneakers and to go for a walk to get away from my screen. The video of a Capitol Police officer being trapped in a vice of anti-riot equipment gear was more than I could handle.

And — had many Senators not turned their heads away from the video screens showing it — the montage could have been what shuts the door on this chapter of America’s Trump era. Trump still has his own vice-like grip on the GOP, though. A conviction is unlikely to come at this point, meaning the United States Senate is going to give its tacit approval for what happened just steps from the Senate floor. If the video didn’t send your heart racing, that reality might. 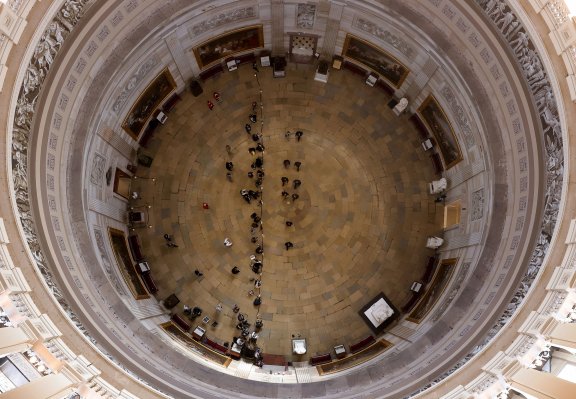