The first rule of broadcast primetime in the era of Peak TV states that every crime drama with widespread name recognition will eventually resurface as a CBS procedural. Hence the network’s twin hits Magnum P.I. and MacGyver. Its Hawaii Five-O reboot ended last year after 10 seasons, while its seven-season Sherlock Holmes riff Elementary wrapped in 2019. Despite short-lived disappointments like Rush Hour and Training Day, based on the movies of the same names, CBS has persisted with this strategy, dutifully adapting familiar stories into the syndication-friendly case-of-the-week format. Now—following the post-Super-Bowl premiere of The Equalizer, a formulaic but likable-enough action drama that casts Queen Latifah as a hero previously portrayed by Denzel Washington and Edward Woodward—comes The Silence of the Lambs sequel Clarice.

Debuting on Feb. 11, this frustratingly superficial psychological thriller follows the brave and insightful FBI trainee character originated, to Oscar-winning effect, by Jodie Foster. Set one year after the events of the film, in 1993, it finds Quantico grad and tabloid cover girl Clarice Starling (Pretty Little Liars alum Rebecca Breeds) ensconced at a snoozy desk job. She’s enduring a mandatory session with a smarmy psychotherapist (Shawn Doyle of The Expanse) who diagnoses her with “PTSD of the most egregious kind” when she’s summoned by Ruth Martin (Jayne Atkinson from House of Cards), the politician whose daughter was the captive whom Clarice so famously rescued from the clutches of serial killer Buffalo Bill. Now Attorney General, Ruth is creating an FBI task force to investigate serial violent and sexual crimes. Clarice is to be its telegenic public face—an assignment that places her under the supervision of her old Justice Department nemesis Paul Krendler (The Walking Dead’s Michael Cudlitz).

The three episodes provided for review suggest that Clarice will attempt to balance procedural-style story lines, such as a Waco-era cult siege that wraps up within a single twisty hour, with the kind of intricate, extended conspiracy plot embraced by prestige-branded cable and streaming crime dramas. That structure works fine, at least so far. What’s worrisome is that a longer arc requires nuanced storytelling and, in particular, characters with enough layers to justify several seasons’ worth of development. The show can’t keep pushing the same buttons every week.

Unfortunately, in early episodes, charismatic actors like Kal Penn and Nick Sandow (best known as Orange Is the New Black’s conflicted warden, Joe Caputo) seem wasted in bland FBI-guy roles. Paul comes across as the standard, casually sexist, easily corruptible law-enforcement type. Even Clarice fails to enthrall. That is, in part, because Breeds’ restrained (over-the-top West Virginia accent notwithstanding) performance can’t compete with the potent mix of strength and mortal terror Foster achieved. More disappointing is a backstory that harps on what little The Silence of the Lambs revealed about Clarice’s past—namely, that she was orphaned when her small-town cop father was killed in the line of duty—without deepening it.

For a show about a brilliant behavioral scientist, Clarice doesn’t seem especially interested in building a psychological profile that feels specific. “It would be easier for everyone if I just became comfortable with the term survivor,” Clarice tells her shrink in the opening scene. “I’ve found most people want me to be just the one thing, a simple thing. So they can relax, I guess.” There’s some promise in that tension between the kind of feminist icon America wants her to be—a perfect combination of hero and martyr—and the tougher, more private person she appears to be in reality. The show leaves that thread hanging, though. It, too, seems to prefer a simplistic brand of feminism, fetishizing victimhood as well as strength; drawing gender-essentialist contrasts between women’s emotional intelligence and men’s macho brutality; and depicting crimes in which men do unspeakable things to women, while leaving plenty of carnage behind to spark viewers’ outrage or empathy or prurience.

The genius of director Jonathan Demme’s film version of Thomas Harris’ novel The Silence of the Lambs is, in part, the elegance with which it illustrates, without having to explain, the isolation and fear inherent in being a female prodigy within a perilous field dominated by men who find you intimidating. How depressing that, while the diabolical psycho-killer Hannibal Lecter (who, for copyright reasons, can’t even be named in Clarice) recognizes her as a worthy foil, her Quantico mentor mostly sees her as bait. NBC’s prematurely canceled cult favorite Hannibal, which ran for three seasons beginning in 2013, was a Silence prequel updated to the 21st century. In lacing the relationship between Hannibal (still a practicing forensic psychiatrist) and FBI profiler Will Graham with homoeroticism, creator Bryan Fuller’s visually striking drama overhauled the sexual and gendered subtext of Silence, with its retrograde, gender-dysphoric villain, Buffalo Bill.

Both adaptations of Harris’ books—the standouts among many lesser big-screen Lecters—have not just more substance and subtlety than Clarice, but also more style. Demme’s movie is stark, blunt, crisp, chilling. Fuller’s florid and decadent series makes dismemberment disturbingly beautiful, reimagining the world through the eyes of an impeccably dressed aesthete who transforms his human prey into haute cuisine. But Clarice, which in some flashbacks actually reproduces shots from Silence, has the same drab, dingy atmosphere as every other crime drama that’s supposed to be more gritty than fun. “The world is more interesting with you in it,” Hannibal once told Clarice. This uninspired comeback makes the killer into a liar as well. 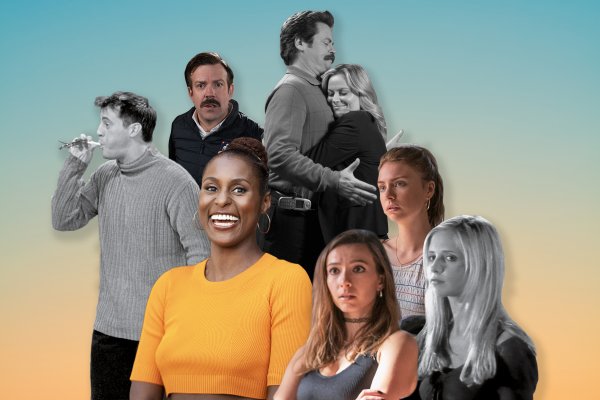 The New Class of Comfort TV: 16 Shows to Watch When You Run Out of Friends and The Office
Next Up: Editor's Pick