America's Cities Are in Crisis. They Should be Allowed to Raise Debt to Save Themselves

A quiet Times Square on Friday, March 2020 in New York, NY. The city officially announced the closure of all non-essential businesses and implemented a lockdown last week.
Photo by Erin Lefevre for Nur Photo
Ideas
By Zachary Karabell
Karabell is an author, investor, and commentator. His forthcoming book is Inside Money: Brown Brothers Harriman and the American Way of Power.

As the House and Senate move toward passage of a $1.9 trillion dollar COVID-19 relief plan, hard-hit states and local government are poised to receive $350 billion, in addition to billions more to assist in safe reopening of public schools. That kind of help from the federal government has been sorely lacking during the pandemic—and is utterly essential to any meaningful and sustainable economic recovery for the whole country.

But as vital as that money is, much of 2021 will at best see a halting recovery. With vaccine roll-out slower than hoped, it will be at least summer before many companies insist on workers back in offices, and even optimistic projections don’t see a major revival or tourism and travel until 2022. The result is that local governments and large cities especially will still face large gaps between they will take in and what they need to spend, even with generous subsidies from Washington.

That’s a challenge for any sustainable economic recovery. Cities are the economic engine of the country. The 25 largest metro areas account for half of the country’s $21 trillion or so in GDP, and the other several hundred smaller cities account for 35% more. Hundreds of billions in aid will staunch some of the damage of 2020, but the economy of these cities is counted in the many trillions. There will be no “roaring twenties” without cities thriving, and federal aid, however imperative, won’t be enough.

There is an obvious solution to this problem: unleash the ability of cities to borrow. Unlike the federal government, cities are highly constrained from borrowing by laws and state constitutions that either mandate balanced budgets or set low ceilings on the amount of debt that cities can take on.

That means that cities, unlike many other parts of government or private business, can rarely solve their budgetary problems except by cutting workers, services and pensions. That can create a negative cascade of service cuts leading to deteriorating quality of life – uncollected garbage, rising crime – that then leads people to flee which reduces the tax base, and which then necessitate further service cuts. To prevent that death spiral, we should just let cities borrow and spend and borrow and spend until the crisis has past. And to achieve that we need to change state laws to let them.

To be fair, the restrictions on borrowing arose from decades of mismanagement. That was true most dramatically for New York City in the 1970s, though other cities such as Detroit and Chicago were hardly models of fiscal rectitude. Today, however, the problems cities face are primarily the result of a pandemic. While some municipalities such as San Francisco have been too draconian in shutting everything pre-emptively, others have oscillated between too open and too closed, it’s clear now that not even a coherent public policy could have prevented massive economic damage and budget holes. If tourism crashes to a halt, there is no way for Las Vegas or Orlando or New York to avoid lost revenue. And if the federal government isn’t going to authorize emergency spending to float those economies, there is one easy answer: borrow.

Cities have, of course, long borrowed to meet specific needs, especially to underwrite crucial infrastructure projects, such as roads and bridges and sewers. They issue general obligation bonds, which can be repaid from taxes, and revenue bonds, which are pegged to specific projects that generate income like bridge tolls. It’s the former that have gotten cities into the hottest water. Throughout the 20th century, many city halls abused their borrowing power, taking on debt they could never hope to repay for projects that were never even built. History is littered with cities that took on either general debt or project debt to build something, and that money then ended up in the pockets of mayors and alderman and unions and cronies. Providence, Rhode Island, for instance, became a by-word for corruption with its amply funded “roads to nowhere” in the 1980s and 1990s and its mayor eventually imprisoned for racketeering and fraud. The city of New Orleans borrowed extensively for projects with money mysteriously gone walkabout; it took years to restore its credit ratings.

The risks of too much debt were nowhere more evident than with New York City in the 1970s. Having borrowed for years to supplement tax revenue, the city appealed to the federal government for a bailout in 1975, which the Ford administration denied, leading to the infamous Daily News headline, “FORD TO CITY: DROP DEAD.” New York then as now was constrained by the New York State constitution over how much debt it could issue, and those rules were tightened further after 1975, when the city’s finance were put into receivership without formal bankruptcy and city hall was placed on a debt and spending diet.

Limits on city borrowing is ubiquitous in the United States. Some of that is imposed by state governments which themselves have constitutional mandates to run a balanced budget; some of those limits are written directly into city charters: San Francisco can borrow no more than 3% of the city’s property value, which today caps debt at about $9 billion. Almost everywhere, however, cities have limits set not by the bond markets or the willingness of investors to lend but by statutes put in place over time to maintain guardrails on the natural tendency of urban governments to be profligate and corrupt.

Past precedent is important and instructive, but it shouldn’t be a straitjacket. Not only are today’s municipal governments more accountable and transparent (though much work remains to be done there), but interest rates and the overall availability of capital has never been greater. When New York went bust in the seventies, interest rates were climbing well above 10%. Today, a city with a decent credit rating can borrow for about 2% for 30 year loans, and even a city with mediocre ratings can borrow for less than 4%. That cost of capital matters. The challenge is almost always being able to meet interest payments, and with rates so low, that becomes much less of one.

Instead of being at the mercy of Washington or state capitals for aid, city leaders should work with statehouses and raise their debt limits, even if only temporarily. New York mayoral candidate and long-time proponent of more direct spending to boost individual incomes Andrew Yang explained it to me: “Cities should have the flexibility to borrow to smooth out the peaks and valleys, particularly during a historic crisis that is causing budget shortfalls around the country. We should give cities more ability to respond and adapt.”

Standing in the way is past precedent and current statutes. Debt diets may have made sense when they were put in place, and may make sense at some point in the future. But in a world awash in capital, with every country everywhere borrowing what it can to plug the holes created by the pandemic, tying the fiscal hands of cities because they misbehaved decades ago when interest rates were many multiples of what they are now makes zero sense.

If the federal government won’t use its ample economic powers to bolster ailing metropolises that are central to the American economy of the 21st century, then at the very least cities should be able to solve their own problems by finding the money themselves and not being forced into a death spiral of service cuts that will only prolong the pain. Rarely are solutions this easy and this evident. The only thing standing in the way is the will to break with the past. The future of America’s economy will be only bright if cities can navigate it unconstrained by debt diets that will starve them. 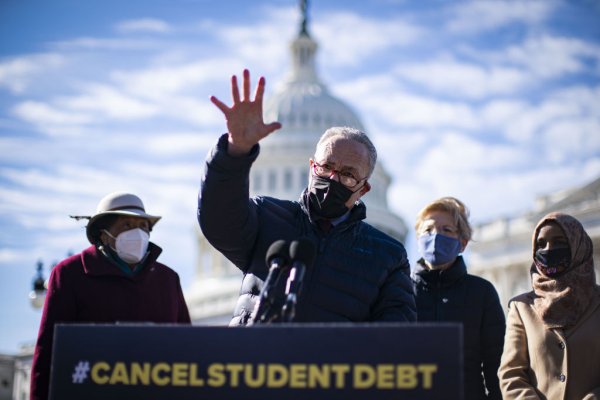 Why Student Debt Cancellation Is Vital for Americans Most Hurt by the Pandemic
Next Up: Editor's Pick