Just one: Windows XP was where I first played stuff like Civilization III, The Elder Scrolls: Morrowind, Europa Universalis II, Freedom Force, Dungeon Siege, Warcraft III, Neverwinter Nights and Age of Mythology. From a gaming standpoint, it was a godsend: the gaming versatility of Windows 98 somehow coupled to the resilience of Windows 2000 (I oversimplify, but that’s how we thought of it then). Windows XP basically put paid to all the PC gaming promises Windows 95 made half a decade earlier.

I remember XP’s debut better than any other operating system, I suspect because it arrived just a few weeks after September 11, 2001 (everything that happened around the end of 2001 is unusually vivid). I remember alternating between running it on a built-from-parts desktop PC and a woefully underpowered IBM ThinkPad laptop (that originally shipped with Windows 2000). I remember switching on ClearType and realizing just how awful aliased text looks. I remember playing games and — for the first time with a computer operating system — that sense that PC gaming was this rickety scaffolding prone to manifest inscrutable bugs or collapse outright finally faded (well, mostly).

And now Microsoft’s asking that we bid XP adieu. The last time I used it (and Windows) as a workspace was in the mid-2000s, on a hulking 12-pound Dell gaming laptop, before I threw in with Apple and separated church and state. XP remained my mainstay for PC gaming until its replacement, Windows 7 (we’ll not speak of Vista) in 2009, by which time I’d already said my farewells and dropped the little OEM booklet and install disc into storage, where it remains to this day. I haven’t seen XP up and running for years.

Until this morning, when my editor shared a link he saw on Reddit to what looked like a virtualization site. I clicked it and sure enough, there it was, booting up with the low-res Windows icon perched over a moving bar, the trademark F-Ab-Eb theme playing against “Bliss” (the default background of a cloud-shadowed green field in Sonoma County, California), and then of course, the sudden inexplicable appearance of a blue screen of death.

But then things got weird, and kind of cool. It turns out Microsoft (and developer Bradley and Montgomery) has a sense of humor after all. If you want to see what I’m talking about, click this link and give it a minute or so to take. Enjoy the most excellent chiptunes (that’s 10 n’s before the bandcamp.com link to the folks who wrote the music). And remember: W-A-S-D, the spacebar and the arrow keys are your friend (and you can hit “1” and “2” to switch between the machine gun and battery blast). 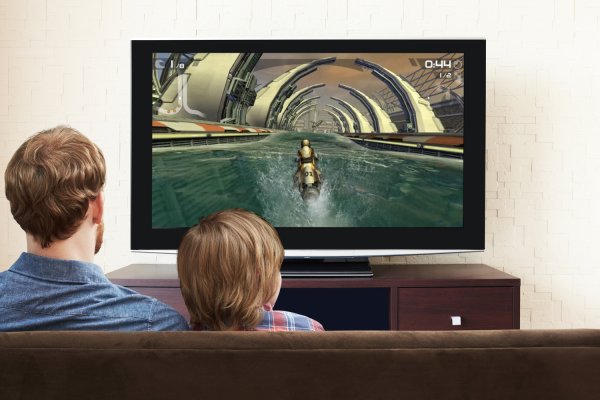 Interview: Amazon Says Fire TV Isn't a $500 Games Console, and It Wasn't Meant to Be
Next Up: Editor's Pick