(Miss this week’s Leadership Brief? This interview below was delivered to the inbox of Leadership Brief subscribers on Sunday morning, Feb. 7; to receive weekly emails of conversations with the world’s top CEOs and business decisionmakers, click here.)

The pandemic rocked the music industry. Live performances, which are such a critical part of driving the business (and making fans euphoric) were quickly shut down last year. Concerts are going to be slow to return. (Who’s up for crowding next to sweaty strangers, yelling at the top of their lungs?) Ethiopia Habtemariam, the president of Motown Records, has spent the past year assisting her artists in navigating the painful reality of life offstage while retooling album-release plans. She helped one artist cope with depression when a much anticipated record was postponed and, in the outbreak’s early days, counseled another to take the virus more seriously. “There was a lot of misinformation about COVID and communities that it was hitting,” she said. Habtemariam remembers one young artist who was still going out on the town telling her, “Oh no, that’s a rich-people thing.”

While live shows floundered, music delivered comfort to people stuck in their homes and apartments. Total audio consumption, which includes streaming and album sales, was up 11.6 % in 2020, according to MRC Data. And for Habtemariam, 41, the past year helped her ongoing mission to make the legendary Motown brand relevant in today’s culture. Back in 2015, she signed a joint venture with Quality Control Music, an influential hip-hop label based in Atlanta, leading to a string of megahits from hot young artists including the Migos, Lil Yachty and Lil Baby. Lil Baby, an Atlanta rapper, singer and songwriter, had the best-selling album of 2020, according to MRC Data, beating out Taylor Swift and the Weeknd. And Lil Baby’s single “The Bigger Picture,” released after the murder of George Floyd, became an unofficial protest anthem played at marches and rallies throughout the country. It has more than 112 million views on YouTube.

Habtemariam, who started her music career as an unpaid intern at 14, recently joined TIME for a video conversation on the pressures of taking over a storied label, the perils of social media for artists and her favorite live venues.

(This interview with Motown Records president Ethiopia Habtemariam has been condensed and edited for clarity.)

So, what have you been listening to, to get through the pandemic?

I went through a phase around April, May, when I was like going down memory lane of my childhood, reminiscing on songs that I grew up on. Middle school, high school years. And it was actually therapeutic in many ways. It kind of helped me get through a lot of the different emotions and feelings that I was having, and also it reminded me of why I fell in love with music.

Rumor has it that you were a big TLC fan.

I still think that they don’t get the credit they deserve because they were so huge! TLC, Aaliyah, Missy [Elliott], Lauryn Hill—I was a massive Janet Jackson fan as well.

I’m a huge fan of music, period. I’m a daughter of immigrants. My parents are both Ethiopian, and I’m Ethiopian American. I grew up in the South. So here I am, this young girl, with a name like Ethiopia; I was a bit of an alien, but music was my salvation. It was my escape, but it was also a bridge for me to connect and build friendships.

How did the pandemic disrupt your release schedule? You still managed to have one of the biggest albums of the year, with Lil Baby’s My Turn.

I remember it vividly because we scheduled some in-stores for him. I remember coming to Atlanta and making sure everyone had hand sanitizer. And then everything shut down, and we had to really come together to figure out how we were going to move forward.

We put it out Feb. 28, and it was massive. The response was incredible; everything was great. And two weeks later, the world shuts down. One of the things that was in the plan was, of course, a huge tour.

You used the time to put out a deluxe version of the album, and then after the murder of George Floyd, he put out The Bigger Picture, which became something of an anthem for social-justice marches. How did that unfold?

The kids were really upset, and there was some looting that was happening in the midst of the marches, and the mayor of Atlanta reached out, wanting Baby to come speak out to tell the kids to calm down. She knew his influence. And one of the things I respected so much about him was that he knew that he needed to say something and to speak up, but he wanted to really understand where everyone was coming from, where the anger was coming from, where the frustration was coming from. Of course he knew personally from his own experiences, but he went and met with community leaders and really educated himself on what was happening, went and marched and then went and created a record from an authentic place with a deep understanding that this was about oppression, suppression, and people just weren’t gonna take it anymore.

What was that like to be in the middle of that?

It was a big, wild moment. We had a staff meeting, and we played the record and the video, and there were people crying. It really brought everyone together in a really big way.

And it was huge commercially.

The sales were outstanding. The album has almost 4 billion streams. Today, right, we’re 3.7 million units sold globally on the album and 6.5 billion streams. It’s been astounding. His album was the highest-selling album of all of 2020.

Personally, how much do you miss going to shows?

I cannot tell you how much I miss live music. It’s been heartbreaking to not have that experience, to not have that level of coming together. The livestreams have been happening, but it’s no comparison to that connection of being at a show.

What are your favorite live venues?

The Forum in L.A., and I love the Troubadour.

How does discovery happen in 2021?

Discovery happens in a lot of different ways. Fans got tired and frustrated with gatekeepers. Being a major record label, you have to understand culture, you have to understand where things sit and that fans want to be a part of discovering something early and not feeling like people are pushing things to them, especially when discovering new artists. Social media is very helpful in discovering new talent. There’s organic A&R that is about that human interaction, going to see someone play live, and seeing if they are really connected to their fans and how they sound live. And then there’s the research A&R, where people are looking at songs that are taking off on TikTok or anywhere else and then pivoting and playing into that. Where the music business is today, there has to be room for all of it.

Have you signed people that you discovered on TikTok?

No, but we do utilize the platforms to bring awareness to our songs and projects.

What about the downside of social media?

It’s very layered when it comes to social media. I’ve seen some huge superstars be deeply affected by constantly consuming social media and taking in the opinions. It messes with their head. There have been conversations where we’re like, “Delete the f-cking app off of your phone.” It doesn’t matter how much money you have, well, you can be in a f-cking huge mansion somewhere, and you’ll be feeling like that 15-year-old kid who’s dealing with being bullied.

What was it like taking over Motown, the label that produced Smokey Robinson, Marvin Gaye, the Temptations, the Supremes, Stevie Wonder? That’s pretty daunting to follow in those footsteps with all that came before.

Thank you! Early on, yeah, I had crippling f-cking fear and anxiety around how do you live up to that. It’s not about competing with them. You can’t. It’s about honoring that history. When I stepped into the role, there was a question about Motown within the industry; it was like, “Motown, whatever,” and I was like “Wait, are you serious? Motown is known around the world!” Now I have to prove people wrong. I wanted to utilize Motown as a platform for other entrepreneurs. That was really important to me, in addition to developing new artists that again represent the range of where music is today. We have an artist who is nominated for a Grammy this year, her name is Tiana Major9. She is a young British Black artist with an incredible voice. Tiana is gifted enough to make incredible music for the rest of her life. I’m really, really proud of being able to develop artists like that, but then to also have this partnership with Quality Control. I want people to see that it doesn’t just happen once. And it was really important for me to break out of the idea that you have to prove yourself over and over again, as Black people, as Black executives. It should never be a question of can we do it.

What advice did Motown founder Berry Gordy give you when you took over?

There have been so many conversations. He has an incredible work ethic that I respect so much. And one of my big takeaways from all the conversations that we’ve had is that for each of us as human beings, you have to continue to evolve, stay curious, be open, but never lose your passion.

Last question: What is it about music?

I think it really is the rhythms of what connects all people. It takes away any barrier that society has put on us or what we’ve been taught that separates us. There’s power in the melodies, power in those notes, power in those lyrics. And I think that people always want and need to express themselves, and artists are able to create the songs that help them do it when they can’t find the words. It’s something that just accompanies every emotion you get to experience, and you feel like you’re not alone and I love that. 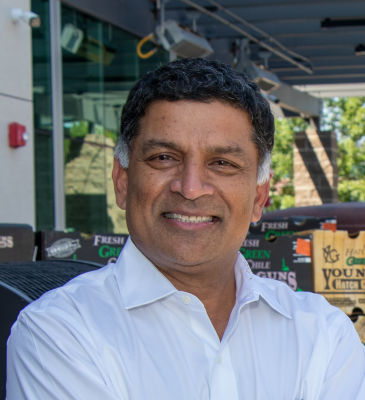 Albertsons CEO Vivek Sankaran Says His Stores Can Vaccinate More Americans. He Just Needs the Doses
Next Up: Editor's Pick