On the Friday before Memorial Day weekend last year, Carol Juel, the executive vice president and chief information officer at consumer finance firm Synchrony Financial, was having a video chat with Margaret Keane, the executive chair of the company’s board of directors who was CEO at the time. The conversation turned to Juel’s three children, who had been attending remote school since March because of the COVID-19 pandemic. With summer around the corner, Keane asked Juel if the family was looking forward to a break from virtual learning.

“I said, no, Margaret, when they’re out of school, there’s nothing,” Juel recalls explaining to her boss. “There’s no camps. There’s no sports. There’s no vacation. There is just three months of time.”

For the next 40 minutes, the two executives delved into the difficulties facing working parents. It was no secret that employees across the company, especially those with children, were feeling the stress of pandemic life: in town hall sessions, surveys and other company forums, parents had noted the challenges of doing their day job while taking care of their kids. “We were all working from home. But we were all living at work,” says Juel, who has an 11-year-old and eight-year-old twins. “The boundaries were just—they no longer existed. And so we knew we had a problem and we knew we wanted to do something.”

Synchrony, headquartered in Stamford, Ct., provides the banking system for store-branded credit cards from companies like Amazon, Lowe’s and TJMaxx, as well as consumer financing programs for health care providers, veterinarians and other businesses. About 60% of its 16,500 employees are female, which made the company particularly exposed to the pandemic’s impact on working mothers. According to a September report from McKinsey & Co., mothers have been 1.5 times more likely than fathers to spend three or more additional hours per day on housework and childcare during the pandemic. Nearly one in four women with children under age 10 has considered leaving the workforce, according to the same study.

Although lack of childcare has been an issue for working parents around the country since the earliest days of the pandemic, not all employers have actively tried to make the situation more manageable. According to a July 2020 survey of 170 employers conducted by the U.S. Chamber of Commerce Foundation, only 42% of essential businesses and 38% of nonessential businesses had offered additional child care assistance since the pandemic began. One in four employers has added flexible work hours, while a tiny share has provided hands-on solutions: 4% initiated dependent-care flexible spending accounts and even fewer offered onsite care, back-up care, or partnered with a care provider.

Juel thought Synchrony could launch a company-wide program to offer parents some relief. By the end of her call with Keane, they had hatched an idea to offer a free, remote summer camp. Depending on their age, employees’ children could sign up either as campers who would attend virtual programs or as counselors who would treat the experience like an externship. Three weeks later, the camp was up and running. Over the course of the summer, more than 3,500 campers participated in more than 600 activity sessions designed by 130 externs. The programs covered arts and music, fitness and sports, technology, science and culture, among other topics. The summer camp was so successful that the company modified it into a remote after-school tutoring program for the 2020-21 school year.

Juel says Synchrony’s summer camp worked because the company practices “agile” business principles—a strategy that calls for forming teams with a mix of skill sets that are given adequate resources and freed from bureaucratic inefficiencies. The goal is to solve business problems in the most efficient and effective way possible. Prior to the pandemic, Synchrony used agile practices to roll out new technology and business products. When the outbreak began, Juel and other company executives leaned on that strategy to make major operational changes. The company sent its corporate office staff home on March 13, 2020, but there was no plan for its call center employees who were based in U.S. cities, as well as India and the Philippines. “It wasn’t as if they could pick up a [computer] and go home,” says Juel.

Within three weeks, Synchrony delivered Chromebooks to all U.S. call center employees, set up virtual desktop capabilities for those abroad, then trained them and established new security and tech support processes. “I had people renting U-Hauls in the middle of America to meet UPS trucks at loading locks, picking up equipment,” recalls Juel. “It’s amazing, when you empower people, how fast they can move.”

Two months later, Juel took a page from that same playbook to roll out the summer camp. Employees in human resources, risk, sales and marketing structured the camp and focused on outreach, while technology employees hosted and secured the live video sessions. Other employees from around the company volunteered to mentor the externs, helping them come up with class topics and hone their presentation skills.

When the camp launched, it wasn’t fully polished—Juel calls it a “minimum viable product” in her techy parlance—but the team was quick to make improvements based on feedback from everyone involved, particularly the parents. For instance, they started recording the live sessions so that parents could choose what time of day the kids would be occupied. They also sent the campers patches, similar to scouting badges, for competing different categories of sessions. And when parents spoke up about screen time concerns, the company mailed materials for non-screen activities that kids could do on their own, as well as family activities with a community service bent, like mask-making kits and birthday boxes for underprivileged children.

Synchrony’s camp wasn’t just beneficial for the parents—it was also good for the company as a whole. The experience made employees feel supported and understood, which boosted morale. And with the kids occupied, workers could be more productive. “[The camp] freed up my time to actually work as opposed to trying to figure out how to entertain my kids,” says Tara Steele, vice president of marketing in Synchrony’s healthcare division who lives in Huntington Beach, Calif. with her seven- and five-year old. “The fact that they chose to allocate this much time and energy and resources to putting this program together, it was just incredible.”

The experience was also beneficial to the externs, like Ajani Green-Watson, an incoming junior at Horace Mann High School in the Bronx, NY, who seized the opportunity when her initial plans to attend a summer program at Cornell University moved online. “I had a lot of flexibility in my schedule to do more things,” says Green-Watson, who heard about the camp through her mother, a Synchrony vice president who oversees escalated customer inquiries.

Green-Watson’s sessions focused on diversity, debate and arts. As a guitarist, she would often perform her own musical compositions that related to the topic of the day, then introduce a concept and ask the campers to participate. As she moderated kid-friendly debate topics (like whether a hot dog was a sandwich), Green-Watson conveyed the importance of being inclusive and open to everybody’s opinions. Over time, she became more confident in her own ability to direct the classes. “Synchrony really taught me that I can do anything that I put my mind to, and I will have to adapt to situations,” she says. “There are some things in life that you just can’t prepare for. But being able to be flexible is a very, very valuable life skill that I learned over the summer.”

Looking back on her family’s summer, Steele says the camp alleviated some of the crushing pressure of working and parenting. “As a mom, I was feeling guilty about potentially having to put them in front of the TV or in front of an iPad,” she says. “So from that aspect, it was just a relief. It’s just reinforced that Synchrony got it. They understood what we were dealing with as working parents.” 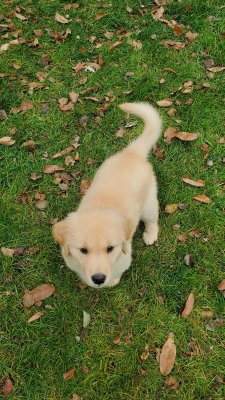 How a Pandemic Puppy Saved My Grieving Family
Next Up: Editor's Pick