In Washington, there’s a pretty set playbook for when politicians or their aides find themselves with an onslaught of negative headlines filling the inbox and hostility knocking at the door. You apologize, keep your head low, maybe resign to spend more time with your family and come back with a book deal, cable news contract or pet cause that offers redemption or credibility. It’s played out time and again for lawmakers like Newt Gingrich, Al Franken and Bob Packwood, or powerful insiders like John Dean, Ollie North and David Petraeus.

Then there is Rep. Marjorie Taylor Greene. She is the newly elected member of the House from a deep-red district in Georgia that was apparently fine with sending a QAnon acolyte to Washington. She now stands as the leader of what might as well be called the Qaucus. And she’s quickly turning almost every waking moment into a crisis for Republicans, whose party faithful join Greene in her QAnon beliefs. Forty-one percent of Republicans say the bonkers ideas are a net positive for the country, or twice the national average.

Greene drew criticism over her fringy endorsement of baseless conspiracy theories during her campaign, but her corner of Georgia is roughly 3-to-1 Republican. Her Democratic opponent dropped out before Nov. 3, which may have just been good sense given only nine other districts in the country are more heavily Republican. The fact that she chased two Muslim lawmakers through the Capitol in 2019, demanding they take their oath of office on a Bible rather than a Quran, didn’t disqualify her among voters in the district. Nor did her social media footprint dent her in the least. When she became a candidate, she appeared to try to keep some distance from QAnon and its mythical leader Q, but she didn’t cast herself as an understudy to the Apostle Peter, either.

But now Greene is in Washington, one of 435 voting members of the U.S. House and a pin-wearing member of the Republican conference. She arrived under heightened scrutiny and has done little to calm the nerves of her fellow Republicans. She wore a “Trump Won” facemask on her first day in office, sported a “censored” mask on the day she tried to derail the counting of the Electoral College and then refused to wear one at all as she and colleagues hid from the insurrectionists who stormed the Capitol. We’ve since learned, via CNN’s reporting, that she once seemed to lend support to executing prominent Democrats before she herself was an elected official. Last night, a reporter at a town hall in Georgia tried to ask her about her past social media posts. The reporter was threatened with arrest.

To say Marjorie Taylor Greene is a challenge to the Republican brand is a massive understatement. Her colleagues know it, too.

Which is why Republican leaders are trying to figure out how to solve their problem of MJT, as she is known in some circles, the same way progressive icon Alexandria Ocasio-Cortez is known as AOC. Greene is one of the most visible reminders of just how far the party that nominated bland technocrat Mitt Romney in 2012 veered toward the bombastic celebrity Donald Trump four years later. And, if the party continues on this trajectory, Greene soon won’t be a curiosity in her openness to QAnon-style lies including that Hillary Clinton videotaped herself murdering children, that Democrats operate a child sex trafficking ring out of a D.C. pizza shop’s basement, and horrific mass shootings were staged to help ban guns. On that last point, she actually has confronted one survivor of a Florida school shooting and accused him of being on activist billionaire George Soros’ payroll. Her apologists say this all happened before she was running for office, but it stretches credulity to say that much changed over two years.

Some in the party have started the pile-on. “She is not a Republican,” tweeted Rep. Adam Kinzinger of Illinois, one of the 10 Republicans who voted for the article of impeachment against Trump. “There are many who claim the title of Republican and have nothing in common with our core values.” Republican Minority Leader Kevin McCarthy — who today is meeting with Trump in Florida — has so far only said he plans to speak with Greene about her past comments, social media clicks and writings.

It’s clear that every moment spent on this is one not making the case to Americans why a conservative counter to the Democrats’ control of the House, the Senate and the White House matters. Greene is not only wasting GOP leaders’ time, she’s creating a rallying cry for the opposition. For years, Republicans have linked all Democrats to boogeymen like Nancy Pelosi, AOC and Hillary Clinton. And it goes both ways. George W. Bush by the end of his term was toxic. Greene may prove lethal.

Not everyone is impressed with the way the party is handling Greene and its broader QAnon problem. “I’d say expel her, but they’ll probably vote her into leadership instead,” tweeted Rory Cooper, a former top aide to then-Majority Leader Eric Cantor.

To that point on expulsion, it finally arrived for full consideration. Last night, Rep. Jimmy Gomez, a California Democrat, announced a resolution to remove Greene from office. Greene would be just the sixth House member ever removed this way. (The last was from my hometown when Congressman Jim Traficant was convicted by a jury in 2002 convicted on 10 criminal charges of bribery, tax evasion and racketeering.) The threshold? Two-thirds of the House would have to back it, meaning 81 Republicans would have to join every Democrat to vote her out.

In a statement to TIME, Greene cast herself as a victim.

Given the resolution to remove Greene is at present coming from a Democrat, it probably won’t carry much weight. But the minute Gomez can recruit a Republican — or offload it to one — things get tough for GOP leadership. Do they defend one of their own, or do they cut their loss? Or do they do something in-between, as they finally did with Rep. Steve King of Iowa and his long history of racist statements when they stripped him of committee assignments, and hope Greene takes the hint and quits. The seat will remain in Republican hands regardless. It’s just a question of whether they are willing to poke the QAnon crowd in their base. Let’s see what Q has to say about it. 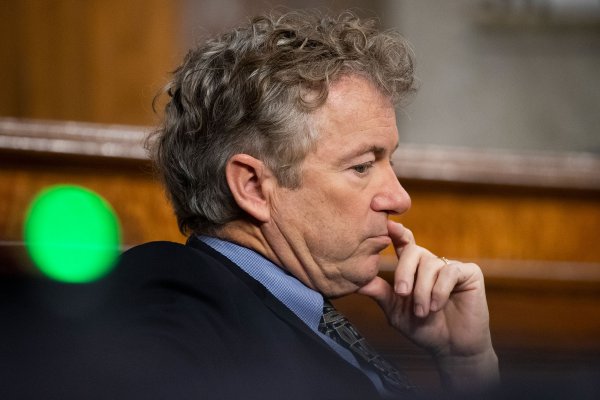