The US Department of Justice building in Washington, D.C., on July 22, 2019.
Alastair Pike—AFP/Getty Images
Ideas
By Ankush Khardori
Ankush Khardori is an attorney and former federal prosecutor who specialized in financial fraud until early 2020

On Monday, the state of California made a startling announcement: Last year, the state lost more than $11 billion as a result of unemployment benefits fraud—“billion” with a “b”—and another $20 billion is under investigation. The Associated Press attributed this to “sophisticated hackers, identity thieves and overseas criminal rings,” and though the news was surely shocking to many people, this has been a crisis in plain view since last spring, when overworked state unemployment agencies began making their first reports of this widespread and startlingly effective crime spree—much of which is suspected to have originated overseas. It is also just the latest evidence of how the Justice Department has lost much-needed ground in the global fight against financial crime after four years of disinterest and ineptitude under the Trump Administration.

Joe Biden’s nomination of Merrick Garland to be his Attorney General has given hope to many people who believe that the Justice Department has been grossly and tragically mismanaged during the Trump Administration. I count myself among that group, as a former federal prosecutor who specialized in financial fraud and white-collar crime until early last year. Throughout the campaign and transition, Biden’s team has demonstrated a strong focus on improving the department’s civil rights enforcement work, reestablishing the department’s independence from the White House and improving morale at the agency. These are all worthy and timely objectives, but comparatively little public attention has been paid to an unprecedented crisis in financial fraud and white-collar crime.

In fact, we are in the midst of a domestic and global epidemic of financial crime that has gotten significantly worse under Trump for both individuals and corporations alike. The FBI reported last year that internet crime had reached its highest level in two decades, resulting in more than $3.5 billion in losses to individuals and businesses. According to the Federal Trade Commission’s most recent annual report, 40 million Americans were victimized by mass-market consumer fraud in 2017 (an increase of more than 50% from the number six years earlier), and there are indications that 2020 may be the worst year yet. A study early last year from the University of Pennsylvania’s Institute for Law and Economics, drawing on two decades’ worth of data, made a compelling case that misconduct at financial institutions has been “on the rise,” and around the same time, PricewaterhouseCoopers released the results of a global survey of thousands of companies that showed that “fraud and economic crime rates” are at “record highs” and had resulted in about $42 billion worth of losses in the prior two years. Last fall, BuzzFeed published a series of investigative reports based on “suspicious activity reports” that banks must file when they suspect financial misconduct—reports that are usually kept secret—that provided the public with unusual insight into the sorts of money-laundering problems that now plague international banks today.

Meanwhile, according to data maintained by Syracuse University, the number of federal white-collar prosecutions repeatedly fell to new lows under Trump—even before the pandemic resulted in a sharp decline in federal criminal prosecutions across the board. For its part, Trump’s Justice Department was busy in its final months patting itself on the back in public forums for its dubious efforts to pursue fraud in the Paycheck Protection Program, while doing virtually nothing about the pandemic-related consumer fraud that has resulted in more than $300 million in reported losses or the billions of dollars in losses to unemployment agencies that states have been reporting since last year, long before California’s public disclosure on Monday.

There are reasons for the long-term increase in financial fraud that transcend any particular administration. As anyone with a cell phone and email account knows, the public is inundated with fraudulent offers and claims on a daily basis. These high-volume, low-yield tactics may seem silly, but they are effective. At the same time, technology has made it easier for criminals to perpetrate these scams from abroad and to mask their identities, and reports of massive cyber-hacks now seem to barely break through the news. Our increasingly opaque and fractured international financial system has exacerbated the problem, both by making it easier for mass-market fraudsters to route and hide their ill-gotten gains, and also by making it harder to detect and pursue more sophisticated financial and corporate crime.

Prior administrations are not blameless. The Justice Department under President George W. Bush aggressively pursued accounting fraud at major corporations in the wake of the dot-com bust, but that same administration allowed fraud to spread in both the retail and secondary mortgage markets so widely that it eventually brought the global economy to its knees. President Barack Obama’s Administration inherited this unfortunate state of affairs, but the public bristled at the dearth of criminal convictions for high-level corporate executives in the wake of that financial crisis. Still, the department was making significant and sincere efforts in its pursuit of financial fraud and white-collar crime, even if those efforts were often unsatisfying.

Much of this progress was wiped out under the Trump Administration. This is not the fault of the line attorneys who I served with. It is the result of the mismanagement and misplaced priorities of the political and senior career staff at the department under Trump—just one part of the broader institutional deterioration at the agency.

Besides the story that the numbers themselves tell, the situation has become absurd in ways that would have been hard to predict. For instance, department officials during the Trump Administration spent an inordinate amount of time fighting a market-manipulation tactic known as “spoofing,” but the principal victims to date appear to be the millionaires and billionaires who own private high-frequency trading firms. (Disclosure: I worked on this effort while at the department, and I secured the court rulings that allowed the department last year to obtain a large monetary settlement from J.P. Morgan.) In one of those cases last year, a prosecutor who was promoted to a managerial position during the Trump Administration complained to a court during a pretrial hearing that “the defendants’ assertion of all their constitutional rights potentially puts some of those rights in conflict with one another”—a bungling and embarrassing entreaty that fortunately failed. A story last year in The Financial Times described a bizarre and amateurish episode in which Justice Department officials managed to antagonize law enforcement officials in the United Kingdom—a vital ally in the global fight against financial crime—by complaining about the conduct of a U.K. government lawyer at the request of a criminal who was cooperating with the U.S.

Biden did not vigorously campaign on increased criminal enforcement in this area, but his Administration would do well to pursue it. This should not be difficult as a political matter given the Democratic Party’s broader interest in increased financial regulation and, more important, because financial crime and white-collar crime has a significant and severe impact on regular Americans—a large number of whom already struggled to pay their bills even in the relatively strong pre-pandemic economy.

Among other things, this would mean dedicating more resources and attention to these investigations at the Justice Department and asking Congress to do its part by increasing funding for prosecutors, law enforcement agents and financial analysts, as well as providing money that would allow the department to systematically track the prevalence of financial fraud and white-collar crime in the country—something that, amazingly, it does not do in the way that it does for other crimes. The department’s incoming leadership would also do well to improve its coordination efforts with regulatory agencies that are also likely to be reenergized under Biden—particularly the Consumer Financial Protection Bureau and Federal Trade Commission. Perhaps most dauntingly, it is long past time to undertake a searching review of the department’s work with international law enforcement partners—whose assistance is often critical in complex investigations these days—and to explore ways that our government can incentivize greater and faster cooperation from countries that lack the legal infrastructure or political will to crack down on transnational financial crime that originates in or passes through their borders.

This is a considerable challenge, and even if Biden’s Justice Department pursues it aggressively, the work would probably not pay visible dividends for years. The investment, however, is both overdue and critical to the long-term economic well-being of the American public. 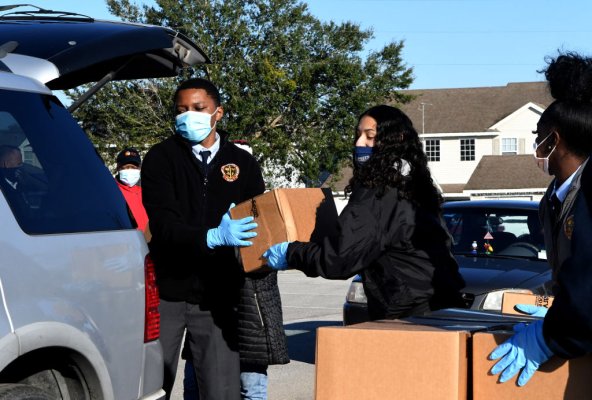 We Need Monthly Stimulus Checks Until the Pandemic Is Over
Next Up: Editor's Pick