Congresswoman Deb Haaland delivers remarks after being introduced as U.S. President-elect Joe Biden's nominee to be the next U.S. Secretary of Interior at the Queen Theater on Dec. 19, 2020, in Wilmington, Delaware.
Alex Edelman/AFP—Getty Images
By Olivia B. Waxman

Ada Deer became the first woman to run the Bureau of Indian Affairs in 1993 during President Clinton’s first term, but that didn’t mean she was always in the loop on meetings at the highest levels of government on issues that could affect tribal lands.

“I heard over the grapevine that there was going to be a meeting of Indians in the White House. And I’m thinking to myself, ‘well, why don’t I have that information?'” Deer recently recalled to TIME over the phone. She says she urged the White House to invite the leaders of what was approximately 550 tribes and Clinton made national headlines as the first President to invite all of the tribal leaders to the White House since 1822. However, she felt removed at times within the Department of the Interior for the rest of Clinton’s first term.

“I didn’t really have the working relationship that I had hoped I would have [with then Secretary of the Interior Bruce Babbitt],” she recalls. “I didn’t get consulted. And I found out that Indians were going up to his office and whatever they were discussing never got transmitted to me. But I figured he was the boss, and I was under him. And I still was able to do quite a lot of good work.”

Native Americans nationwide hope that even more good work can be done after Deb Haaland has been confirmed as the first Native American woman to lead the Secretary of the Interior, and the first Native American Cabinet secretary, on March 15. She will oversee an agency responsible for public lands, waterways, wildlife and the protection of endangered species, and maintaining relationships with tribal governments, to name a few of its far-reaching responsibilities. Bureaus under Haaland’s authority will include the Bureau of Land Management, the U.S. Fish and Wildlife Service, the National Park Service and the Bureau of Indian Affairs.

TIME asked historians who are also Native American what Haaland’s confirmation meant to them and overall, they have high expectations that Haaland’s confirmation is a step towards better understanding of what Native American communities have endured for centuries. But they also maintain a level of cautious optimism, as the history of such representation milestones shows these figures can be caught in a complicated balancing act between managing what’s best for Native American interests and U.S. government interests.

But a Native American Secretary of the Interior is still a monumental milestone. Haaland was born in 1960 in Winslow, Ariz., at a time when there were still Native Americans who couldn’t vote in the U.S.

“Even after she’s born, Native people are not guaranteed citizenship rights in certain areas of the United States, so to have Deb Haaland come from these communities and then be put in a leadership position in the federal government is really powerful,” says Holly Miowak Guise (Iñupiaq), an Assistant Professor of History at the University of New Mexico.

Haaland will be running a department that historically sought to implement policies to control and contain Native Americans.

“I think it’s very important to remember that a lot of the powers that the federal government has exercised over Native communities, families, individuals, in the 20th century, were bureaucratic rules and regulations,” K. Tsianina Lomawaima (Creek Nation descent), a retired Indigenous Studies professor who taught at Arizona State University. “The thing about bureaucratic rules versus legislation is they’re not reviewable by the courts, even if you have standing in the courts, which Native people haven’t always had.”

At the turn of the 20th century, Hopi leaders in northeastern Arizona wound up in Alcatraz for resisting enrolling their children in federal schools, at a time when Native Americans couldn’t choose what schools their children attended. And after Native American basket weavers fell ill from pesticide use in areas where they gathered materials, the California Indian Basketweavers Association formed in 1992 to improve cooperation and coordination over land use between superintendents of federal lands and Native American communities.

“Actually effecting change within a four-year term of an administration might be really, really tough, but I guess I’m optimistic, at least, that a different kind of person at the top [who] is attentive to these issues and can send those messages down the chain of command could conceivably make a huge difference,” says Lomawaima.

Of course, there is a long history of Native women acting as spokespeople for their rights and their lands outside of federal agencies. After the California Gold Rush in the mid-19th century, Paiute activist and public speaker Sarah Winnemucca traveled nationwide and all the way to Washington, D.C., talking about the importance of protecting California Indian lands, and raising awareness about the violence in the American West.

“[Winnemucca] calls out Bureau of Indian Affairs agents who are corrupt, who basically withholding resources that were supposed to be provided by the federal government to the Paiute people and forcing them into conditions of poverty and not supplying food. Going from having potentially corrupt BIA agents to having a Native woman lead the Department of Interior is really pretty incredible,” says Guise.

But representation on the surface doesn’t always translate into full representation in practice. Ely Parker became the first Native American Commissioner of Indian Affairs back in 1869, after serving as a military secretary to General Ulysses S. Grant during the Civil War. After the war, Grant counted on Parker to carry out his “peace policy,” which in reality, would end up leading to confining Native Americans to reservations, “with as little conflict as possible,” according to Doug Kiel (Oneida Nation), an Assistant Professor of History at Northwestern University.

“Some of these figures in the past have been assimilationist,” says Kiel. “And I don’t want to suggest that that’s who Deb Haaland is. Because I do not think that she is. But we should also keep our expectations moderate.”

In the 1960s, during another period of U.S. social and political transformation, Robert L. Bennett became the first Native American to serve as Bureau of Indian Affairs Commissioner in nearly a century. At a time when Native programs were expanding under President Lyndon B. Johnson’s Great Society agenda, Bennett, who had worked his way up in the agency over three decades, faced criticism from Native American youth activists in the burgeoning Red Power and American Indian Movement that fought for increased tribal sovereignty.

“The early years of the emergent Red Power movement were not supported by these folks in powerful positions in Washington, D.C., who, for them, felt like it was an important opportunity for progressive change, and in that moment, as the Red Power movement is emerging and heating up, people are increasingly frustrated with this investment in slow progressive change,” says Kiel.

While it remains to be seen what Haaland will accomplish in President Joe Biden’s administration, Deer says Haaland’s seat at the table as the first Native American Cabinet secretary will go a long way in terms of showing people that Native Americans still exist.

“We’re here. We were the first people here, and we have survived up until now,” Deer says. “It’s just remarkable that Indian people have survived so many bad policies.” 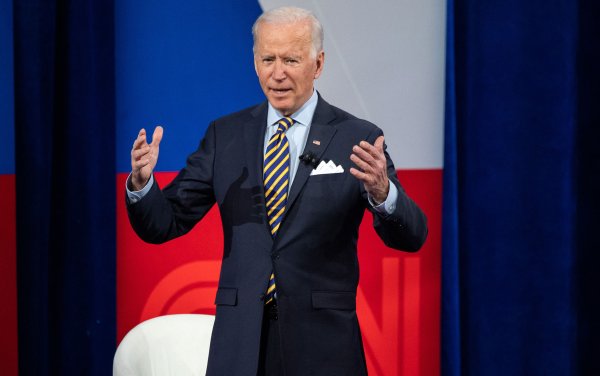 Why Biden's First Major Trips Are to Sell His Relief Plan
Next Up: Editor's Pick