'Hate Never Disappears. It Just Takes a Break for a While.' Why the U.S. Capitol Attack Makes Holocaust Remembrance Day More Important Than Ever

Among the most shocking images from the Jan. 6 insurrection on Capitol Hill were pictures of a man wearing a sweatshirt that said “Camp Auschwitz” and “work brings freedom.” It’s an anti-Semitic reference to the Nazi concentration camp and extermination center where over 1 million Jewish people died or were murdered during the Holocaust.

The hoodie-wearer Robert Keith Packer was arrested in Virginia a week after the attack on Jan. 13. Two days later, at an emotional press conference, House Speaker Nancy Pelosi choked up when she singled him out as “one figure” that stood out to her the most after watching “so many disgusting images.”

“To see this punk with that shirt on and his anti-Semitism that he has bragged about…be part of a white supremacist raid on this Capitol, requires us to have an after-action review to assign responsibility who are part of organizing it and incentivizing it,” she said.

To scholars of the history of anti-Semitism and Holocaust history, however, the anti-Semitism on display was shocking, but not new. To them it was the latest example in a long history of the association between white supremacist groups and pro-Nazi sentiment in America that predates World War II. In fact, in the 1930s, many Americans admired aspects of Adolf Hitler’s agenda, and pro-Nazi Americans rallied at Madison Square Garden.

More than 75 years after the end of World War II, the Jan. 6 Capitol Hill attack became the latest reminder of how Nazi ideas still endure. For this year’s International Holocaust Remembrance Day on Wednesday—which marks the Jan. 27, 1945, liberation of Auschwitz and has become an annual occasion to remember the 6 million Jewish people who died during the Holocaust—TIME reached out to Steve Ross, professor of History at the University of Southern California who is writing a book called The War Against Hate: American Resistance to White Supremacy After 1945, to understand where the insurrection fits in the history of anti-Semitism in the U.S. and American Nazi groups.

What is the significance of the Jan. 6 insurrection on Capitol Hill as we approach International Holocaust Remembrance Day?

That a President— a now former President—lies to the American people, lies to himself—is not willing to accept the basic premise of American democracy, which is a peaceful transfer of power. What it suggests to us is that hate has never left our country. It’s just simply gone underground at different points and then has reemerged when someone at the top allows it to flourish. And that started I would argue, in Charlottesville, when Trump announced that there were good people on both sides, and when the President of the United States then also encourages those people to come to D.C.

This is why we need a Holocaust Remembrance Day because these battles are constantly being waged over and over again. Hate never disappears. It just takes a break for a while.

Where does the attack fit in the history of anti-Semitism in America?

My mother was in Auschwitz, and my father was in Dachau. When I saw the “Camp Auschwitz” sweatshirt, to say it repulsed me, turned my stomach, would be an understatement. The “6MWE” T-shirts [seen at past rallies] stands for Six Million Wasn’t Enough. I would say that this is not new, that there is a continuous line of far-right groups like the Proud Boys, the Oath Keepers, that goes back to 1945, and the end of World War II.

We are so enamored with “the Good War” and “the Greatest Generation,” the myth that all these men and some women from different backgrounds went off to war, and it brought a greater sense of American democracy, tolerance and diversity… I think that’s exaggerating. They came to respect one another, and at the very least, felt when they came back from war, everyone deserved to live a life of not being in fear and being able to prosper.

But that’s only one half of the story. There were a lot of Americans, and we saw their grandchildren out there [on Jan. 6], who did not go off to war to fight Hitler and Mussolini, to fight Nazism and fascism. They went off to [World War II] simply because Japan bombed us. And in their mind, when they came back from war, they expected everything would be the same. And everything being the same means that Blacks, Jews, Catholics, minorities knew their place… But when [minority groups] started demanding greater rights than they had had before the war, that’s what sparked off resentment.

The book I’m writing now talks about several groups that would keep reconstituting themselves through the rise of the Nazi Party in America. White supremacy meant that Blacks and Jews have not known their place, and therefore they need to be put in their place. And we saw that this has been going on since 1945, sometimes more intense, sometimes less intense. But you can draw the line right back there.

What factors from 1945 onwards are most important to the spread of white supremacy and anti-Semitism?

[During the] Cold War era, the FBI under J. Edgar Hoover allowed anti-Semitism and racism to persist. They were so fixated on left-wing communists that they paid very little attention to right-wing groups.

You had a group called the Columbians out of Atlanta in 1945 and 1946 that was expelled from the Klan for being too radical in their racial views. They wanted to exterminate all Jews and send Blacks back to Africa. J.B. Stoner by 1946 starts the Stoner Anti-Jewish Party—later renamed the Christian Anti-Jewish Party—which also calls for the immediate extermination of Jews saying that Hitler was not efficient enough. He was involved in a whole spate of bombings of synagogues and Black churches in the late 1950s and 1960s. It was happening throughout [the U.S.] mainly in the South, but also throughout the country, in New York City, New Jersey, and on the West Coast. He also formed the National States Rights Party. He is one of the godfathers of white supremacy.

Yes, there were not only Nazi movements in the rest of the world, but in America, in New York…

The National Renaissance Party in New York is the first major Nazi Party, and they, in themselves, are not so important. But what is important is its National Renaissance Bulletin that becomes the main vehicle for fascists and Nazis throughout the world. They communicate through this bulletin with Nazi leaders who had fled before they got arrested, with those who had been arrested, with those who had avoided arrest. And I find this correspondence throughout the world. This [publication] was kind of Nazi central for the world during the ’50s. It was the kind of Twitter of its time, but without the instant [communication].

And the interesting thing, of course, is the person who was put in charge of all the correspondence because he could read and write German was a man named Mana Truhill who was a spy for the Non-Sectarian Anti-Nazi League. He was working undercover for them, and he helped expose all these people.

Tell me more about the people who exposed anti-Semitic white supremacists in the post-war era.

Three groups in New York, the Anti-Defamation League, the American Jewish Committee and a group called the Non-Sectarian Anti-Nazi League said “no one in government is paying any attention in a serious way.” And they started running spy operations, which they continued from 1945 to 1979, to protect Jews and Blacks from white supremacists, not just in the South, but in New York, the Midwest and the West Coast. And they were the ones who managed to go undercover. In 1946, they would break the Columbians apart by sending undercover agents who penetrated the group, secretly photographed evidence, sent it to the Attorney General of Georgia, who prosecuted the Columbians and shut them down. And that was a great moment of victory until a number of the Columbians went off and formed other groups.

And that’s what you will see. All these different groups that we have now—whether it’s the Proud Boys, the Oath Keepers—from 1945 onwards, what I have seen is whenever they are finally put down by the government, the leaders reconstitute themselves and form a different group.

Have you noticed trends for when these anti-Semitic white supremacist groups are active from 1945 onwards?

When you get these Red Scares going on in Congress in particular, it allows these right-wing groups to come out from under the rocks proclaiming themselves as true patriots who are going to save America from the left.

This period of the post-war was a period when Southern politicians, in many ways, ruled the Senate. You had a lot of Southern senators who were also Klan members, so they’re not going to crack down against any of these right-wing groups. The Senate [held] hearings on communists and Hollywood communists around America, and in the mid-1950s, they hold a hearing on fascism and fascists for a day or so, and they announced there’s no threat of fascism in America, period. But they continue talking about the threat of the left-wing.

And that’s part of the legacy. We are able to hide all the anti-democratic groups under this rubric of “fighting to save America from the communist threat.” And whenever you talk about the communist threat, it’s code also for the Jewish threat because [these conspiracists falsely believe] Jews are both controlling the world’s capital, controlling the banking system and trying to undermine and destroy capitalism. So you’ve got it at both ends, propping it up to destroying it. So again, hate is not a rational thing and the kind of explanation for hate is not always a rational explanation.

Are there any myths or misconceptions about the association between anti-Semitism and white supremacist groups in America that you’d like to debunk?

One of the questions I got about my book proposal was, “But these are small numbers of people. They came, they disappeared. Are they really that important?” And I would argue if you have made a whole group of Americans live a life where they are afraid every day, they have succeeded. I don’t care if there’s only 1,000 of them… they have had an impact on American life through today.

It doesn’t stop unless our political leaders speak out against it…right from the top. One of the things I find tragic is for decades, very few political leaders spoke out against it. Speaking out against racism or anti-Semitism wasn’t going to win you votes. And if it didn’t win you votes, forget about the morality of it all. It was about the practicality of it all. And that’s where I see it festers to this day. And what I would argue is American politicians have had several key moments when they could change the way the world was, and they have failed that every single time because we failed to confront white supremacy, racism and anti-Semitism. We had a chance after the Civil War, and we failed. We had a chance after World War II, and we failed. And we have a chance again, right now, in the wake of everything that has happened. None of this is going to change unless we actually confront our own history and confront it right now, not just for the past, but for the present. 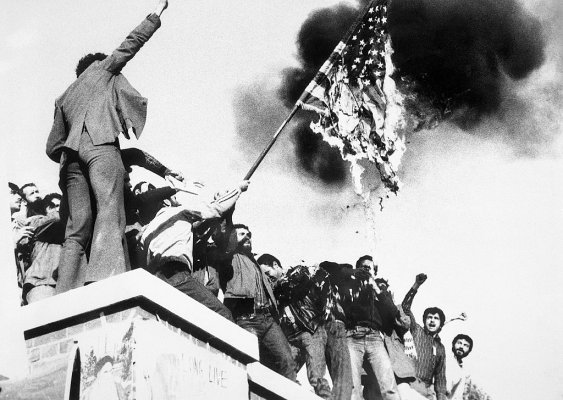 What Happens When Extremism Wins
Next Up: Editor's Pick