Biden Is About to Fulfill His Life’s Dream. What He Inherits Looks More Like a Nightmare

Service members stand guard at the US Capitol ahead of the inauguration of President-elect Joseph R. Biden and Vice President-elect Kamala D. Harris. on Jan. 20, 2021.
Philip Montgomery for TIME
By Philip Elliott

Good morning from a chilly Washington. The U.S. capital looks like a city at war. Military equipment is parked on street corners. Public numbers indicate there are five times as many American men and women in uniform protecting this city than are serving in Iraq and Afghanistan combined. The office buildings in every direction yesterday were covered in plywood, and my walk this morning to the U.S. Capitol was much of the same.

I am currently inside the security perimeter, about 12 feet from the military band playing the prelude to this Mass for democracy and waiting for President-elect Joe Biden, Vice President-elect Kamala Harris and the upper ranks of American politics to carefully and deliberately make their way to a properly socially-distanced Inauguration unlike any we’ve seen. Capitol Hill is a garrison at the moment, with military members sleeping on cots in the marbled hallways. A phalanx of officers stands at the ready to repel anyone who wants to finish what the insurrectionists started on Jan. 6. And just in case, there is razor wire atop the fencing that circles the temple to American democracy.

This is not how Biden would have imagined this day unfolding. In half a century of coveting this moment, the former Senator and Vice President could not have suspected that his inauguration would resemble those of any number of emerging democracies he visited during his years on the Senate Foreign Relations Committee. Military-grade machines are rolling through town. The typically bustling east-west route through D.C.’s lobbying corridor of K Street is a wasteland. The National Mall is closed to the public so that no crowd accidentally assembles. His predecessor isn’t even bothering to say hello, let alone stick around for the ceremony. The tickets to the viewing platforms are tough to come by, and doors opened at 4 a.m. for reporters to get in place with time to spare and seating spaced out.

It took Biden three tries to get his campaign for the nation’s top job right. From the first moments he started staffing his Senate office in 1972, this prize was always nipping in the back of his mind, along with a concurrent, lingering sense of loss, right from the start. It was when Biden was in Washington as a Senator-elect to hire staff with his sister when his family was hit in an auto accident, taking the lives of his first wife and a daughter.

In the end, not a pandemic, a reckoning on race, an economic meltdown or a President who just didn’t know when to quit could keep Biden from seizing this moment. And so he will. As my colleague Molly Ball wrote a year ago, Biden’s resilience through loss is his super power. As Biden prepared yesterday to leave Delaware for the last time without the title of “Mr. President,” his emotions came flooding ahead. Speaking at a National Guard center in New Castle, Del., the incoming commander-in-chief welled up, saying it should have been the late Beau Biden becoming President today, not the man his son called Pop.

“Ladies and gentlemen, I only have one regret: He’s not here, because we should be introducing him as president,” Biden said. It was, as my colleague Charlotte Alter put it in her piece on Biden’s last day of relative normalcy for some time, “it was no surprise that, as he stood at the end of a painful era and at the dawn of a new one, the next American President wiped away a few tears.”

Biden aides have long resisted attempts to contain Biden’s raw emotion. MSNBC’s Brian Williams yesterday rightly noted that America is going to have to deal with the whiplash of going from four years of a President who never betrayed emotion let alone empathy, and now will have a President with the heart of an Irish poet.

The President-elect’s aides have been careful to set expectations low for today’s speech. Biden is as sincere a President as the United States has seen in some time, but he’s not one to channel the majesty of Barack Obama or spark the imagination that John F. Kennedy left as kindling. He will try to unify the country from his first moments in power, leaning into a forward-looking message of getting through this unprecedented moment.

The pageantry of the day will be curtailed in very major ways. A butler — not the outgoing President and First Lady, as is tradition — will greet the Bidens at the front door of the White House. Trump is already on his way to Florida. Instead of lunch with lawmakers at the Capitol, Biden will go to Arlington National Cemetery to pay respects to the fallen military veterans, accompanied by former Presidents and their spouses. Rather than a parade, there will be an online talent show. Rather than balls, there will be Zoom.

The scaled-back pomp makes sense in the middle of a pandemic. There have already been too many super-spreader events in Washington in the Trump era. Biden didn’t care about the optics of crowd sizes during the campaign and mocked Trump’s obsession with his throngs. Scrapping the big hoopla makes sense, from a policy and a political footing.

What matters more than the staging will be the message — and how quickly, if at all, Biden can find an America that is open to his gospel of unity. In the long run, it’s not clear how long D.C. can hold this posture as a conflict zone. 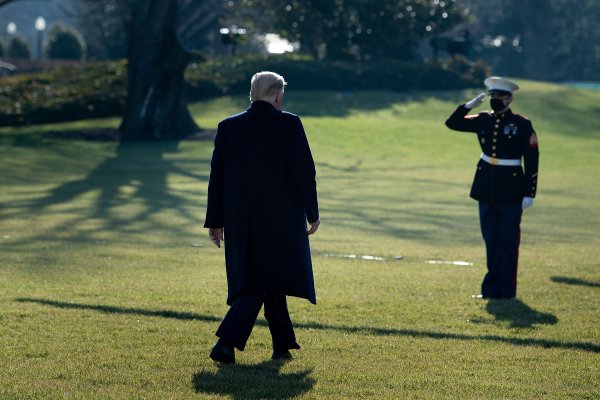