'We Must Have a Third Reconstruction.' Read the Full Text of the Rev. William J. Barber II's Sermon at the Inaugural Prayer Service

Rev. Dr. William J. Barber II alongside with faith leaders, speaks outside of the St. John's Episcopal Church Lafayette Square in Washington, D.C. on June 14, 2020.
Oliver Contreras—The Washington Post/Getty Images
Ideas
By William J. Barber II
Barber is president of Repairers of the Breach and co-chair of the Poor People’s Campaign: A National Call for Moral Revival. He is author of We Are Called to Be a Movement.

The Rev. William J. Barber II delivered the homily at the inaugural prayer service at Washington National Cathedral on Thursday, January 21. His sermon is below.

Lord, please help, hold and harness us for Your purposes and for Your glory. Amen.

Our text this morning comes from the prophet Isaiah, chapter 58. It begins,

“This is the kind of fast day I’m after:

to break the chains of injustice,

get rid of exploitation in the workplace,

sharing your food with the hungry,

inviting the homeless poor into your homes,

putting clothes on the shivering ill-clad…”

And it ends, saying:

“If you get rid of unfair practices,

quit gossiping about other people’s sins,

If you are generous with the hungry

and start giving yourselves to the down-and-out,

Your lives will begin to glow in the darkness…

You’ll use the old rubble of past lives to build anew,

rebuild the foundations from out of your past.

You’ll be known as those who can fix anything,

The text this morning is from the prophet Isaiah. But the prophet, being able to see the future, may have taken his text from the old chitlin’ circuit comic, Moms Mabley, who used to tell what one strawberry said to the other strawberry: “if we hadn’t been in that bed together, we wouldn’t be in this jam today.”

Well, we are in a jam today. Trouble is real, and whether we like it or not, we are in this mess together as a nation.

When this word of the Lord came to Isaiah, his people were also in a jam. Bad leadership, greed, and injustice and lies had led them into trouble, exile, and economic hardship.

In that day, some tried to simply cover up the trouble with false religion and deceit. But God said to the prophet, “Sound the trumpet. Tell the nation of its sin. Tell them that just going through the motions of prayer will not get them out of this jam. I need them to repent of what got them here and turn in a new direction.”

The prophet was saying what Jesus would say about nations caring for the least of these.

The prophet was saying then what Franklin Delano Roosevelt said in the 1930s to an America with one-third of the nation ”ill-housed, ill-clad, and ill-nourished,” besieged by the Great Depression and beset by bigotry and hatred. At such a time as this, FDR said:

Isaiah was saying what Dr. King said to America when we faced a jam in the 1960s:

“The time has come for an all-out world war against poverty. The rich nations must use their vast resources of wealth to develop the underdeveloped, school the unschooled, and feed the unfed. Ultimately a great nation is a compassionate nation.”

The prophet’s basic question to the leadership of his day was the question the economist Joseph Stiglitz has asked: not how much will it cost the government to address inequality, but how much has it cost us not to?

It is the truth Aretha Franklin pointed to when she sang,

We have got to come together

We can rock this earth’s foundation

Holler love across the nation

We proclaim love, our salvation

And so the prophet gives the nation God’s clear guidance out of the jam it is in. Choose first to repent of the policy sin. Then, repair the breach.

The breach, according to the imagery of Isaiah, is when there is a gap in the nation between what is and how God wants things to be.

Transposed to our time, the breach is when we say “one nation under God, indivisible, with liberty and justice for all” with our lips while we see the rich and the poor living in two very different Americas.

The breach would be knowing the only way to ensure domestic tranquility is to establish justice, but pretending we can address the nation’s wounds with simplistic calls for unity.

And every now and then, a nation needs breach repairers to take us forward.

Madame Vice President, you have known the political and social breach caused by racism that tried to place a breach between the intelligence you had and the school you could attend. Your mother fought and organized because she knew this nation’s breach. And both of you know that the only way forward is for breaches to be repaired.

This moment in our nation is not about left, right, or centrist. It should not be about Republicans and Democrats. Even what we saw happen at the Capitol two weeks ago is the results of a long history—a politics of division that was cynically named “positive polarization” by those who thought they could use it for their own political advantage. This strategy of feeding and seeding intentional racial and class divisions into the body politic spilled over into the inevitable violence that ideas of supremacy always produce.

If we want to come out of this jam and move forward together, we cannot accept the racial disparities, violence, and breaches that impact Black, brown, Native and Asian Americans while offering collateral damage to our poor white brothers and sisters and ultimately our entire democracy.

We can’t accept the poverty and low wealth of 140 million Americans before COVID-19 and many more millions since. We must have a Third Reconstruction. We must address the five interlocking injustices of systemic racism, poverty, ecological devastation/denial of health care, the war economy, and the false moral narrative of religious nationalism. These are breaches that must be addressed, and according to the text, repairing the breaches will bring revival.

“If you get rid of unfair practices,” the prophet says.

“If you are generous with the hungry

and start giving yourselves to the down-and-out…”

Then “You’ll be known as repairers of the breach those who can fix anything,

There is hope in the mourning. Jurgen Moltmann once said:

“Faith, wherever it develops into hope, causes not rest but unrest, not patience but impatience… Those who hope in God can no longer put up with reality as it is, but begin to suffer under it, to contradict it.”

We don’t have to put up with things as they are. We can contradict the breach with every prayer, every policy, every sermon from every pulpit, and every call to the people.

If we the people, with God’s help, repair the breach, revival and renewal will come. Weeping and mourning may endure in this night of our discontent, but joy will come in the morning. Love and light will burst through. God will hear our prayers if we do the work of repairing society’s breach.

No, America has never yet been all that she has hoped to be. But right here, right now, a Third Reconstruction is possible if we choose.

So let us ask God again what that great preacher and hymn writer Harry Emerson Fosdick asked in the midst of the Great Depression, when the nation was in a jam and needed some breach repairers. He wrote and sang and prayed:

God of grace and God of glory,

on thy people pour thy power…

bend our pride to thy control;

rich in things and poor in soul.

Save us from weak resignation

to the evils we deplore;

let the search for thy salvation

be our glory evermore.

Grant us wisdom, grant us courage,

for the facing of this hour,

for the facing of this hour.

Yes, God, grant us wisdom and grant us courage until thoughts of destroying one another give way to deeds of embracing each other; until our policies prove our promise of equal justice under law; until we decide too many have been hurting too long.

Grant us courage until in every way we show in our democratic process that everybody has a right to live; until we lift from the bottom so that everybody rises; until the stones that the builder rejected become the chief cornerstone of a new social reality.

Please God, grant us wisdom, grant us courage, until the poor are lifted, the sick are healed, children are protected, and civil rights and human rights never neglected. Grant us wisdom for the facing of this hour until love and justice are never rejected.

This is the only path to domestic tranquility and healing. So God, grant us as a people; grant us as an entire nation, grant our new President; grant our new Vice President; grant every preacher; grant every politician; grant every person, Black and white, Latino, Native, Asian, Jewish, Muslim, Christian, Hindu, people of faith, not of faith but with a moral conscience, every human being created by God, documented or undocumented; gay, straight or trans, young or old. And what a day it will be when our children’s children call us what you have called us to be: repairers of the breach. Amen. 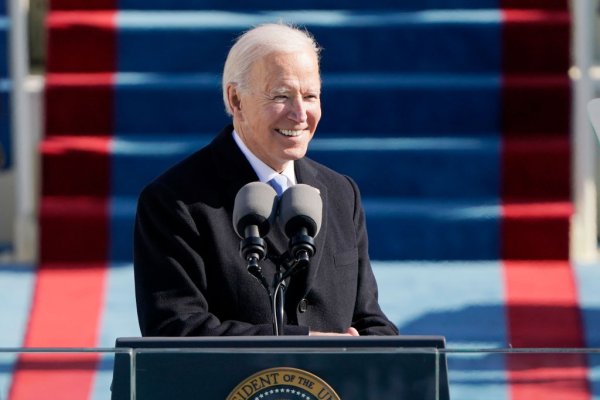 Biden's Inauguration Should Give Us New Hope
Next Up: Editor's Pick