Madeleine Albright: 'Us vs. Them' Thinking Is Tearing America Apart. But Here's Why I'm Still Hopeful About the Future

The East Front of the Capitol, which was damaged during the insurrection the week prior, in Washington, on Jan.13, 2020.
Gabriella Demczuk for TIME
Ideas
By Madeleine Albright
Albright is a former U.S. Secretary of State and author of Hell and Other Destinations

At this moment of shock, sadness, and hope, it might be wise to reflect on the two most dangerous words in the human vocabulary: “us” and “them.” Last week, we received a dramatic reminder of this peril when our nation’s political divisions erupted into a spectacle of lawlessness on Capitol Hill.

The impulse to choose sides is inherent in our species. Psychologists point to our desire to be safe by joining groups with which we have an affinity, our fear of the unknown, and our vanity; we want to think of ourselves as better or smarter than the other. These traits are ingrained. For better or worse, we are clannish beings, and this has done much to shape our history.

As a child of Europe, my own life was knocked off course early on by Hitler’s race-based conception of “us vs. them,” and later by Stalin’s more ideological one. While in government, my daily preoccupations were with blood-drenched rivalries in the Balkans, Caucasus, Africa, and Middle East. In those years, the United States worked hard to help countries in faraway places to cool clashes related to ethnicity, religion, race, and political philosophy. In so doing, we pointed to our nation as a model; often citing the motto E Pluribus Unum, out of many, one.

Now, even as we prepare for the inauguration of a new president, we do not see ourselves as much of a model. Immensely destructive forces have been unleashed in our country. The trend has been evident for at least a quarter century, but has, in the past four years, assumed the strength of a hurricane. By now, our nerve endings have been rubbed raw. Political rallies have devolved into exhibitions of hate. Public figures are threatened and harassed, their homes vandalized. Debates have been supplanted by shouting matches. At the very highest level, democratic institutions have been undermined and mocked. Surveys indicate that a growing number of Americans view partisan opponents not only as misguided but also as agents of evil. Each day, our biases are reinforced by the broadcast news and social media sources we select and by the likeminded people with whom we associate.

Many among us would apparently prefer to live in a country where the rest of us, i.e. “them,” have no place. This attitude led directly to the debacle we witnessed on January 6, when a mob broke into the U.S. Capitol in support of a Republican president’s effort to reverse the lawful result of a national election. One imagines that Abraham Lincoln, the party’s founder, wept.

In today’s not-so-United States, we must acknowledge that our divisions extend far beyond matters of political affiliation to include religion, race, gender, education, ethnicity, sexual orientation, and urban vs. rural. Confronted by this reality, many citizens are tempted either to retreat more deeply into their respective group identities or to insist piously that such categories are irrelevant and should not matter. Neither approach works. Exacerbating our differences is one road to disaster; denying them is another. Instead of fantasizing about a harmony that is out of reach, we should focus on ensuring that our inevitable disagreements lead whenever possible to constructive outcomes. Democracy was designed to aid such a process, based on the premise – severely tested in recent years – that voters will ultimately prefer builders to bullies and healers to heels.

As I approach the midpoint of my ninth decade, I see glimmers of light amid the darkness. Voter turnout this year was at a record high. President-elect Biden has been setting exactly the right tone and judges and officials in key swing states deserve medals for valor. The recent pandemic relief bill was a gift, albeit an imperfect one, from moderates in both parties. Senator McConnell and some other Republican leaders, after waiting far too long, ultimately chose loyalty to the Constitution over obeisance to a demented commander-in-chief. We should be conscious, too, that America has shown resilience in the past when dealing with sharp divisions, up to and including a civil war. As a country, we have a habit of veering in one direction or another before recovering our sense of balance. In my time as an adult, our electorate has switched control of the White House from one party to another nine times.

It should be clear given both our national experience (and world history) that no group has a monopoly on truth or virtue. However we conceive of “us,” we have ample grounds for humility. I can speak only for myself, but I have been wrong many times. My attitudes and opinions are always changing as I learn more and perhaps forget a few things here and there. There is no question that we all have a right to quarrel with one another; that’s the democratic way. But we also have a responsibility to talk frankly and to listen carefully, to recognize our own faults, and to refrain from pinning dehumanizing labels on those with whom we disagree. It would be helpful, too, if the professional political class would stop describing America as split between red states and blue. The habit is lazy and unhelpful, and the picture it creates is at odds with the shared needs, aspirations, and values of most citizens. Notwithstanding the recent tumult, we remain one country, not two.

There is immense folly in thinking that, just because we have important differences, Americans have nothing equally or more important in common. Lacking that conviction, we would have neither the ability nor the credibility to lead internationally. At home, only by acting on that conviction can we avoid paralysis. Going forward, let us advocate vigorously on behalf of causes that concern us as individuals or groups; but let us also never forget that we belong in addition to a larger circle. No matter how we define “us”; no matter how we define “them”; “We the People,” is an inclusive phrase. 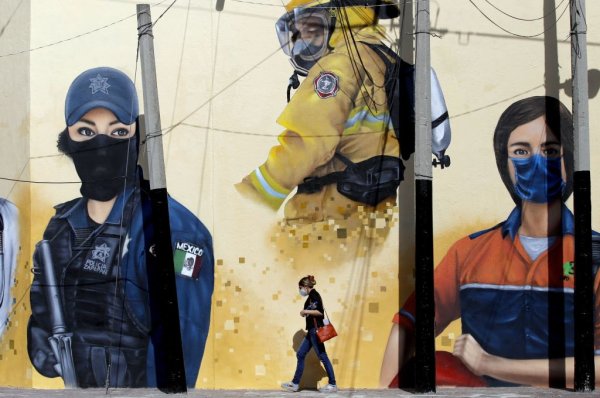 Women Must Be Equal Partners Rebuilding After COVID-19
Next Up: Editor's Pick