Angela Merkel's CDU Party Is Choosing a New Leader. Whoever Wins Might Become Germany's Next Chancellor

Chancellor Angela Merkel has been one of Germany’s most influential leaders and a standard setter for Europe for 16 years. Now the party that kept her at the helm of Europe’s largest economy must decide who might fill her shoes.

The center-right Christian Democratic Union (CDU), which has led Germany‘s federal government for the past 15 years, will elect a new leader at a virtual congress on Jan. 15 and 16. Whoever wins has a strong chance of succeeding Merkel, 66, who will step down after four terms as chancellor after Sept. 26’s federal election.

Current CDU leader Annegret Kramp-Karrenbauer—also known as AKK and sometimes nicknamed “mini-Merkel“—had been handpicked by the chancellor to run as her successor. But in February Kramp-Karrenbauer surprised fellow CDU members by announcing that she would step down as party leader and not run for chancellor. The move came after a controversial local election in early February that led members of her party in the eastern state of Thuringia to co-operate with Alternative for Deutschland (AfD), a far-right anti-immigration party, in defiance of her wishes.

Three candidates are now on the ballot to lead the party: Friedrich Merz, a conservative and Merkel antagonist, Armin Laschet, a moderate and Merkel loyalist, and Norbert Röttgen, a leading foreign policy expert.

According to a January poll by ARD-DeutchlandTrend, a leading political opinion surveyor in Germany, 27 per cent of CDU supporters polled were in favor of Merz, 22 per cent for Röttgen and 18 per cent for Armin Laschet. But the outcome will not be decided by the public. The only votes that matter are those cast by 1,001 CDU delegates, including mayors, lawmakers and councillors. Here’s what to know about each of the candidates:

Merz was a leading figure in the CDU in the 1990s and early 2000s, earning a reputation as a pro-market reformer. He left politics in 2009 after being marginalized by the chancellor and moved into the private sector, becoming a multimillionaire as he rose to the rank of chairman of investment management firm BlackRock Germany. Two years ago, he returned to politics to get an early start in the CDU leadership race.

These days Merz is seen by many people – even in his own party – as “out of step with the times” due to his defense of hardline conservative values, says Pepijn Bergsen, a research fellow specializing in Germany at Chatham House, a U.K.-based international affairs think tank. “He’s running now because he thinks that Merkel has moved the party too much to the center,” says Bergsen.

In February, Merz pledged to “integrate those on the margins into the centre of the party”. He has called for a debate on asylum guaranties in Germany’s constitution and promised tax breaks for Germany’s “hard workers”.

The premier of Germany’s Western, industrial state of North Rhine-Westphalia (NRW), has presented himself as Merkel’s continuity candidate and, until recently, was the frontrunner. He is “closest politically to Merkel” and is the only candidate out of the three who hasn’t been pushed out of front-line politics by the chancellor, says Bergsen. Laschet, 59, has said that one of Germany’s key challenges is remaining an industrial power while fighting climate change, and creating stronger social cohesion. “There is a lot of dissatisfaction in society, so much aggression, so much anger, so much hate,” he said, according to a BBC report in February.

In an apparent sign of her backing, Merkel said that he had “the tools” for chancellorship in August. Reuters surveyed two dozen senior figures in the CDU in October and found they all expected Laschet to win. But the second wave of Covid-19 in Germany has changed everything. Since October, the total number of Covid-19 cases and deaths has roughly quadrupled, according to Johns Hopkins University data. Laschet’s region of NRW, Germany’s most populous state, is one of the country’s hardest hit areas.

The state premier has been a vocal proponent of loosening lockdown restrictions and in June dismissed any link between easing the restrictions and the spike in virus cases, only to have to help organize the second lockdown in the fall. He recently came under fire, accused of nepotism for awarding PPE contracts to a fashion company that pays his son to show its clothes on his Instagram channel. Laschet called the claims “obscene” and politically motivated.

Röttgen, a strong critic of Merkel’s foreign policy, has been a Member of the German Parliament since 1994 and currently serves as Chairman of the Foreign Affairs Committee of the Bundestag. Merkel fired him from his post as German environment minister (2009-2012) when he lost a key election in NRW in 2012. The 55-year old’s candidacy for CDU leadership is seen as a long shot by many Germans. But Bergsen says his chances have improved “considerably” since the start of the race.

Röttgen is running on a “largely foreign policy focused campaign,” says Bergsen. He has called for a stronger German presence in global security missions, a close relationship with the U.K. after Brexit and has urged Merkel to take a tougher approach toward Chinese technology company Huawei. The foreign policy expert is not a household name in Germany, but he is one of the best known and well-respected German conservatives internationally. He has been a frank critic of the erosion of the country’s relations with the U.S. – Germany’s biggest export market – under President Donald Trump.

Will whoever wins this competition succeed Merkel?

Not necessarily. The party’s leader is usually its candidate for the chancellorship, but popularity surveys show that all three candidates poll behind Markus Soeder, head of the Christian Social Union (CSU), CDU’s Bavarian sister party, and Jens Spahn, the health minister whose relatively successful handling of the pandemic has seen his popularity soar. Spahn, 40, is condering standing as a candidate to succeed Merkel, according to reports in the daily German tabloid newspaper, Bild in early January. But Soeder, whose party won plaudits for taking a hard line approach to stem the spread of Covid-19 in wealthy Bavaria, has so far ruled out running.

According to a December poll by Kantar, a global public opinion firm, published in Bild, Spahn had surpassed Merkel as the country’s most popular politician. 52 per cent of respondents said Spahn should play a major role in German politics in 2021 up from 28 per cent at the end of 2019. Merkel’s approval rating was 51 per cent, up 11 percent from the previous year. Scoring 50 per cent, Soeder was the third-most popular politician, while Merz scored 37 per cent in sixth place, Laschet 31 per cent in eighth and Roettgen 29 per cent in ninth.

The CDU and CSU are expected to hold talks soon to decide on a collective candidate for the chancellorship in the federal elections planned for Sept. 26. This is usually the leader of the much larger CDU party. Their choice will have a far reaching importance not only in Germany but in Europe. The E.U. needs Germany’s help in reviving its economy from its deepest recessions since World War Two and restoring transatlantic cooperation after four years of Trump’s “America First” policy.

The original version of this story misstated Friedrich Merz’s political position. Two years ago, he returned to politics, not to the Bundestag. 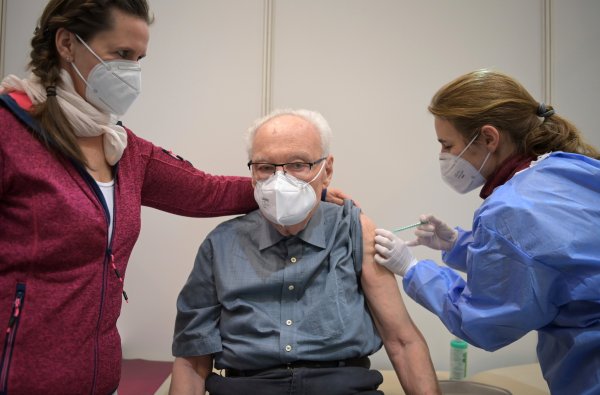 Germany Extends COVID-19 Lockdown to Jan. 31
Next Up: Editor's Pick