Missouri Sen. Josh Hawley at a joint session of Congress to count the Electoral College votes of the 2020 presidential election in the House Chamber in Washington, on Jan. 6, 2021.
Stefani Reynolds—Bloomberg/Getty Images
By Annabel Gutterman and Anna Purna Kambhampaty

After Missouri Republican Senator Josh Hawley played a leading role in the Electoral College challenge at the center of the violent Jan. 6 insurrection of the U.S. Capitol, the publisher of his upcoming book announced its cancellation. Bookseller Hannah Oliver Depp felt relieved when she saw the news on Thursday. But she would rather the book never have been slated for publication.

“I’m very firmly in the camp of, ‘Hey, maybe don’t sign those contracts to begin with.’ But the second best option is to read the room and cancel the book,” Depp, owner of Loyalty Books in Washington, D.C. and Silver Spring, M.D., tells TIME.

Depp is one of many booksellers who are anxious to see change after years of witnessing books by and about members of President Donald Trump’s Administration dominate the discourse and bestseller lists, even if some feel pressure to sell these books in their stores. These critics disagree with lending a platform and financial opportunities to authors promoting incendiary ideas, withholding urgent information for their own gain or profiting from their roles in policies that have separated families and put marginalized groups in danger. “I’m sympathetic to publishers who are facing unprecedented everything right now because we all are,” Depp says. “But the fact of the matter is that they are publishing without considering the repercussions of what they publish—and they’ve been doing that for some time.”

Some of the books written during the Trump Administration by current and former officials, as well as top Washington reporters and other insiders, have included inaccurate reporting or revealed crucial information about the Administration months after the fact. In 2018, Center Street published Trump: The Blue Collar President by Anthony Scaramucci, in which the former White House Communications Director describes Trump’s father as hardworking and honest, though he was later revealed to be part of fraudulent tax schemes. In June, Simon & Schuster published John Bolton’s The Room Where It Happened, which included severe criticism of Trump’s presidency and foreign policy approach—information that many believed would have been more useful during Trump’s impeachment hearings months prior, where the former national security adviser had refused to testify. “What might have been blockbuster testimony in January or February seems more historical than contemporary today,” one reviewer wrote in NPR. “The Bolton revelations now have far less impact than they might have had.”

Similarly, in September, Simon & Schuster also released Bob Woodward’s Rage, which revealed details of the President’s knowledge of how deadly the coronavirus was from a February phone call and his plans to downplay it during another call the following month. When asked why he didn’t inform the public as soon as this information was verified, Woodward responded that he had wanted to share his reporting in complete book form to provide as much possible context before the election. “He held onto information that was vital to the public good because of the system that incentivized him to do so,” Danny Caine, owner of Raven Book Store in Lawrence, Kans., says.

Over the course of Trump’s presidency, publishers have released books from a slate of former White House staff and Cabinet members, including Sarah Huckabee Sanders, Sean Spicer, Andrew McCabe, David Shulkin and even an official who retained a shield of anonymity (later revealed to be former Homeland Security official Miles Taylor). The financial deals secured by some of these authors have been massive—Bolton reportedly received an advance of over $2 million for his—and many have dominated the bestseller lists, bringing in further profits. When Bolton’s book was published in June, Simon & Schuster sold more than 780,000 copies in just one week. When Mary Trump’s explosive memoir Too Much and Never Enough (also published by Simon & Schuster) debuted the following month, it set a new sales record for the publisher, selling over 950,000 copies on its first day.

The cancellation of Hawley’s book underscores the gravity of this debate. Simon & Schuster was set to publish The Tyranny of Big Tech, about technology corporations like Google and Facebook, in June. Those who called for the book’s cancellation feared that its publication would legitimize his actions at the Capitol while giving him money and a greater platform, which can be harmful given his recent actions. On Thursday, Simon & Schuster released a statement of its decision to cancel publication. “As a publisher, it will always be our mission to amplify a variety of voices and viewpoints: At the same time we take seriously our larger public responsibility as citizens, and cannot support Senator Hawley after his role in what became a dangerous threat,” the publishing company said.

In response, Hawley posted a statement on Twitter, claiming that the publisher’s decision was an attack on his First Amendment rights and suggesting that he plans to sue. Simon & Schuster responded with a statement defending its right to cancel the book. (The publisher did not comment beyond its two statements.)

Josh Cook, co-owner of Porter Square Books in Cambridge, Mass., believes that politicians like Hawley should not have a relationship with the publishing industry. “If we don’t want to empower white supremacists and fascists, we shouldn’t give them a platform and we shouldn’t give them a revenue stream and publishing their books does both,” Cook tells TIME in an email.

Because of these books’ financial value and popularity, for booksellers, the issue isn’t as simple as choosing not to carry a book they feel might be unethical—Cook explains that his store does not have an official policy on what titles it purchases, but he hopes to develop one soon. These tensions are especially nuanced for Depp as a Black and queer bookseller who runs a store with a mission to amplify books that represent communities of color and queerness. “The typical author in people’s mind, that’s the minority at my store,” Depp tells TIME. “So I have to figure out the balance, because this is a business.” Big political books can bring in a significant amount of money for an independent bookstore, so the decision not to carry a given title isn’t one that Depp makes lightly. And while she’s glad that Simon & Schuster canceled Hawley’s, Depp doesn’t consider that action to indicate a turning point for an industry already undergoing social justice and racial reckonings. “This in particular doesn’t signal anything to me other than a wise move on a publisher’s part to not publish a book that wasn’t going to be worth it,” she says.

This is not the first time in recent memory that a major publisher has dropped a book under public pressure. In 2017, Simon & Schuster canceled alt-right personality Milo Yiannopoulos’ book deal after a video of him condoning pedophilia circulated online. And last March, employees from Hachette Book Group walked out in retaliation to the announced publication of Woody Allen’s memoir in April. Hachette dropped the book—but it found a new home at Arcade Publishing, where it was published.

The controversy over Hawley’s book deal and its subsequent cancellation is evidence that the role that public opinion and reaction plays in the publishing process is gaining more weight. “We are living in a world where publishers increasingly question whether publishing a book will create a backlash,” says John Warren, director of George Washington University’s MPS in Publishing program, adding that a question always on publishers’ minds is whether or not a book will sell. Greater sensitivity can be a good thing, he says, allowing publishers to more critically choose which voices to amplify. But he cautions that it also poses a potential issue when it comes to censoring ideas we don’t agree with. “Our society benefits greatly from the free exchange of ideas, and publishers play a critical role in this exchange,” he says, citing the American Library Association and other publishing organizations that seek to protect free speech, particularly in books. “If groups on the right and on the left succeed in banning controversial books from libraries, schools and bookstores, ultimately our society will suffer.”

Depp says she hopes what’s going on in the country will force publishing leaders to continue looking at their decision-making processes on a broad scale. She wants them to consider why they make book deals with certain people over others, and what kind of advances they offer to what kinds of people. “What has to be fought for and justify itself over and over again? Who was allowed to not make out their advance and yet still gets three or four more books published until they hit it big?” she asks. “Who do we extend that grace to as an industry, and who do we not?”

Write to Annabel Gutterman at annabel.gutterman@time.com and Anna Purna Kambhampaty at Anna.kambhampaty@time.com. 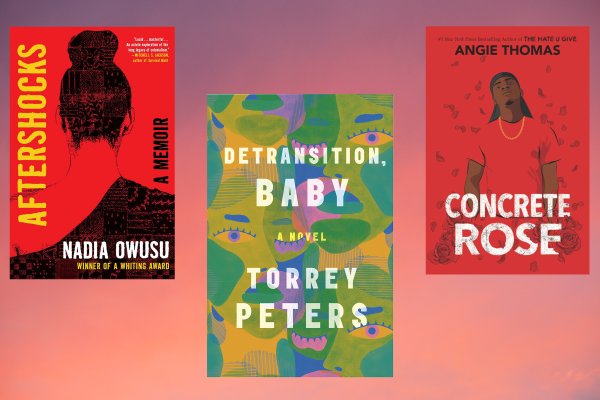 Here Are the 10 New Books You Should Read in January
Next Up: Editor's Pick