A caregiver shows a dose of 5ml of the Pfizer-BioNTech COVID-19 vaccine at Korian Les Amandiers EHPAD Housing Establishment for Dependant Elderly People during a vaccination campaign to fight against the spread of COVID-19 in Paris, France, on Jan. 7, 2021.
Aurelien Morissard—Xinhua/Getty Images
By SAMUEL PETREQUIN and MIKE CORDER/ AP

(BRUSSELS) — The European Union’s drug agency on Friday approved doctors drawing up to six doses from each vial of the coronavirus vaccine made by BioNTech-Pfizer, a move that could speed up the pace of vaccinations in the 27-nation bloc.

The European Medicines Agency said its human medicines committee recommended updating the product information for the vaccine to clarify that each vial contains six doses instead of the five that were advised when it originally greenlighted the Pfizer-BioNTech vaccine on Dec. 21.

German Health Ministry spokesman Hanno Kautz told reporters in Berlin that the change would come into effect immediately, boosting available doses of the vaccine by 20%.

Many doctors across the EU have already been drawing six doses of the vaccine from each vial, a practice that is already permitted in the United States, Britain and elsewhere.

Pharmaceutical companies regularly put more vaccine than necessary into vials so minimum dosage can be ensured even if there is some spillage.

The EU commission later detailed in a statement that it offered to member states to purchase an additional 200 million doses of the vaccine, with the option to acquire another 100 million doses.

“This would enable the EU to purchase up to 600 million doses of this vaccine, which is already being used across the EU. The additional doses will be delivered starting in the second quarter of 2021,” the EU said. Von der Leyen said 75 million of the extra doses would be available during the second quarter, with the rest being delivered throughout 2021.

Combined with a contract with Moderna for its vaccine, the EU now has the capacity to vaccinate 380 million people, Von der Leyen said, more than 80% of the EU’s population.

The EU has sealed six vaccine contracts for up to 2 billion doses, with Moderna, AstraZeneca, Sanofi-GSK, Janssen Pharmaceutica NV, Pfizer-BioNTech and CureVac. But only the Pfizer-BioNTech and Moderna vaccines have been approved for use so far in the 27-nation bloc.

Von der Leyen’s announcement came amid growing criticism, notably in Germany, about the decision to let the commission handle vaccine purchases for all EU member nations. Vaccination programs in the EU have gotten off to a slow start, and some EU members have been quick to blame the European Commission for a perceived failure to deliver the right number of doses.

The EU has defended its strategy, insisting that vaccination programs have just started and that large deliveries are foreseen for around April.

“We were faced with a situation where we had huge demand, but the production capacity had not kept pace with that as yet. Now, we have a positive step forward,” von der Leyen said.

Amid reports that some EU countries tried to secure separate deals with vaccine manufacturers, von der Leyen also made clear that such negotiations would violate the agreement accepted by all the bloc’s members. 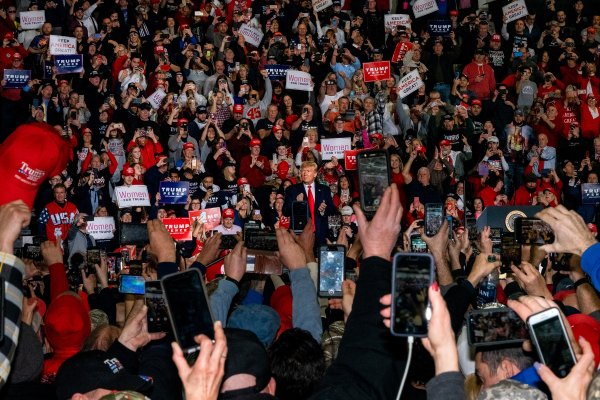 A Photographer's Diary of 12 Turbulent Months In Trump's America
Next Up: Editor's Pick