'We Did That': Inside the WNBA’s Strategy to Support Raphael Warnock—and Help Democrats Win the Senate

On August 4 players from the Atlanta Dream and Phoenix Mercury appeared on national television wearing black shirts, with an all-caps message, written in white font, on the front: VOTE WARNOCK. Players across the WNBA started donning those shirts that day, and the “Vote Warnock” message spread on social media. Elizabeth Williams, a forward for the Atlanta Dream, recalls some confusion at the time. “People were like, what is a Warnock?” she says.

WNBA players have been at the forefront of social-justice movements in sports in recent years—players were among the first, in 2016, to wear “Black Lives Matter” warm-up shirts before games several incidents of police violence—but this year they took their activism to a new level. Following reports that the WNBA planned to paint Black Lives Matter on their courts in WNBA bubble—or “wubble”—in Bradenton, Fla., Loeffler wrote a letter in early July to WNBA commissioner Cathy Engelbert criticizing the league’s embrace of the movement; the next evening, she called Black Lives Matter “divisive” and “Marxist” during a Fox News interview. WNBA players quickly condemned Loeffler’s stance, and later that month WNBA dedicated its 2020 season to Breonna Taylor, the Louisville, Ky., medical worker killed by police in a botched raid of her home. Then they took it a step further and wore the shirts.

Several factors contributed to Warnock’s win. Barack Obama’s endorsement surely helped. His criminal justice reform message resonated. But Angele Delevoye, a PhD candidate in political science and quantitative methods at Yale has also concluded through data analysis that the WNBA played a role in Warnock’s ascension. “The WNBA helped generate momentum,” she says. “The WNBA has a long history of activism. So the players were ready for this moment.”

Dream shooting guard Tiffany Hayes agrees. “We were definitely the loudest voice,” says Hayes. “We were the sternest voice. And we backed what we said. I don’t see any other hand that was bigger.”

“I Knew Right Away That I Wasn’t With It”

Loeffler’s anti-Black Lives Matter stance angered many WNBA players, around 70% of whom are Black. “E-N-O-U-G-H! O-U-T!” the WNBA players’ union tweeted. Atlanta Dream guard Renee Montgomery, who already opted out of playing the 2020 season to focus on social-justice reform, wrote on Twitter: “I’m pretty sad to see that my team ownership is not supportive of the movement and all that it stands for. I was already sitting out this season and this is an example of why. I would love to have a conversation with you about the matter if you’re down?” (They never spoke.) “I’ve been around her, and it just never came across my mind that this was who I was working for, so to speak,” says Hayes. “So it was kind of disappointing, kind of sad to learn something like that. And I knew right away that I wasn’t with it.”

The Dream players met on Zoom. “There was a lot of frustration,” says Williams. “We had a lot of free agents this year, so for them, it was, ‘O.K., I came to this new team, and this is the first thing I have to deal with?’ There was a lot of emotion. It wasn’t an easy conversation to have.”

The Dream players, however, resolved to respond positively. “I think there was that level of determination, like all right, at the end of the day we are strong women who are professional athletes, and we’re going to do our job and continue to inspire through our play and we’re also going to use our voices off the court,” says Williams. “So despite the frustration and disappointment and all that, we still wanted to make sure that we were intentional about our words and our actions that would follow.”

“Just being on that call, I knew some good things were going to happen,” says Montgomery. “Just talking to the players, hearing how passionate they were about making sure their voices were heard.” The Dream players released a short team statement on July 10, three days after Loeffler’s letter went public. “Our team is united in the Movement for Black Lives,” it read, in part. “It is not extreme to demand change after centuries of inequality. This is not a political statement. This is a statement of humanity. Black lives matter.”

As the summer progressed, however, players began to believe that Loeffler was just playing politics. Her attacks on the progressive WNBA played to Georgia’s conservative base—and could steal votes away from her main Republican opponent in the special election, former Republican Congressman Doug Collins. Loeffler could also cast calls for her removal as Dream owner as a symptom of “cancel culture” intolerant of opposing views.

“It was like, ‘oh s–t,'” says Seattle Storm point guard Sue Bird, who won her fourth WNBA title this season. “The more we fight her—people were asking, ‘Should she be an owner?’— the more we were basically calling for her head, the more it was just playing into her hands. She got to show the state of Georgia, ‘Oh, look at me, I am standing up to these people and telling them to keep politics out of sports.’ It was ironic that this woman was saying, ‘Keep politics out of sports,’ when she was actually using us as a political pawn.”

Bird and other players decided to shift their focus from Loeffler to Warnock. “We recognized in our work with the Say Her Name movement, there’s power in saying Breonna Taylor’s name,” says Williams. “And so you can do the opposite and not say someone’s name. We kind embraced that and haven’t shied away from that since.”

They consulted with Stacey Abrams, a member of the WNBA players’ association’s board of advocates who vouched for Warnock. On two Zoom calls—one involving the executive committee of the union, the other open to all players—the players vetted Warnock. “After that, players were like, ‘O.K., this guy’s legit,'” says Williams. “He was so confident, saying that ‘even if I don’t win in November, I am going to win in January.'”

That’s exactly what happened: Warnock failed to receive the requisite vote in the November 3 general election—more than 50%—to avoid a runoff, but prevailed over Loeffler in January 50.8% to 49.2%. “He supported all the things that we supported as it related to criminal justice reform, women’s health, reproductive rights all these things that we had talked about as WNBA players,” says Williams. “And so once players liked him, we were like, ‘How do we show our support?'”

Montgomery was excited but was also apprehensive. “There’s always that stigma of ‘stick to sports,’ ‘shut up and dribble.’ And we’re not talking about just going against maybe a sponsor of the team or someone that’s like a little bit connected to the team. We’re literally talking about a team owner,” Montgomery says. “So there was a power dynamic there where she is my boss and you just know that people that have money have a lot of connections. And you could end up being blackballed and not even know what happened.”

Many people, however, have seemed to embrace the WNBA’s activism. Average viewership rose 68% going into the WNBA Finals. Players worked to increase voter turnout—and recruit poll workers for both the general election and in Georgia. They posted about the elections on social media. Hayes helped host a voter-registration event at the gym she owns in Atlanta. Williams worked a phone bank. Montgomery talked to students throughout the state, explaining the particular importance of the Georgia runoff to the future of the country.

“I really wanted to make sure people understood you can’t sit this one out,” Montgomery says. The day before the runoff, More Than A Vote, the voting-rights organization started by LeBron James, released a get-out-the-vote ad voiced by Montgomery, Hayes and Williams and fellow Dream player Courtney Williams.

Back in the summer, Montgomery had asked Bird to send her a “Vote Warnock” T-shirt from the wubble. She’s still waiting for it. “I need to get a shirt,” she says. “But it shouldn’t even say ‘Vote Warnock’ anymore. I need to have a shirt that says, ‘We Did That.'” — with reporting by Francesca Trianni 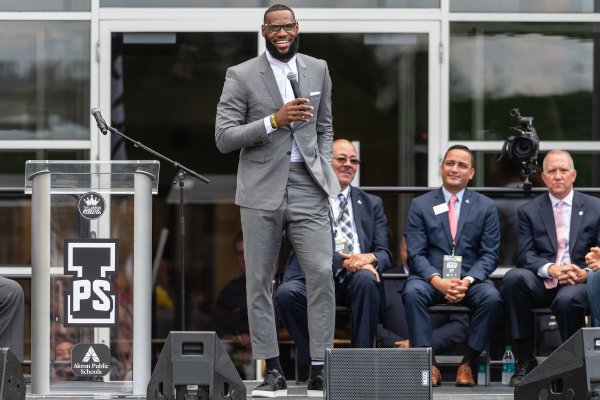